Sarah Deragon envisioned The Identity Project as one that “pushes up against the preconceived notions of what it is to be LGBTQ in today’s society.

Photographs courtesy of Sarah Deragon from her project, The Identity Project.

Sarah Deragon’s Identity Project — a prolific portrait series of queer-identified people — experienced its first taste of relative Internet fame in the spring of 2014, when it circulated through various progressive and feminist-oriented blogs and news feeds. Deragon’s work exemplifies a rising number of portrait photographers who use craft to diversify public representations of typically marginalized communities. An effective way to do this is through circulating such projects through viral news blogs and social media platforms, which are often more accessible than physical galleries.

Given that today’s progressive cultural climate is simultaneously obsessed with both creating and eradicating terms of self-identification, San Francisco photographer Sarah Deragon’s Identity Project is a highly relevant representation of queer subculture.  The project is comprised of over 200 simple portraits that feature individuals, couples and groups, most shot against neutral land- or city-scapes. The Identity Project, which began around San Francisco’s Bay Area, has since grown to include participants from both Chicago and Portland, Oregon. Plans to shoot in smaller U.S. cities and international locations are forthcoming, as Deragon aspires to explore how queerness blossoms and echoes itself cross-culturally.

Underpinned by a longtime fascination around identity’s simultaneous function as both a cohesive and divisive indicator, Sarah Deragon envisioned The Identity Project as one that “pushes up against the preconceived notions of what it is to be LGBTQ in today’s society,” per the artist’s official statement. Deragon’s interest here is further evidenced by the creative, self-issued labels that sit just below each subject’s portrait, which — when considered collectively — speak as strongly to her work’s aim as do her portraits themselves.  While many subjects’ designations reference modes of dress, genders and even sexual habits — “Poly Fag Queermo,” for instance — most work a sort of double shift, illustrating holistic personal identities that include dietary preferences, political ideologies, body size, race, ethnicity, relationship status,  personality traits, and even hair color.  Deragon’s claim that labels can be sources of pride and connection — as opposed to limiting designations — is evident in the enthusiasm that participants seem to exude when asked to describe themselves, as opposed to be described.  It is hard not to connect the easy, contagious happiness captured in her subjects with the joy that accompanies unbridled self-expression, especially for a community so used to being pigeonholed, routinely dismissed, or in some cases rendered invisible.

As Deragon comments in an interview for PolicyMic, “Identity is far more nuanced than [the LGBTQ umbrella, and] this photo project shows how incredibly diverse and creative we are.”  Her portraits have enjoyed both viral success and overwhelmingly positive press from a variety of publications, including BUST, The Huffington Post, The Bold Italic, and Curve.  What they and their success also indicate is a broader cultural shift away from a more perfunctory, either/or understanding of the LGBT community and towards one which both celebrates fluidity and implicitly questions whether queer as an identifier should signify something past simple gender or sexual difference.

It is hard not to view Deragon’s photographs en masse, however, especially when perusing the project’s popular online archive.  The layout of her portraits evokes that of a high school yearbook — a face stands out for a brief moment before being supplanted by another farther down the page, some inevitably being more eccentric or eye-catching than others. Given the sheer immensity of her subjects, as well as the images’ close juxtaposition, individuals readily become lost amidst a sea of semi-likenesses, most of whom present as butch, femme or otherwise more androgynous.  In fact, it is only through the sheer enormity of Deragon’s subject pool that repeated physical and stylistic traits begin to illustrate an unspoken yet oft-acknowledged truth: that while sexuality and gender may be theoretically invisible markers of difference, queerness is as much an aesthetic construct as it is a personal identity.  What is intriguing about Deragon’s work is the tension it elucidates between assimilation and individuality, which in turn invokes larger questions about aesthetics’ role within queer subculture.

Photo-documentary series like Deragon’s illustrate the multiplicity of identities and meanings that may proliferate from typically marginalized communities. Given that the projects’ varied participants claim a unifying identity, The Identity Project aims to imply that there is no one “right” way through which to appropriately exemplify a queer identity. Yet the critical discourse surrounding photo-documentaries like Deragon’s echoes larger conversations within contemporary ethnographic research. Namely, how to accurately capture a culture’s essence without devolving into false representation or reductionism.  Whether Deragon’s portraits do indeed celebrate diversity or merely reiterate proper avenues through which to perform queerness is, I think, up for debate. 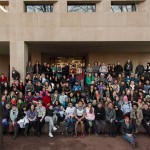 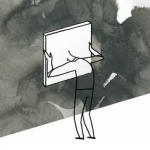