A New Hope (For Future Filmmakers)

George Lucas at the Rubloff Auditorium

Every year, the SAIC community has an opportunity to listen to well-known artists and scholars who are invited to the school as guest speakers. This year, SAIC students were particularly excited about the lecture by George Lucas—film director, screenwriter, producer, and entrepreneur.

The lecture was limited exclusively to SAIC students, faculty, and staff; due to the limited capacity of the venue, the Rubloff Auditorium, tickets — which were distributed to the community for free — were required to enter. However, the school quickly ran out of them within the first few days. Naturally, a black market of “sell/buy George Lucas ticket” social media postings emerged. On the day of the lecture, some of the students even stood in the line outside of Rubloff Auditorium for almost two hours to secure a seat in the front row. Somebody even brought a toy lightsaber and raised it up in the air to greet George Lucas as he entered the scene.

The event was a conversation (in an interview format) between George Lucas and President Walter Massey, whose questions helped to structure the talk. At the beginning, Lucas seemed a little bit shy, but quickly opened to the audience and gladly shared anecdotes from his life (describing his life before he enrolled in cinema school: “My only relationship with movies was watching TV while eating dinner or going to the theatre for girls”) and honest advice about succeeding in creative enterprises (being persistent and independent). By the end of the talk, he was so engaged in speaking about the Lucas Museum of Narrative Art that he hardly noticed that the time for the lecture ran out.

“The museum will be within a walking distance from the school,” reminded President Massey. He was seemingly happy about the opportunities that the Lucas Museum, planned to be built on Soldier Field in Chicago, would offer for SAIC. The school has a co-op partnership with the leading museums in Chicago, so excited students are already speculating about internship opportunities that might become available after the opening of the museum.

Despite the enthusiasm about the museum, it was disappointing that there was time for only one question asked by students — the audience was generally excluded from asking questions directly. Lucas, to his credit, seemed very eager to answer the inquiry (about the themes that he wishes to include in his collection of narrative art, elaborating on how the museum would merge illustration, cinema, and digital art). Student Government was delegated to ask questions and collected ideas for them through social media. With a promise that they would pick the most interesting ones to ask, the student body was hoping that there would be time for at least a few.

Fortunately, the lecture was greatly enriched by personal insights from George Lucas, which he offered even without specific questions. He is an engaging and open speaker and he offered the facts from his bio in an entertaining, meandering way. For example, instead of listing the titles of his first movies, the audience was expected to have some basic background and figure them out for themselves. He is a great storyteller, which nicely ties into his interest in narrative art.

When asked about what led to his interest in art, George Lucas told the story of the serious car accident he had as a teenager. “I survived against all the odds, so I thought that maybe there’s a reason why I survived.” Since then, his life philosophy was to start every morning with a thought that he has an extra day of lifetime, so he should make use of it. That approach helped to strengthen his persistence in art-making.

During the conversation, Lucas situated himself in the context of an independent artist—in spite of his career in popular culture. He admitted that at the beginning of his film studies he “disdained Hollywood” and was interested in making experimental movies, believing at the time that artistic value was more important than the plot.

When he was in school, he had no hopes or interest in “making a career,” because the big studios controlled Hollywood. He and his peers were simply interested in “making movies.” The situation started to change in 1960s, when entrepreneurs who started their careers 1920s retired and sold the studios to big companies, such as Coca-Cola.

According to Lucas, “It was a new chance” for students to get into Hollywood. Lucas admits that, in regards to educational and professional life-choices: “no matter which route I took, I would be where I am now, making films.”

Lucas nicely situated some breaking moments in his professional life in the context of friendships. He admitted that he took entry exams to University of Southern California School of Cinematic Arts because his friend wanted to have some company while applying there.

Lucas also opened up about his friendship with Francis Ford Coppola. He talked about how they were the youngest employees of the Warner Bros studio, recalling their collaboration on THX 1138 (currently a cult film that was “hated by the studios” back then). He also humorously described how Coppola challenged him to direct his first successful film, American Graffiti.

“He said: ‘I dare you to do comedy.’ I replied: ‘Of course I can do the comedy, I can do anything!’” After the success of The Godfather, Coppola “put his name on the film” to help an emerging Lucas to produce his movie. Lucas called Coppola not only his friend, but also a mentor.  He recounted that he was strong at camera and editing, but Coppola, being better in writing and working with actors, taught him those skills. Their cooperation was a good example of peer mentorship, and it was impressive how much time of the talk Lucas devoted to his old friend.

Seeing how much Francis Coppola “fought every single day” to direct The Godfather the way he imagined, Lucas decided to be independent from the big studios and launched Lucasfilm. For him, independence and persistence were the best ways to create his art how he wanted it. Sharing with the audience the honest advice about the reality of the art business, Lucas drew on art history to state that art has always had patrons. He reminded the students that the sponsors always feel entitled to interfere with artists’ vision, noting, “You have to accept that or be on your own.”

Since the lecture was a part of Conversations on Art and Science event series, a good amount of time was devoted to the role of technology in Lucas’ practice. “You learn that art is technology” stated the director, adding that, “you do not come up with technology first and idea later.” For him technology has always served as means to fulfill his creative vision. “In three first Star Wars movies, I used all technology available to me and always pushed further.”

Lucas pointed out that using technology in art is not unique to contemporary times, and that the history of art has always been connected to scientific progress. He mentioned oil paint in tubes as an invention that allowed impressionists to work en plein air, and pointed out that Brunelleschi would not have built his famous Florentine Cathedral Dome without figuring out sophisticated construction methods. Although Lucas did not speak about history of art in a straightforward way, many digressions about it that he made in the lecture suggested his deep interest in it.

Tying up his reflections on patronage and progress, Lucas stated that, even though critics always tried to determine what’s good and what’s bad, nobody is entitled to judge what is art.

“Art is in the eye of the beholder—if it moves you emotionally, it is art” he concluded. George Lucas’ persistence in art-making, his interdisciplinary practice, awareness of art history, merging community, and collaboration with independence nicely  fit with SAIC’s mission and ideas. The openness of the iconic filmmaker and the enrichment of the speech with many personal remarks was a great experience for the audience. However, the lecture would have benefited from more questions from the SAIC community, which would have established an even stronger connection between Lucas and his listeners. 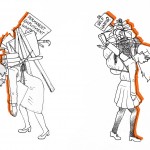