Auguste Renoir’s Chrysanthemums depicts a wild bundle of blossoms wrangled into a vase at the center of a small table. There are two families of chrysanthemums — the nesting poms of white and the opened explosions of yellow-orange — extremely rich in color and painted so fluidly that some of the petals appear transparent. Many people can produce realistic botanical paintings, but a master will infuse them with vibrant personality.

Renoir painted Chrysanthemums in 1881-’82 just after his famous Two Sisters (On the Terrace), during an experimental shift in his practice as he traded the loose, light motion of Impressionism for bolder saturation and tighter composition, and sensual nudes for the more saleable subject matter of portraits and floral still lifes. Chrysanthemums, then, requires musical accompaniment that is equally fluid, bold, and representative of an artist’s transition. Patti Smith’s Fire of Unknown Origin is a fitting complement. 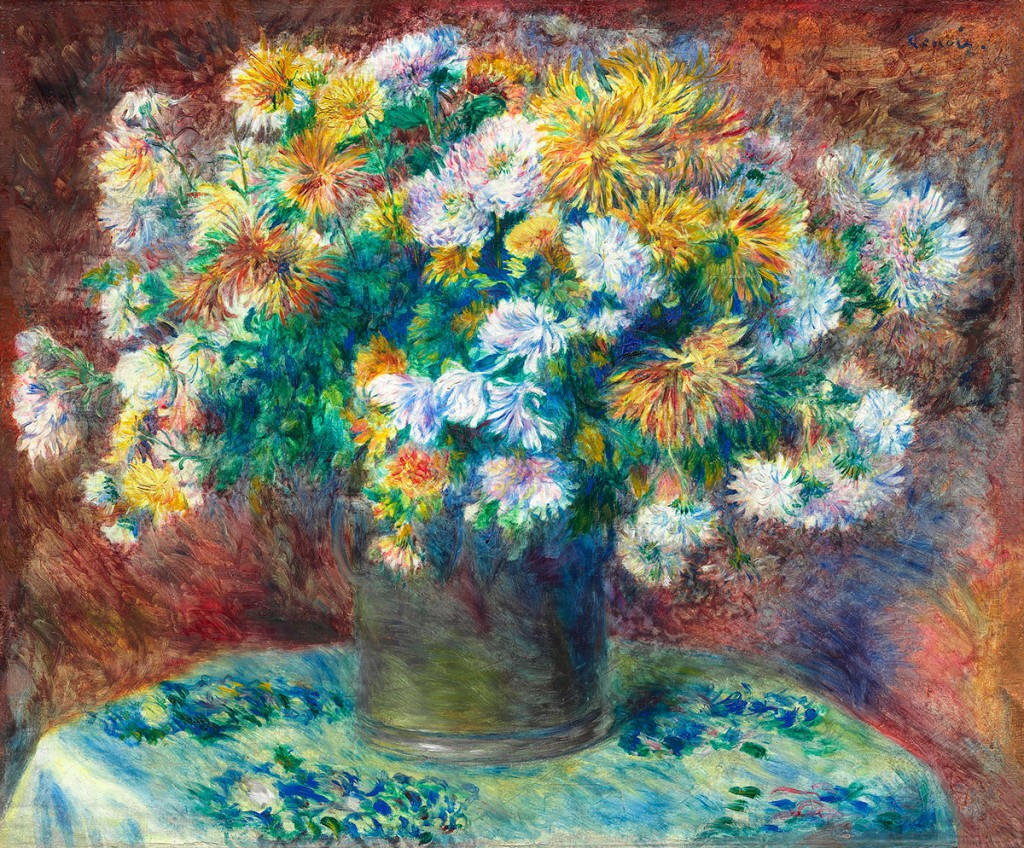 According to Impressionism and Post-Impressionism in the Art Institute of Chicago, Renoir’s “wet-on-wet” technique for painting Chrysanthemums began with a palette knife. He laid a thick, smooth layer of white lead paint to mask the weave of the canvas, followed by thin, intricate layers of wash to achieve effects akin to watercolor.

Fire of Unknown Origin from Wave, is the Patti Smith Group’s most conventional — and possibly least-liked by fans — album and is the last before her nine-year hiatus from recording. The bellowing and mournful ballad seems representational of Smith’s transition from punk headmistress to wife and mother. Fire is known as a transitory substance in many cultures, marking the passage from one state of matter to the next, symbolic either of life trajectories or of the other worlds of death. A Reiki burning bowl ceremony is perhaps the example of this symbolism, wherein a participant writes on a piece of paper first what she would like to let go of in life, then what she wishes to manifest, and then burns the paper so that the smoke may reach the masters of the universe and fulfill her intentions.

Just as Smith adapted a mellower sound before her departure from music, Renoir’s shift to painting flowers was rooted in calmness. Renoir has said that his tonal studies of flowers allowed his brain to rest, as the tension inherently present with a live model became absent.

The painter’s intricate study of values is most impressive in Chrysanthemums’ shadows. Flowers with high petal counts can often seem flat on a canvas, but Renoir’s use of color, rather than black, to denote shadow gives an almost three-dimensional effect to the tightly bound masses. Rich blues and greens give the nucleus of the arrangement both impenetrable depth and reflective lushness. 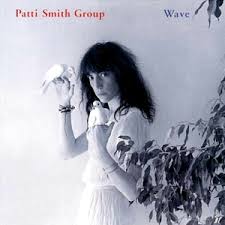 Smith’s vocals in Origin are similarly loose and enveloping. It is extremely difficult to understand the lyrics, as she conveys their meaning more tonally and emotionally, rather than through concrete annunciation. It’s as if she uses her voice to carve out the negative space around each syllable instead of pronouncing the word itself, like Renoir’s shadowy petal treatment. The sound is overwhelmingly full as a result.

The lyrics, beautifully demonstrative of Smith’s poetic prowess, spin a tale of a baby lost in a fire with the heavy personification of death as a tormenting presence in the mother’s life until Death, too leaves, and she is truly alone.

Renoir’s orange blooms invoke small surges of flames, but the chrysanthemum, in many cultures, is also symbolic of death. In Renoir’s France, it is historically almost exclusively used in services of the dead or is laid on graves. The U.S. is the only country where the chrysanthemum is a symbol of hope and optimism. When widening the interpretive aperture of the chrysanthemum loads with the same dichotomy of fire, marking the end of one phase and instilling hope for the next.

The chrysanthemum also happens to be the official flower of Chicago, a sister city of Paris. It is where Smith was born, where fire is historically pertinent, and where Chrysanthemums is housed — leading one to the realization that in the midst of constant transition it’s important to pause and appreciate these points of interception, to stop and smell the Chrysanthemums. 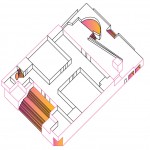 Exit Through The Restaurant 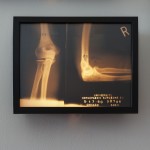