There is one photograph that is larger than the rest in Diary of Elizabeth and James Dixon, 1840–41 / Connecticut Landscapes, 1977–86, James Welling’s exhibition at the Art Institute of Chicago. Near the entrance, it is framed and given its own wall. It is a black-and-white image of a house on a hill with some leafless trees in the background. A car is parked in the double garage attached to the front of the house. The car and the architecture are the only indicators of when the photograph was taken, but wall text tells us that the image is of Welling’s parents’ home in Guilford, Connecticut, some time between
1977-86.

Opposite that wall are 150 beautiful, delicate, small photographs displayed between two rooms. Their subjects alternate between Welling’s great-great-grandmother’s two-volume diary of her honeymoon in Europe beginning in 1840 — one year after the invention of photography — and his parents’ home in the 1970s and ‘80s. Each photograph is cropped and focuses on a particular detail, like a couple sentences in the diary written in a narrow cursive or a windowpane on the side of the country home. Most of these four by five-inch, black and white and sometimes sepia contact prints are presented side-by-side, individually matted in a vitrine. A selection of some of these tiny photographs is independently framed and mounted in two rows on what looks to be the final wall of the exhibit.

The display and framing of the works in this exhibition seem to carry special significance. Why are only some of the images framed? There does not appear to be an obvious shift in subject matter between the photographs in the vitrines and the framed pictures. The decision to present these photographs in two different arrangements has an effect on how we perceive them.

Welling was part of the Pictures Generation, a group of photographers and artists in the 1970s, including Sherrie Levine, Cindy Sherman, and Richard Prince, who experimented with photography’s purposes. The group was interested in the gap between the object and the photograph of the object. Welling’s work highlights this distance, changing the original objects by re-contextualizing them within two family stories. Welling’s work here asks us to question how photography challenges our ways of seeing and remembering.

The display in this exhibition emphasizes the tension in Welling’s photographs between the fragmentation of memories and the overarching line of his family’s history. Horizontal presentation of photographs in the vitrine mimics the experience of reading a book, and a narrative unfolds, each photograph a new page in a larger history Welling is creating. A white matte behind each photograph provides the viewer with a moment to travel through the gaps in time between the images as they alternate between the distant past of Elizabeth Dixon, Welling’s great-great grandmother, and the recent past of Welling’s own life. This layout-type presentation leaves the viewer feeling that the photographs could still be rearanged and that maybe the series is not quite complete.

It is particularly interesting that frames are present at the beginning and end of the exhibit. Frames often have several roles: they highlight a particular moment, finalize a work of art, and they also isolate a moment. By bracketing this series with frames, Richard and Ellen Sandor Curator Matthew Witkovsky creates firm starting and ending points. The long vitrines with unframed photographs in the middle create a space that expresses the indeterminacy of our memories. The unframed images leave ambiguity to memories that might not be as solidly developed. It should also be noted that the images in the catalogue of the show are presented in a different order than they are in exhibition, suggesting the mutability of the fragments of memories that the images represent.

The thread connecting all the photographs is their form. The couples of past and more recent images often present similar shapes. One image of the diary reveals a long rectangular building in France with a long rectangular house in the wilderness in Connecticut beside it. Later on in the series, there is an image of four windows with dark shutters on the side of a white house with an image of the diary, in which we see a white page with dark picture frames drawn onto it, signifying a formal genealogy in the pictures.

It is a nostalgic and thought-provoking exhibition, this collection of memories. Its softly lit pictures filled with trees, antique furniture, elegant shapes, and cursive penmanship invites viewers to question how we can make a record of our own past experiences. Are records reliable? How can we frame them and bridge the gaps between the past and the present? How will these records be seen in the future? 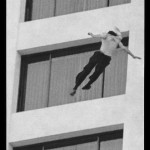