From the window in a building where you work, you see a man pushing a cart full of dollar store children’s toys. You tell your boss you’re leaving for the day and ignore your other obligations, snatching your jacket on your way to follow the cart. As you catch up with it, you notice to your right a towering wrought iron gate you’d never noticed before. You follow the fence, of which the gate is a part, around a corner, where it ends and you see that you’re in a cemetery.

You decide to find the most weathered headstone, a practice that you did out of boredom as a child when your family would visit relatives’ graves. You find the marker of a child who lived to age six, and you can only just make out her name: Nevelka Debeljek. A great uncle on your mother’s side kept a book where he was compiling your family history, and you remember seeing the name Debeljek in it when you were young, so you proceed to a municipal library a bus ride away. You search for the name and find that Nevelka’s parents were on the same steamship your great uncle’s parents took upon emigrating from Zagreb.

This is what members of Situationist International, a Paris-based group of radical avant-garde artists and political theorists in the 1950s, called a “dérive,” or “drift.” They used these unplanned urban journeys to let the contours of the built environment subconsciously direct them with the goal of having an authentic experience.

On February 20 at the School of the Art Institute of Chicago (SAIC), a day-long event built on this concept will begin, rather than end, in the library. Bibliodérive, or “library drift,” is based on the idea, says Graduate Dean Rebecca Duclos, that in the majority of academic settings, there are certain allowable research methods – the interview method, the participant observer method, data analysis, and so on. “We don’t often see synchronicity, chance, intuition, and gut feeling discussed or legitimated.”

Bibliodérive came about through conversations between Duclos and the Library Committee of the school’s Faculty Senate. One of the Library Committee’s aims, says Claire Eike, who directs the school’s Flaxman Library, is to “explore in-depth, creative collaborations between library staff and the SAIC community that support teaching, learning, and research in the many ways they are practiced at the school. We have such diversity of thought, style, methods, and practices in the SAIC community.”

The library, says Duclos, wants to show that libraries don’t have to be “overly purposefully useful.” They can be places where a sort of recreational research can be practiced, as well. “Really profound ideas can come out of that purposeless research that then you can research in the ‘proper’ way.”

The roots of Duclos’ interest in drifting go back ten years. While working toward her PhD, she did an artist residency in Banff, Alberta, Canada, when she experienced a kind of writer’s block while working on her thesis, which was about the Situationist’s practice of dérive. Gathering other residents, she suggested dérive-ing the library in Banff, starting at the wall plaque that described why the library was named after its founder.

Duclos searched the library’s collection for one of the names on the plaque and went to the first book that came up. She took the book next to that and read through some footnotes, following one to a 1963 journal that the library also had. It mentioned a taped interview with Marcel Duchamp which the library also had in its collection. In it, Duchamp talks about his wife Teeny. “I never knew he had a wife,” says Duclos. That led her to a book on Duchamp, in the last section of which she found a description of the Duchamps’ New York apartment two doors away from where Duclos’ grandmother lived.

Three hours later Duclos and the other residents reconvened. “It seemed a number of us had had this strange synchronous feeling,” she says. Her writer’s block soon after lifted. “I somehow needed to be given permission to not search for the end of something.” Later, while teaching in Montreal, Duclos helped organize a city-wide Bibliodérive.

The Library Committee’s goal, says Flaxman librarian Holly Dankert, is to enhance the research experience at the school by creating “a more playful interaction with our books, videos, sound, and archival collections, so that the SAIC community will discover new ways to engage with library collections and enrich their own research and studio practice.” More so than academia’s traditional goal-oriented practices, this kind of research can be “joyful and exploratory and still yield serious results,” says Eike. After all, artists tend to be “experts in the field of curiosity, as well as in profiting from unexpected results.”

Dankert and other museum staff have created “situations” to prompt students and faculty to explore the Flaxman’s collections in less traditional ways, but they have also invited SAIC students, faculty and staff to propose their own situations until February 10 on biblioderive.tumblr.com. Bibliodérive will take place for one day across the SAIC campus, opening any and all resources to drifting, including the school’s Video Data Bank, the Fashion Resource Center, the Joan Flasch Artists’ Book Collection, and more.

Duclos believes art and design schools can be better at recognizing other ways of coming to knowledge. “The more we can own those methods in conjunction with traditional methods, the better off we’ll be as a research society.” Plus, she remarks, “you find some really good stuff when you’re not looking.” 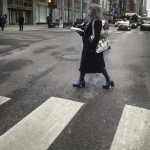