A visit to The New Interfaces in Musical Expression Conference 2014, London, UK

Carving, according to Laban Movement Analysis, is a term that describes the division of 3-dimensional space by the body. As appendages cuts through the air, they define the edges of negative-shapes. This technique of analyzing movement provides a detailed taxonomy for describing the dynamics of the actions of the body. At NIME 2014, the conference for New Interfaces in Musical Expression, discussion of design principles that incorporate movement analysis was essential to most research practices. Dance and music were sometimes explicitly linked, as in the presentation of by McGill Phd Joe Malloch on digital prostheses – extended ribs and spines that react sonically to dancers movements and sometimes more implicit. Everyone has to move to interface with an instrument.

One paper discussed the role of appropriation in human instrument use. In order to explore how style develops through exploiting or subverting the design features of an instrument, the group based at Queen Mary University in London, developed a simple wooden box with pressure sensors and tested how users responded to different sets of limitations. One group could only manipulate timbre; the other could also change pitches. Interestingly, their research found that those musicians with the more limited instruments were more creative in playing techniques, and believed there were even more possibilities in the instrument than they had discovered. Those who had more options thought that they had discovered most of the instruments’ potential.

Dr. Anthony Hornoff, a cognitive modeling specialist, presented on musical techniques with just the movement of an eye. Though technology is improving, he demonstrated how most programs use the “Glint Vector,” literally tracking the glint in your eye from the reflection at the back of the pupil, a process still highly prone to inaccuracy. The jumpy movements of the eye, called saccades, take place in less than 40 milliseconds, resulting in very sudden musical cues.

This year the five-day international conference took place at Goldsmiths University in London and also featured a range of installations and performances, taking advantage of the proximity of the Brunel Electronic and Analogue Music Festival, and London’s expansive experimental sound scene. In a small park across from New Cross Gate, English sound artist Kaffe Mathews presented Pedaling Games, a simpler version of her Ghent Bicycle Opera. Bicycles installed with stereo speakers were available to ride around the park. The soundscape, linked to a GPS tracker would shift in different areas. Music, poetry, pigeons, and traffic created a story of searching in a tiny urban playground of hillocks and games courts and welcome playful respite from the intense technological discussion of the day. 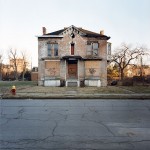 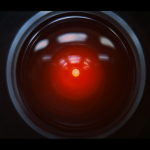