Pope.L invited speakers that were willing to be were clothed in full coverage costumes, mainly mascot costumes that are designed to cover the entire body. 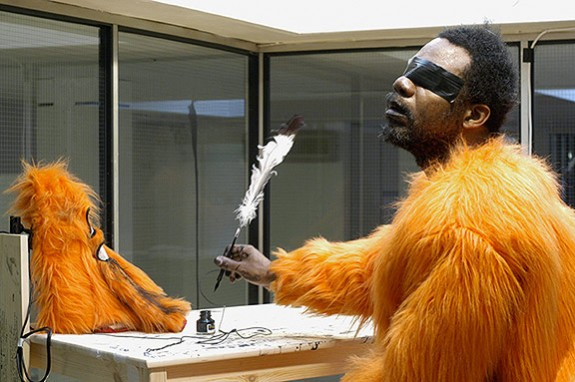 William Pope.L initially questioned whether he should accept the MCA’s invitation to curate a panel on diversity. “I thought, maybe I should not do this because a lot of those panels tend to be not fruitful. People come out thinking they didn’t get what they wanted or they got something they didn’t want, or why did I come here anyway, or who the fuck do these people think they are, and so forth.”

Pope.L has a history of working with people from diverse communities. In the late 1970s he began to create a series of works in New York City, eRacism, that were political actions of contradiction. In Tompkins Square Crawl (1992), he wore a business suit and lay stomach first on the ground, pushing a flower pot through the gutters. In the The Great White Way, 22 Miles, 9 Years, 1 Street, he crawled the entire 22 mile length of Broadway, in segments over several years, dressed in a Superman outfit. The use of costumes in these works serves to highlight the contradictions within the social conditions that we accept on a daily business.

Considering his own history of working with people (and representations of people) from diverse communities in his art, Pope.L proposed to address the concept of a diversity panel, and how it sets a public forum for judgment and misconception. Misjudgments and assumptions often occur because of the separation of the appearance of a person, from who they are inside. This separation of inside from outside, causes a misunderstanding and frustration. Pope.L invited speakers that were willing to be were clothed in full coverage costumes, mainly mascot costumes that are designed to cover the entire body. He says, “I thought it would be interesting to just go with that, to start out that way, start out with the miscommunication, just get there right away.” In an homage to George Orwell’s fable about a power dynamic between the group and the master, Animal Farm, the selection of possible outfits consisted of farm animals.

“I think there’s going to be a discomfort. At first I think it will be funny and then I think it will be something else. I’m not sure what that will be, but I think there will be a difficulty that will come about as the panel goes on. Not having access to the inside, you guess who the person is.” The panel is made of speakers who are interested in speaking about diversity and interactions within social groups. Artist Zachary Cahill explores the role art plays within institutions through lectures. Director of the University of Illinois School of Art and Art History, Lisa Yun Lee is an active writer and speaker on fostering radically democratic practices. Associate Professor in Visual and Critical Studies and Liberal Arts at SAIC  Romi Crawford, Ph.D., researches the aesthetics of race and gender identity as portrayed in American popular culture, film, and visual arts. Wolfie Rawk, SAIC Fibers and Materials alum 2013 currently instructs a class in the Photography department at SAIC about institutional and interpersonal systems of oppression, “Minoritized Making: Art/Artist in Socio-Political Contexts.”

Pope.L says, “I tried to pick people who I think really want to talk about diversity and not the standard version.” For instance, he wants to talk about how black people have been devalued. “At the same time, I could go up there and do that and we’d all go and go, ok, I’ve done my diversity bit. So it’s some kind of weird game or ritual, where you take a member of the group that is disenfranchised, you get them to speak to the pain of that group. We listen for whatever time we listen and then we congratulate ourselves that we’ve done so. And then that’s it. Part of the problem of doing these panels is, what do they do?”

Instead of planning a panel with a set of objectives and a planned outcomes, Pope.L based the talk around a set of questions that have been difficult to comfortabley answer. “A lot of what is called diversity, somehow, is technically pitting one group against another,” he reflects. “There’s this thing, when one group asks for its rights, it is automatically implied is that it’s asking it at a loss to other groups. That’s a real interesting question.” For example, he cites the white patriarchy pitting poor whites against enslaved and free blacks in the late 19th century, how black feminism did not see itself reflected in white feminism in the 1980s, and how many people misunderstood affirmative action like it was just “for black people, like diversity equals black people.” The conflation arises from either putting many things into one basket or pitting people against each other in order to be heard.

Pope.L says that the condition of feeling unable to be understood and unable to communicate is a regular existential issue. “People all the time feel that they’re stuck inside of themselves and this is a general feeling. I think it happens a lot when you’re trying to communicate something and you can’t, and you would like someone to be inside your head so they can see what you do. You put it within a social context having to do with how a person looks or behaves and they get sort of crated together. It’s a standard problem that my outside is one thing and my inside may be another. In a country that I think believes in facts, there’s a problem. There’s some truth to my outside, but I think some people who are being misread would say that there’s probably even more truth to my inside. I think that’s a real human issue regardless of what group you’re talking about. Despite assertions of identity by other means, people are often judged by how they appear, rather than how they are.”

The panel, which happened on 17 April 2014, included the awkwardness and uncomfortable atmosphere that he anticipated. The inside and the outside were structured borders, amplified by the technology of costume. The breakdown of borders occurred after the audience began questioning the panelists, engaging in social interaction with a giant cow, rat, and chicken.

“People try to make these containers in a way, families, love relationships, villages, and it’s always this thing of dealing with people in a full contradiction of the spirit and the flesh and sometimes they don’t go together in a comfortable way.” Pope.L asserts that this unmooring of trust and understanding is fundamentally difficult and awkward. By creating a situation of suspended representational identity within an institutional diversity panel, he sets up a platform for a community to imagine identity, and view themselves imagining, assuming, and becoming frustrated. 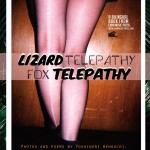 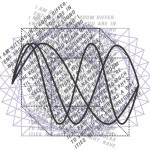