Open Studio Night, the annual event where MFA candidates open their studios to the school and to the public, is a chance for students across all departments and disciplines to see just exactly what their colleagues are working on behind closed doors. Students in the MA in New Arts Journalism Program were on the scene to explore and introduce a handful of SAIC’s community of artists. 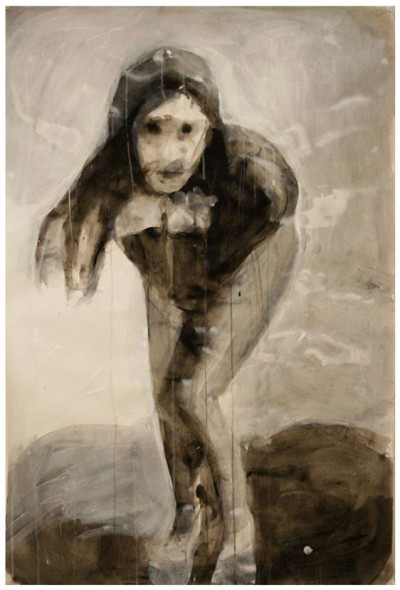 A painting by Orikdeh Torabi. Image courtesy of the artist.

SAIC’s Open Studio Night, the one time each year where MFA candidates open their studios to the school and to the public, is a chance for students across all departments and disciplines to see just exactly what their colleagues are working on behind closed doors. Seven students from the MA in New Arts Journalism Program were on the scene on November 11th to explore and introduce FNewsmagazine readers to a handful of SAIC’s community of artists.

Brian Grimson’s use of ephemeral substances demonstrates the idea of the “old and forgotten” in his captivating collage-like abstract paintings. The first year in Painting and Drawing uses the combination of old newspapers, fashion magazines, and other found objects to illustrate the coming and going of both physical substance and popular culture. His piece “Blind Spot” is rich with texture, and shows depth and complexities on multiple levels.

In one of Orkideh Torabi‘s paintings, a monochrome, faceless girl with two black circles for eyes holds a small doll. This hauntingly beautiful piece from the post-bac student in the Painting department exemplifies the ominous, and thought provoking subjects in each of her paintings. It’s hard to avert your eyes to anything else, even if you wanted to. Walking into her studio, a small sign reads, “Do you remember that you are not yourself anymore?” This statement accurately reflects the dark and voyeuristic feelings one has while viewing her works. 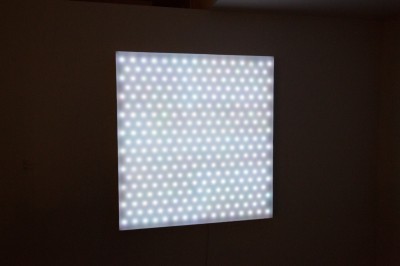 Tobias Zehntner, a first year in Art and Technology Studies, is a Swiss/Danish artist who came to SAIC to explore the wonder that emerges from the intersections of science and art. His latest work, an untitled room installation that he brought out of his studio and into the 12th floor MacLean crit space, utilizes a honeycomb-like network of blinking LEDs behind a fabric panel to create waves of rising and falling light rhythms. Taken at first glance the dancing lights are chaotic, but as seen softly mirrored on a reflective panel across the room, the effect is satisfyingly calming; ephemeral light becomes condensed onto a tangible surface. 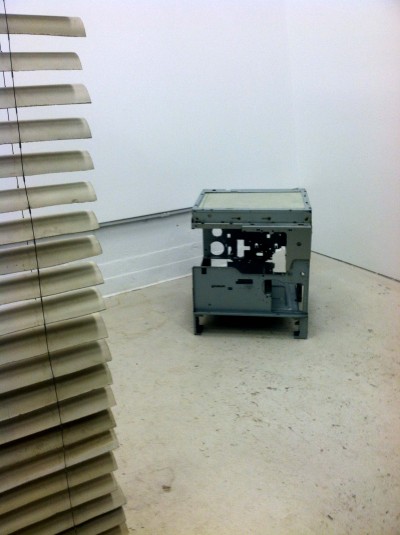 Second year Sculpture student  Yunyu Shih’s examination of everyday office objects results in concrete-casted counterparts. Oversized concrete blinds that hang from the studio ceiling satirize the object’s privacy function, while a Xerox machine becomes a nonfunctional gray concrete block. The coolest part of his work is his uncommon approach to mold making: rather than taking a mold of a single blind to recreate a set of blinds, he uses a pipe to mimic the shape, which draws new parallels between unrelated objects. 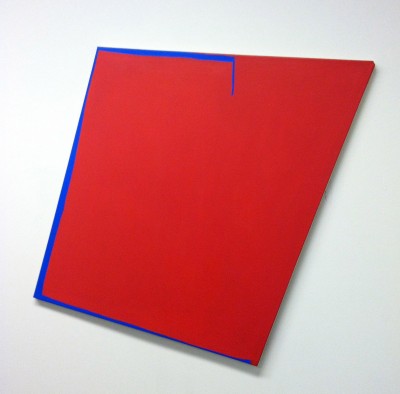 A painting by Spencer Carmona. Photography by Jen Mosier.

Calling Mark Rothko. Are you there? First year Painting and Drawing student Spencer Carmona is channeling your innate way to make a two-color study look stunning. Carmona’s addition of a slim fragmentary royal blue border, delicately frames the red parallelogram-shaped canvas. A neighboring turquoise painting has a similar three-sided border, but in lavender. His cohesive body of work is meditative and summons inspiration from Rothko’s Color Field paintings. 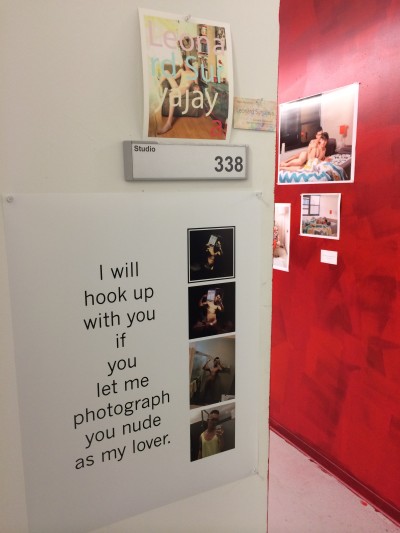 The entrance to Leonard Suryajaya’s studio. Photograph by Vasia Rigou.

“I will hook up with you if you let me photograph you nude as my lover,” posts first year Photography student Leonard Suryajaya in an online ad, explaining, “I wanted to fuck. I wanted to photograph. I would be open for a romantic relationship.” The red walls of SAIC Studio 338 are full of some-would-call-pornographic photos of a queer male as he is exploring issues of intimacy, love, sex, privacy and ethics with people he met on adult social websites. Inviting the audience in and making them take a long, hard look of naked bodies and souls exposed, he’s hoping to deconstruct the notion of sexuality in the digital era we are living through. 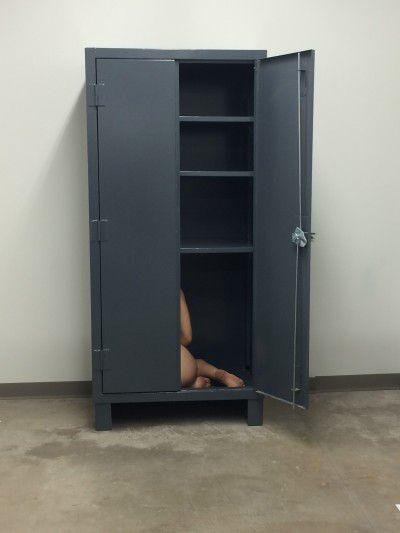 Michal Samama, performance artist and choreographer and a first year in the Performance department, uses her body as a canvas, exploring the space it occupies as well as natural bodily functions such as breathing. In “Move like a body,” she gives the audience the opportunity to observe the slow-motion movement of her naked body within the confines of a metal locker, Looking becomes a different experience, through “harmonized choreography”, as Samama calls it. As she gives sound to her breath through a whistle in her mouth, the work challenges the way the feminine body is looked at.

Edmund Mooney‘s project “Empty Nest” began in his apartment. Inspired by his environment, he collected footage of lights and shadows from outside his window dancing on the wooden ﬂoor. Although the video displayed in his studio is an incomplete representation of the work — due to the constraints of the studio space — Mooney hopes to better highlight the visual element of his work by coupling the ﬁne movements and slight repetition of leaves blowing around outside his window with audio recorded from outside.” Having begun working on this piece at the start of the term, Mooney, who is a first year in Sound, hopes to continue experimenting with the sound until it appropriately reﬂects the desired mood. 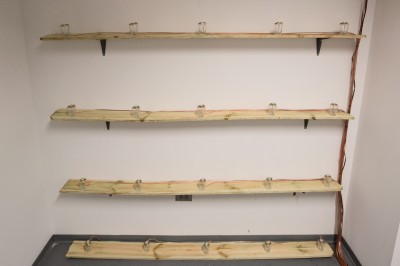 A tiny sample of a click from a wood block ampliﬁed within shot glasses resonates around sound artist Austen Brown‘s studio. A heavy inﬂuence on the untitled project is Michel de Certeau’s essay “Walking in the City” in which the placement of people within a system, like a city, and the process of that system become redeﬁned naturally by its inhabitants. Despite the limiting conditions and hurried nature of open studio night, Brown, who is a second year in Sound, is hopeful about the end product. “I’ve been planning the piece since September… I got the whole thing up this past Thursday, which allowed me only a full day of programming for open studio,” said Brown. The ﬁnal curation of the work will be spaced out horizontally, instead of the vertical display seen in the studio. Standing in the middle of the ﬁnished installation might evoke the surreal feeling of looking down on a system from the outside. He is also planning for a wider separation of the sound objects to allow for improved distinction of the source of the sound. 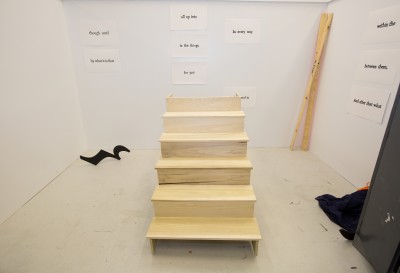 In Danny Floyd’s studio, one finds words on paper, words on wood, and a staircase to nowhere. Though this year’s open studios revealed many artists working haphazardly with text-as-art, Floyd’s pieces reveal meticulous decisions regarding language. He says that he is directly dealing with “moments in between spaces and gaps in language.” The text on the walls and wood are actually prepositions—words that indicate spatial, temporal, or logistical relationships. Like Marc Augé’s theory of Nonplace, the staircase produces a physical space that exists purely for its in-between-ness. Floyd’s work is precise, clever, and investigative, and I’ll be curious to see how it will play out in other spaces. 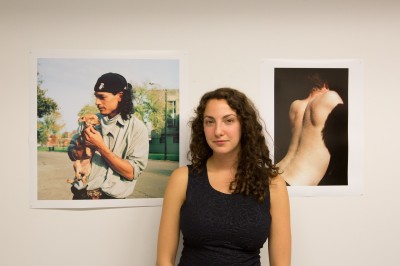 Carly Ries in her studio. Photograph by Ben Macri.

“There is great difficulty in thinking about pictures, even portraits by great artists, as art and not thinking about them primarily as something else, the person represented,” writes Author Richard Brilliant in his book “Portraiture.” Indeed, first year Photography student Carly Ries’ portraits inspire an interest in the subject, but only as an object of beauty. The author of these images presents figures from our everyday lives, of people on the street, in a manner ignorant of their stories, but hyper aware of the lines on their bodies carved by those stories. Other photographs in her studio, though without a face not technically portraits, still somehow evoke personhood with subjects’ individual forms allowing for photographic explorations of the body to work without boundaries. 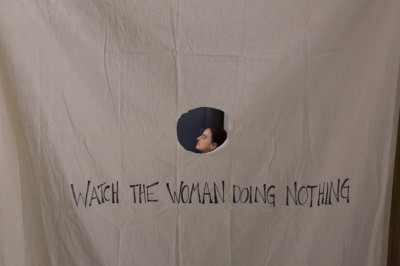 The instruction is to “Watch the Woman Doing Nothing.” Performance MFA Katie Wall sat reclined in a chair with her back against a cabinet and her feet up, facing the rear wall of her studio, the entrance to which was covered by a hanging sheet with a four-inch hole cut at eye level. What we often do when we watch real human bodies other than ours, whether on the street, at the theater or at the mall, is make assumptions about people based on the meaning we ascribe to their actions. This is our nature, to try to understand the other in order to become unafraid. Depriving us of the information we need for that understanding is the most terrifying performance. 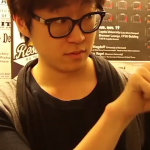 How Do Foreign Students Spend Thanksgiving?