Artists in Chicago and India Consider the Possibilities of Urban Architecture

Artists in Chicago and India Consider the Possibilities of Urban Agriculture

Diners sit at wooden tables amongst vermiculture beds inside the old truck depot where the Iron Street Farm keeps its mushrooms and fish. Inside the surrounding crates, worms create new nutritious soil from waste collected from farming sites across South Chicago. Before the meal begins, the group steps outside to a plot of land behind the hoop houses to participate in a Native American ritual which recognizes the moment of our shared meal by throwing tobacco leaves into a fire. The ashes are composed of previous fires held around the country at meals that celebrate the diversity of knowledge that many cultures around the world employ to create sustainable food cultures.

This is the headquarters of the Chicago branch of Growing Power, a network of farms that support community education, nutrition and enterprise through the cultivation of local produce in a program of urban agriculture. The farm borders the banks of the South Fork of the Chicago River, commonly known as Bubbly Creek. This nickname describes the gasses released from the riverbed due to the decomposition of animal parts thrown into the water during Chicago’s early 20th century boom in the meatpacking industry. On this Saturday evening, artists, chefs and farmers are dining together as part of the Rooting: Regional Networks, Global Concerns Symposium, a program which brings together sustainable food communities and artists to consider the agricultural issues facing dense urban populations and imagine new legacies. 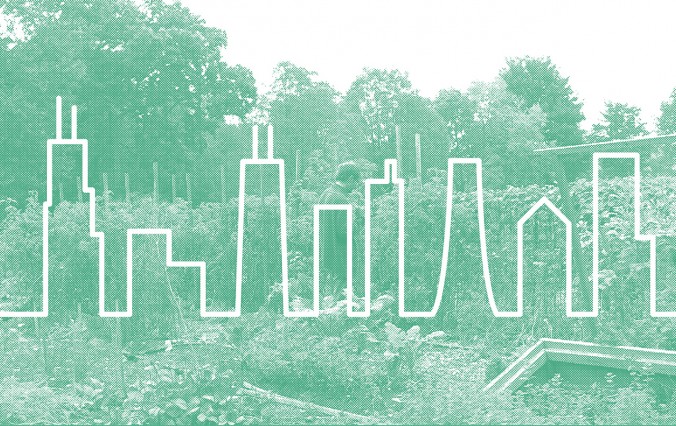 Rooting, which also exhibited works by 12 artists in the Sullivan Galleries, is organized by the Rhizome Alliance, a group of artists and activists from Chicago and Delhi. This group is funded by the Shapiro foundation’s Eager Grant, and seeks to forge bonds between the two cities, specifically around the issues of changing agricultural practices. The idea for the project blossomed when SAIC faculty member Deborah Boardman met artist Akshay Raj Singh Rathore while on a residency at Sanskriti in Delhi.

Rathore, who comes from a family of farmers, is currently pursuing a project which would reintroduce heritage seeds — strains of plants handed down by generations of farmers not grown by large-scale commercial agriculture — within India. He emphasized that in India, “food is not just food; it becomes a huge cultural reference. It involves issues from eating, cooking, to growing, to what to do after the waste.”

While the use of advanced technologies in food production and the industrial distribution of seeds may seem obscure to uninformed people, they affect almost every aspect of everyday food consumption. Rathore says that artists can forge bonds beyond cultural boundaries which can reclaim ground for traditional farming methods in the face of the assumption that modern techniques are always best. Through the public works at the heart of Rooting, Rathore hopes to bring insight and clarity to such questions as “What are we eating and what are the conditions of the people who are growing these foods? Do we need development? What is development?”

The symposium is creating pockets where those conversations can happen. Tour buses, where artists, chefs and farmers interact, visited different farms and cultural centers on Chicago’s South Side to collaboratively prepare food and collectively consume it. In describing the roles that she strives to create through the alliances at the symposium Boardman affirmed, “Artists can provide the space to imagine other possibilities to feel some hope and optimism that alternatives have begun to exist and have existed in the past.” For her it was crucial to acknowledge “that there are things from tradition that can help us move forward and that there are some exciting activists and entrepreneurs that can move us forward.”

On the foraging tour that took place as part of the symposium weekend, writer and seed grower Michael Swierz discussed the facets of wild and cultivated foods. He taught attendees about recognizing the characteristics of plants, such as the neurotoxicity of nightshades and the digestive assistance of mints and how to recognize plant families by leaf and flower shape. Participants learnt how to start to discern safe wild plants to eat, like the apple family haw berries of the Hawthorne tree and the Burdock tuber. He told the group that puffball mushrooms were safe when young, but recounted a conversation with a mycologist who told him about unfortunate teenagers who decided to snort the dry black spores, which promptly ate their brains. Plants often have distinct phases of conserving and energy and releasing that energy into seed in a natural cycle. Swierz runs gardens in Chicago that are not to grow food, but instead allow plants to begin seeding in order to create a local seed bank.

Where the post-industrial flatlands offer the space for a high number of urban farming initiatives in Chicago, Delhi’s rapidly growing population, which is fueled by rural to urban immigration, faces a host of different challenges in developing urban farming practices. The next phase of Rooting will take place as an exchange between the two cities. Khoj, a space in Delhi dedicated to artwork centered on ecology and food since its foundation in 1997, will host a residency program. Rathore is also working with Chicago artists Lia Rousset and Amber Ginsburg to exchange cloves of garlic between the cities, while keeping records of this transmission on a shared blog. The artists decided to use garlic as the representative seed of exchange because of the plant’s global popularity and the etymology of the word “Chicago” which is derived from the Miami-Illinois Native American word for wild onion or garlic. The Delhi bulb will be planted on the roof of Chicago’s 6018 North, and the Chicago bulb will find a home on multiple rooftops in Delhi. Rathore stated, “We are giving people a garlic bulb and asking them to grow it and monitor it for ten months, as long as the plants’ growth and seed cycle takes.”

One Response to Planting an Agricultural Urbanism