The murder of an artist spurred the Greek government to arrests 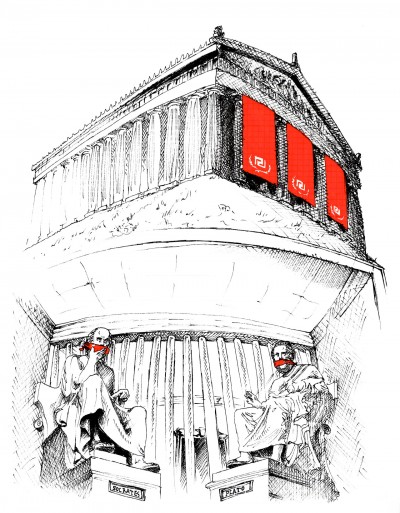 Multiethnic nightmares along with racial discrimination, xenophobia, fascism, nepotism and ultra-nationalism are only a few of the evils that came out Pandora’s box in Greece after the power of art cracked it open. Pavlos Fyssas’ words and activist efforts were so powerfully affecting against neo-fascism, that he was stalked and murdered. Yet, the beginning of the end for the Golden Dawn started on September 17th in the streets of Athens when the anti-fascist rapper was stabbed to death by a member of the Greek far-right party by day, terrorist organisation by night.

Feeding upon the economic crisis and the desperation of the people, Golden Dawn, grew in opinion polls and influence. With extremist views incorporated into political discourse, its reign of terror spread.  The neo-nationalist party was founded in the 1980s and ever since Nikolaos Michaloliakos has been touting his party’s neo-nationalist viewpoints in satellite political offices in Melbourne, New York City, and other global metropolises. The party entered Hellenic Parliament after the last elections in 2012 with 21 seats, shortly reduced to 18 in a revote in June.

Police affiliated with the party thrived over the inefficiency of those in power, rising unemployment, and the corruption and devastation of people searching for an outlet for their anger following the economic collapse and austerity measures.  This was an accepted status quo until Pavlos Fyssas was killed by a Golden Dawn member that  worked in the cafeteria of the party’s office, after being ambushed by more than twenty armed people while police stood by failing to intervene. Even the Prime Minister Antonis Samaras condemned the Golden Dawn after the murder of Fyssas, describing them in his speech reacting to the event, as “descendants of the Nazis [here] to poison our social life, to commit crimes, to terrorize and to subvert the foundations of the country that gave birth to Democracy!”

The international hacker group Anonymous accuse Golden Dawn MPs of masquerading their criminal organization as an anti-establishment political party. Anonymous, one of the most influential groups of mobilizing activists in the world, is an online and offline community that exists as an anarchic, yet global resistance front.  The group posted a video on the internet calling Greeks “to arms” on the 26th of October to honor the memory of the left-wing artist and activist that changed the political scene with his own blood.

Fyssas’ death acted as a catalyst  to unite Greeks around the world against a political conflict that has escalated out of control. Unfortunate as it may be that cold-blooded murder was the excuse, this death was a wake up call to the country and the world as to the severity of the social problems. More than 20 people associated with the party were arrested on the 29th of September, including Nikos Michaloliakos and his deputy, Christos Pappas, party spokesman Ilias Kasidiaris, the press officer Ilias Panagiotaros and Ioannis Lagos. Members of the Golden Dawn were accused of belonging to a criminal organization, in an attempt by the Greek government to condemn the terrorism and unconstitutional activities that they wreaked. The party has now threatened to pull all of its MPs out of the Greek parliament in a move that could threaten the stability of the coalition government and would lead to destabilizing elections.

Many incidents over the past few years have incited Greek activists to unite against fascism.  The 15 year-old Alex Grigoropoulos who was shot by police in the 2008 Greek protests, the immigrants stabbed by Golden Dawn affiliates in Crete in the Summer of 2013, and the hate-crime shooting of 28 immigrant strawberry pickers in a farm in the small town of Manolada in April 2013, are only some of the incidents that united Greek people in rallies and antifascist protests. Fyssas’ assassination has made a huge impact around the world, and now the Greek government has actually taken direct action against the pervasive influence of Golden Dawn. Fyssas will be remembered as the man who used to help the homeless on extreme weather conditions on cold winter nights, the man who wasn’t afraid to stand up for his art and his rights and the man who shaped the Greek political arena even if it took his life away. “I won’t cry, I won’t fear” he used to sing, in a rap version of a Giannis Aggelakas’ song, known from the legendary Greek rock band, Tripes. His deliberate assassination spoke loud to the hearts of Greeks, and the many non-Greeks, and immigrants that live in the country. Inspiring those who are left behind, one can only hope that he will be the last of the many victims of the new-era Greek fascists.