Out of the Lab and Into the Gallery

Artist Jessica Lloyd-Jones reassesses the boundaries between art and science. 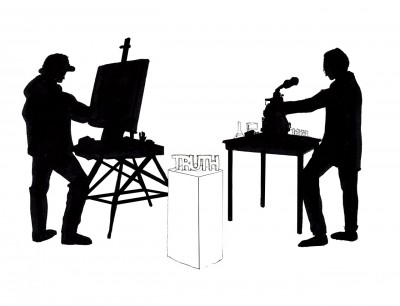 Jessica Lloyd-Jones studies electrical flow in living organisms. She magnifies the stones used to build castles to observe the network of microscopic organisms living within them. With an artistic vision, she draws out physical poetry from what her scientific mind observes.  Lloyd-Jones’ sculptures and installations use science and technology, manipulating materials and light to reveal new physical perspectives.

In blurring the lines between art and science, Lloyd-Jones creates vantage points for concepts that explore innovations in both fields. This perspective encourages dialogue from people from diverse backgrounds, catalyzing new ideas and approaches toward both scientific discovery and artistic media. As an expansion of the conversation surrounding prominent issues like space exploration and technology’s role in works of art, Lloyd-Jones’ practice suggests more interdisciplinary modes of creation that could succeed at inspiring people to participate in these essential conversations that evaluate the scientific foundations of our society and the directions it moves in.

In her “Anatomical Neon” series, Jones explores the movement of gaseous elements and the presence of natural electrical activity in the human body through blown glass objects in the shapes of the brain, lungs, optic nerve and heart. Electrical currents in the form of xenon plasma radiate through the glass in vibrant illuminated color. The organs are easily recognizable to viewers, but their translucency allows them to be viewed on a different scale, drawing attention to the
fact that energy travels through our bodies, like it does the machines that surround us.

The architecture of built objects as well as biological ones serves as a foundation to many of Lloyd-Jones’ works. In “Heaven to Earth” she and composer Ant Dickinson explore the hidden life of the stone used to build Conwy Castle in Wales. Projected onto the castle’s walls are views of the castle from outer space, microorganisms within the stone, and intensely magnified images of the plant life on its grounds. Projecting views  of the tiny insects that thrive within the stone exposes viewers to numerous perceptions of the castle’s context and to the multiple worlds of smaller scales that are so often overlooked. The brightly colored, organic shapes of microorganisms tower over each stone, making the castle itself seem small compared to the magnified creatures that crawl across it in the form of light. “Heaven to Earth” reveals the scientific complexity behind a simple object like a stone, which is often seen as merely a building component.

Art that explores science takes it out of the context of a laboratory or textbook and into a public space designed for interpretation, offering the possibility of a broad critique. People without degrees in science need not feel like scientific concepts are so foreign and daunting that it is easier to disregard them than to consider their impact. After all, the role of science, conceptually and practically, does not just apply to scientists. It is a crucial aspect of our everyday lives and environments.

To many, the subjects of art and science exist as two entirely different fields. Stereotypical images of the starving artist in a studio and the scientist laboring away in a laboratory are common at the mention of either occupation. These practices weave together easier than an outsider might think. In his book, “This is Your Brain on Music,” Daniel J. Levitin explores the relationship between the artist and the scientist, uncovering a surprising amount of likenesses, from “similar stages of development” to the idea that “the work of artists and scientists is ultimately the pursuit of truth.” As Levitin also points out, “members of both camps understand that truth in its very nature is contextual and changeable, dependent on point of view,” and “today’s truths become tomorrow’s disproven hypotheses or forgotten objects d’art.”

An artist’s role in bringing science to a public sphere is to spark the same curiosity in audiences that the artist felt while creating the work. This reaction increases the possibility of building an awareness of the universe around us. Artists like Lloyd-Jones simply encourage us to marvel at our own reality. Her work cultivates a happy medium between art and science by using light, sound and video to make science accessible and engaging to the public. The concepts that Jones explores may go unnoticed in our everyday lives, but her way of bringing these concepts into a visual format makes science less foreign and more a part of human existence.