An interview with Shamim M. Momin, curator of IN/SITU at this year’s EXPO Chicago. 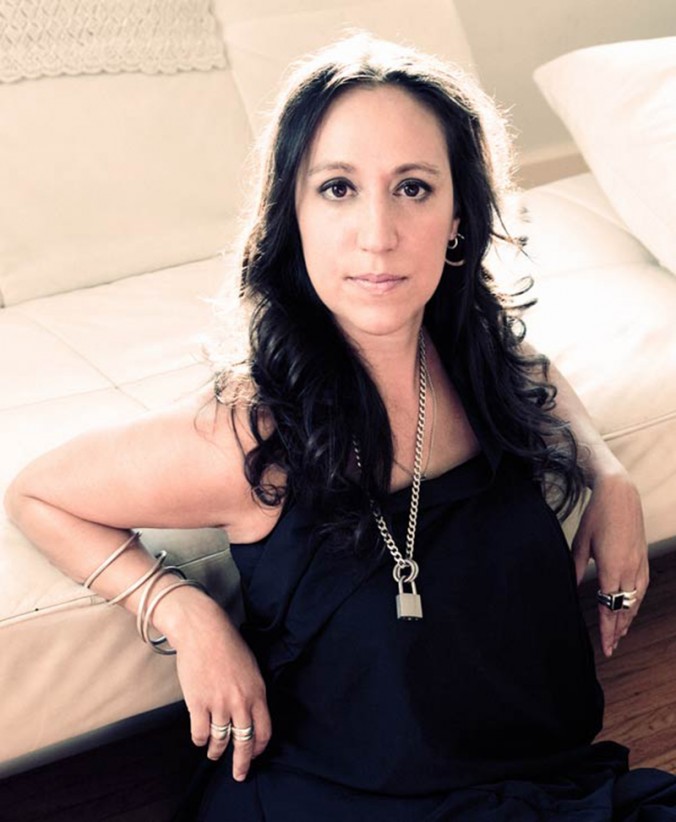 In its second year, EXPO Chicago enlisted the vision of curator Shamim M. Momin for IN/SITU — the fair’s portion of large-scale, site-specific installations — showcasing the work of internationally recognized contemporary artists. Titled and themed “Levity/Gravity,” these works could be seen hanging above one’s head from ceiling beams, inflated on the floor or mounted in the most unsuspecting corners of the venue at Navy Pier.

The former Whitney curator was able to sneak away to give F Newsmagazine a preview of what she has in store for the art community of Chicago and speak about her public art organization, LAND (Los Angeles Nomadic Division).

Lauren Fulton: When you first visited the Pier, what was it that struck you most about the site?

Shamim M. Momin: Well, one of the great things was that when Tony [Karman, President and Director of EXPO] and Nicole [Berry, Deputy Director] first brought me to the Pier, there was no other event happening. It was actually empty, and all the built structure that you see now was not there. It reminded me of the Park Avenue Armory that the 2008 Biennial used and is a similar kind of space.

That informed a lot of the way I was thinking about the projects I wanted to include. I was thinking of how I could interact with the architecture itself and use not the standard booth space, but how you walk through, where you walk through and the peripheral areas around it. I believe it would have been different if I had seen it how it is now.

LF: How did you decide on the title “Levity/Gravity,” and how does this concept apply to the works as a whole?

SMM: Sometimes I choose a theme or a title beforehand and ask the artists to respond to it, like with LAND’s exhibition in Marfa, “Nothing Beside Remains.” In this case, I started by talking to artists who I thought would be interesting in the space, and hearing what they wanted to do based on what I thought was interesting about the site. Then with others, I selected pieces I thought would work with the space. The title came last, but it became clear as I started to assemble a list of artists, as well as the projects specifically, that there was this interesting play with that initial impression of extreme verticality and how people would interact with that in a spatial way. The levity/gravity dichotomy was about what had already come together and was a nice way to categorize it. It’s not the only thing happening in the artists’ work, but as with any thematic, it’s just one aspect — one way of reading the work that links them together.

LF: How did you select the artists?

SMM: It doesn’t always go the same way every time. Sometimes it’s very clear, and I know who I want to work with in a certain space. Sometimes it’s the opportunity, the space, the context. Names and ideas pop into my head, and I begin to make lists. More often than not there are a few centered things or people who stand out — not because I consider their work more important but because I see it more strongly in stages of curating the show. There is usually a core list, and it kind of builds over the course of it, and new ideas come up and more works are considered.

LF: Of the 11 artists, how many created pieces specifically for IN/SITU?

SMM: Most of them. Karl Haendel’s is probably the most site-specific in that every ampersand was created for the space it’s in. There are a few that we can work with in variable spaces, but by and large he did it directly in conversation with the dimensions and architecture. Glenn Kaino’s golden footbridge is an idea that he has had but we’re realizing it here, so I consider that a commission. Sanford Biggers came up with the cotton and feather cloud sculpture specifically for the fair. Jose Dávila’s “The contraction between space and time. Time is but a stream I go a-fishing in” — the red balloon anchored to the ground by the heavy stone — is particularly related to the fair and the fair time frame because it’s a process piece, as it deflates.

The ones that were selections are Kevin Appel’s work from his Salton Sea series, Shinique Smith’s four fabric bundled sculptures that will be hanging from the ceiling, Diana Al-Hadid’s bronze bust pieces and Michael Rakowitz’s work. Michael’s inflatable rendering of the failed Pruitt-Igoe complex in St. Louis is one that in this case I consider site-specific, but it preexisted. We also have Alec Soth’s installation “XGF,” which is made up of 65 found photographs of women and presents a portrait of female objectification. There is also Dan Gunn’s wooden screens that play against the light and shadow in the space. Also Andreas Lolis’ installation of discarded packing material and boxes. 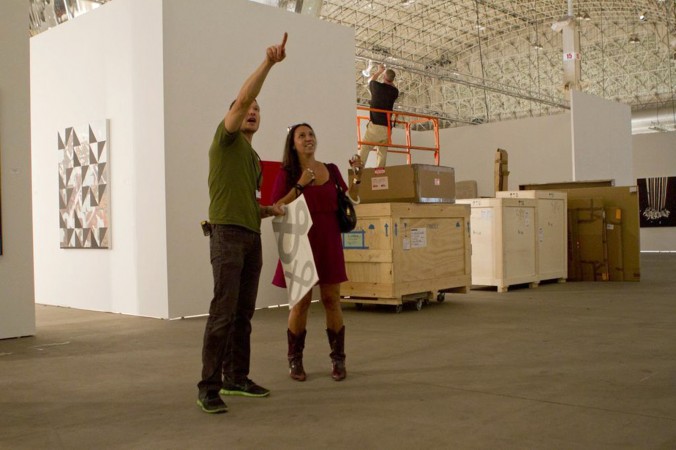 LF: You mentioned that these works are to be “encountered.” How does their installation present them in such a way?

SMM: Yes, [they are meant] to be experienced in the public area or a non-booth space. A space that is not specifically defined by a particular gallery, what that gallery represents, or is selling. In the peripheral places where you are not paying attention as much — the hallways you walk through or the “blank space.” I mean there’s really nowhere in a fair that is a blank space, but if you were to divide it that way, there are things that don’t belong to any one place except for the overall fair.

There is a very developmental and evolutionary aspect to it that I like. It’s hard to not assume that everything belongs to some booth, but as you are walking through, I think it will make itself specific. It’s an experiential aspect that is in some ways hardest to achieve at a fair, but it is important to me from a personal curatorial standpoint and it is also very much about what LAND does. Also for those who don’t know about LAND, this is a nice way for them to be introduced to some aspects of what we do.

LF: What is up next for LAND? Will you talk about your cross-country billboard project a bit?

SMM: It’s a concept that was initiated by the artist Zoe Crosher, an LA-based artist, who came to me about doing a multi-artist billboard project along Route 10. Originally she was envisioning it mostly in the desert from Arizona to LA. She was referring to it as “The Manifest Destiny Billboard Project,” as a little bit tongue-in-cheek. Obviously the idea is to investigate — to think about the complex and problematic history of the term and its implications. As we kept talking, it seemed more interesting as a way to engage the full country. Route 10 is exciting because it’s not the standard cross-country route, but it’s a really critical one in a lot of historical ways, along the south in particular. I proposed that we curate it together and expand the list of artists for the entire country. It starts east and moves west, and every artist involved is dealing with the theme in their own way, in some cases more directly than others.

I’m calling each iteration a “chapter” just as a way for people to understand that they are linked over the course of time, but it’s not one after the other like chapters would be laid out. It’s not a single story to be told, but it unfolds in a consecutive manner. Each artist can add what we are calling “activations” to their chapter, and we will work with organizations in those areas as much as possible. We always want to work with people who love their cities and want to work with what is particular to their area. The civic pride of Chicago is a great example of that.