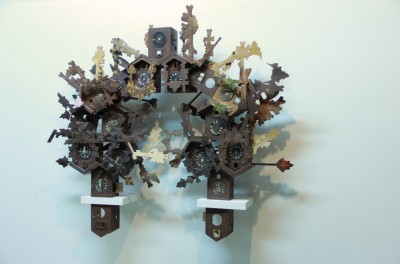 Friday, Sept. 6th marked the infamous fall gallery openings in Chicago. Kasia Kay Art Projects, off North Aberdeen Street, opened with the concept child of the artists Duncan R. Anderson and Daniel Bruttig. The title’s aim, Wisconessee, unique albeit familiar, luckily doesn’t involve a celebrity union like Tomkat or Brangelina.  Instead, it embraces the influential and diverse roots of Anderson, a Tennessee native, and Bruttig, from wooded Wisconsin.

The juxtaposition of sculpture and mounted illustrations is ambiguous and intimate, blurring the personal identities of the artists involved.  There are no custom-cut vinyl labels or artist-identifying print cards. The walls are clustered with fervent, prismatic drawings wreathed in ornate and minimal frames and accompanied by one or two intricate sculptures. Bruttig and Anderson mutually display and neither claim their work in Wisconessee, denoting a symbiotic relationship of “what’s mine is yours.”  This unitary experience of art coupling could very well become the new gallery trend.

Anderson’s “Bears with Clubs” is a vibrant sketch of two reluctant bears about to brawl over an anthropomorphic countryside and a glimpse into a visionary chaos. Its quick, dramatic strokes of pen on beige soiled paper creates a sense of petrified anticipation. Bruttig’s wooden sculpture, “Alter,” summons thoughts of an old cabin in the farmlands and plains of the Midwest. The conglomerate clocks and togs of “Alter” lurch toward the viewer, appearing to tick and teeter; upon closer inspection the small, wooden pieces are silent and motionless. 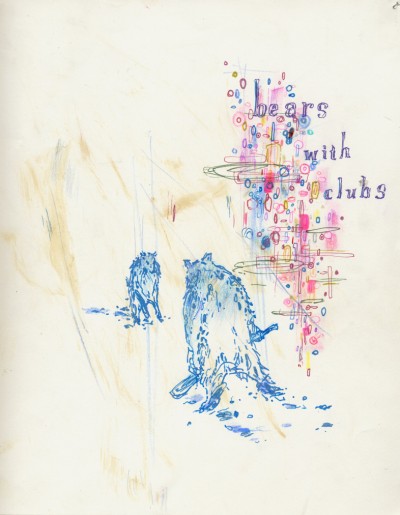 The gallery’s literature referenced cultural theorist Douglas Reichert Powell’s work on the intersecting politics of cultures in American landscapes: “Wisconessee is about a place, but it doesn’t come with a map as such. Instead, it’s a work of cultural geography, a map made of portraits.” Anderson and Bruttig’s abstractions call forth the spirits of forgotten folklore dwellings, and lands that never existed.  The kinetic, rugged doodles, and deliberately installed objects are the only documented fragments of ancestral wild things and places left behind. Wisconessee is scattered in Kasia Kay Projects like the scraps of an imaginary realm.

Wisconnessee is installed until October 12 at: