Africa and America collide in ‘Mythologies’ at Sullivan Galleries.

Mythologies at the Sullivan galleries, curated by Rashayla Marie Brown and co-organized by SAIC’s black student group, BaSAIC, takes questions of race, ethnicity, and identity head on. It is impossible to view the work without also acknowledging BaSAIC’s recent letter in F Newsmagazine criticizing “Billy Baller,” a piece by Chinese-Canadian artist Jason Guo, which was exhibited concurrently with “Mythologies” at Sullivan Gallery. BaSAIC alleges that the piece, which depicts the artist sitting on the shoulders black man in a basketball jersey, naked from the waist down, “ignores the painful history of slavery and the objectification of black bodies.”

Art has always been a petri-dish that breeds challenging and controversial discussions about race. In the popular media Spike Lee’s has condemned “Django Unchained,” stating “American slavery was not a Sergio Leone Spaghetti Western. It was a Holocaust.” BaSAIC’s letter echo’s Lee’s sentiment, that perhaps artists representing black identity are duty bound to acknowledge the ugliest parts of American history before employing that history for aesthetic or entertainment value. The art world was shocked in October when the New York Times published Ken Johnson’s review of “Now Dig This! Black Art in Los Angeles 1960- 1980” which included memorable zingers that both derided the work, “Black artists did not invent assemblage” (apparently Picasso did), and falsely praised it, “You don’t have to be black to feel that.” Though many artists were infuriated by Johnson’s review it also serves as a quintessential example of how racism persists, particularly in the form modernist-supremacy. The most blatant omission is that Johnson failed to acknowledge the major source of inspiration for many early modernists like Picasso, was Africa!

Needless to say, while many people throw around the phrase “post-race,” recent conversations in the popular media would assert that identity is still bound by skin color, and an exhibition about black identity is as timely as ever.

Alexandria Eregbu uses a variety of media to address her identity both as an artist and woman. Her piece, “All American Banner Series” sets the tone for the show with shiny collegiate banners created for artists Kara Walker, Kehinde Wiley and Mickalene Thomas. The banners are endearing and have a refreshing lack of irony in their celebration of the influential black women artists. In her video work, “Dirty Mouth” Eregbu creates a multi-frame video in which a young girl is depicted chewing and snapping gum. The visceral video places the spotlight on the girls mouth, and conjures stereotypes associated with black bodies and performance. In her adjacent piece, “Bringing it Black Again,” a new fabric, which at first glance appears to be kente cloth, it is created through cutting and editing her own digital images.

In the next room you can find pieces by Christina Long, “Henry Just A Hater,” that consists of two porcelain Victorian figurines with their skin painted black. Long’s re-appropriation of objects treads a little too closely to the work of artists like Kara Walker and Fred Wilson. While the piece depicts a striking scene, I feel like I have seen them, or something very similar, before.

David Alekhuogie presents several photographs that capture a palpable cultural tension embedded in objects. In the photograph “Things Fall Apart” a delicate multi-tiered card house balances on African motif fabric. The title refers to a book by the same name that explores the impact of British colonization of the African Ibo people in the late 19th century. Even without the literary reference one can intuit the physical tentativeness of the image, and the imminent collapse of the cards into brown and yellow print. In another of Alekhuogie’s photographs, “Beef,” a McDonald’s value meal rests on a bare mattress between a poster of Biggie Smalls, and one of Tupac Shakur that reads “power.respect.juice.how far will you go to get it.” The mundane hamburger serves as a dark symbol, and alludes to the manufactured and arbitrary nature of the lethal feud between the two young black artists. Alekhuogie’s titles activate his seemly static photographs, and hint at their layered consequences.

Cameron Welch contributed the most controversial piece in the show, “Misspelled Aggression,” a diptych that includes two grey scale paintings on opposite walls that appear to depict black and white scenes from a newspaper. Scrawled in large letters on top, one painting says, “ Nigga Please,” the other “Nigger Police”. The work critiques the misplaced aggression of blacks towards one another, and likewise the misplaced aggression of the police towards the black community. The phonic shift in the double entendre references the way that identity shifts, in relationship to external circumstance. This piece is anomalous to Welch’s other work in the show, which are expressionistic assemblages of painting and found objects. “Mixed Black Motif”, utilizes painting, kente cloth, gold spray paint and a golden mask. The painting seek to define as well as question the aestheticization of identity, as a “motif.”

Curator Rashayla Marie Brown was careful to choose diverse works from each artist that refer the both Africa, and to the black experience in America. This curatorial strategy provides an complex read of the many facets of identity. Whether in America or Africa there is a sense of longing, a yearning to reclaim and reinterpret history and identity through symbol, motifs, and icons . . . appropriately, that is what mythologies are made of. 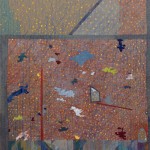