The term an “unauthorized” user is dangerously vague, inviting prosecutors to overreach, and the death of Swartz has injected a sense of urgency to those invested in clarifying murky legalities. The growing community of “hacktivists” that Swartz belonged to have come together to make a revision of the CFAA happen. For example, the Electronic Frontier Foundation (EFF), a San Francisco-based organization founded in 1990 that focuses on fighting bad legislation that would infringe on user digital rights. Activists at EFF have proposed two specific changes to the CFAA. First, they posted on their website, there needs to be a clarification on what is considered unauthorized access or “without authorization.” The common practice employed by savvy Internet users of changing IP addresses to protect privacy when accessing certain websites can lead them to be charged with a felony — meaning under the current terms of the CFAA it’s easy to send infringers to jail for a non-violent act like changing your IP address. The EFF is also calling for the reduction of penalties that have made it easier for prosecutors to pressure defendants. Representative Zoe Lofgren of California has also advocated for change. Just days after Swartz’s suicide she posted on social media site Reddit a draft of “Aaron’s Law,” essentially a revised version of the CFAA.

Aaron Swartz’s manifesto, his actions and now the reaction to his death are proof that there is a growing concern and awareness about the need for a more open circulation of knowledge and the need to break down paywalls and unnecessary restrictions to documents that were ultimately funded by taxpayer dollars. But the U.S. government has reacted most aggressively when it comes to their own information, as made evident in the very public cases of “hacktivists” Bradley Manning and Chicagoan Jeremy Hammond who, in their own acts of civil disobedience, allegedly provided documents to international whistleblowers at WikiLeaks. Hammond is currently in a metropolitan detention center in Manhattan with no option for bail, Manning is in prison with his attorneys claiming his past conditions of detention amount to torture, and WikiLeaks mastermind Julian Assange is unable to leave the Ecuadorian embassy in London (where he was granted political asylum).

That the government rejects calls for transparency and severely punishes whistleblowers is worrisome, to say the least. The actions of these hacktivists, are punishable by law, yes, in keeping with what defines acts of civil disobedience. But why are they being treated like terrorists? What makes this information so dangerous? Ultimately, it comes down to the circulation of knowledge — of power — that the government is forcefully trying to prevent. Are we all supposed to just sit and watch? 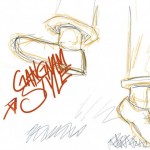