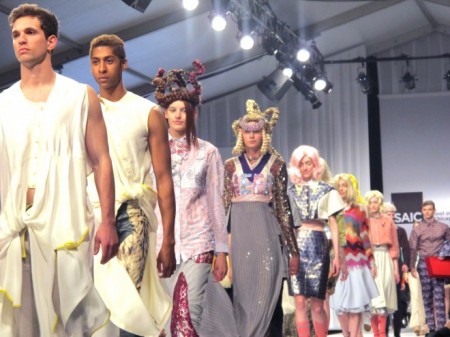 There was orderly chaos inside the maze of loaded clothing racks and lines of intricate garments ready to make their debut under the spotlights. Slender men and women waited in their underwear to be dressed, names boomed across the speakers, clothes were fitted, more models waited. Nerves, hairspray and excitement hung in the air.

It’s Bridget Crow’s third year participating in the fashion show, but her first as a designer. “This is really exciting. I’ve seen these garments evolve since the beginning of the year, and it’s great to see them on the runway finished and polished,” she says. “We worked all year towards something and here it is.” Her sophomore design is inspired by Edwardian era lingerie worn by young women during teatime gatherings. “An occasion for them to meet with their secret lovers,” she explains. 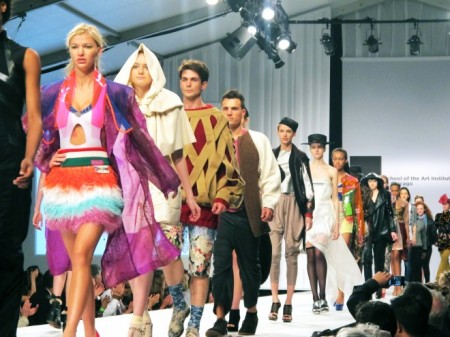 “I was inspired by the hunting of albinos in Africa,” says senior Leah Babbette as she waits for the show to begin. “They are hunted because they are believed to be magical. Their body parts are used in potions and different rituals.” Her metallic menswear collection “is a response to that feeling of physical entrapment by your skin.”

Kauri Voss has been a model at the SAIC’s show four years in a row. “When I started I worked with freshmen that are now seniors getting to display all their freaking talent.” When asked what’s different about SAIC student runways compared to others in the industry, model Colleen Kloster responds, “Freedom. They don’t have to sell (their designs) right away. So they get to be as creative as they can, because they can.”

“It’s really exciting to be wearing the future of fashion. All of the people in this room are going to be powerful voices in the fashion world; if not already, someday soon,” concludes model Jessica Ridemor. 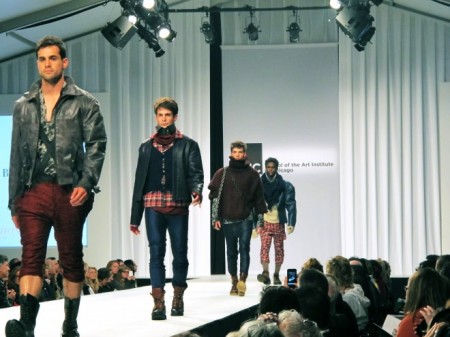 Dan Wittenberg is ready for his last show at SAIC. His collection, inspired by the anthropological and historical context of hermaphroditism will mark, as he describes it, “a long planned finale.”
Closing the white backstage curtain and leaving its rush behind, a whole different atmosphere is unveiled. Expectancy. A few privileged attendees have already taken some of the best seats close to the runway. Whispers, chatter, rows of perfectly lined black chairs adorned with bright green programs waiting on their seats. Nick Cave walks around in his black shiny boots, then suddenly disappears.

Outside the tent, a long line of people keeps growing along the south side of Millennium Park.

At three o’clock sharp the doors open and guests flow in — taking a second to look around the space before speeding up towards the available seats that disappear within a few minutes.

Not long after, the hallways go dark and lights brighten over the spotless white runway. Cave reappears becoming the first to mark the stage. “I’ve seen the show three times already and it’s great,” he says. He expresses the Fashion Department’s pride in presenting the results of their students’ hard work and welcomes everyone to SAIC’s 78th Fashion Show. He walks back towards the curtains. 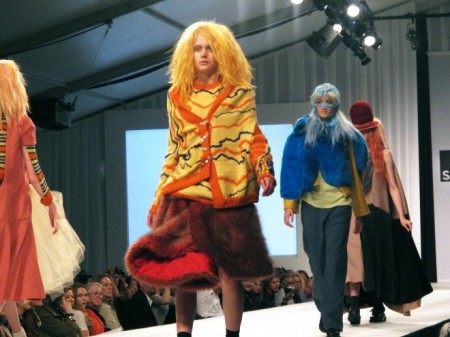 Loud, upbeat electronic music hightens the anticipation of the long-awaited first collection. Tosha Sherman’s design inaugurates the show. Music shifts rapidly back and forth in time, into sounds from the 1960s and ’70s and then far ahead into to Depeche Mode, Björk and Lana del Rey.

“A lot of post apocalyptic imagery … [and] denial or erosion of the self, which I’ve seen professionally with Alexander McQueen,” says Shahaia Yah, an enthusiastic attendee wearing a fur coat and bright red lipstick, about the themes she identifies in the runway. “Despite being so young, these students have their fingers on the pulse of what is happening in our society. It’s not only clothing, it’s a narrative,” she observes excitedly.
A red toy decorates a model’s hair. Masks, braids, sheer glamour and professionalism, faces in awe — there is much to see. A couple of flimsy ankles struggle with really high wedges, but finally there is applause — fulfillment of a job well done. 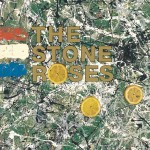 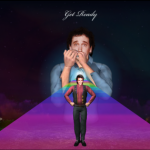