Live at the MCA: Andrew Bird and Ian Schneller

Bird wove a delicate and airy sonic web to the unanimous delight of the audience. 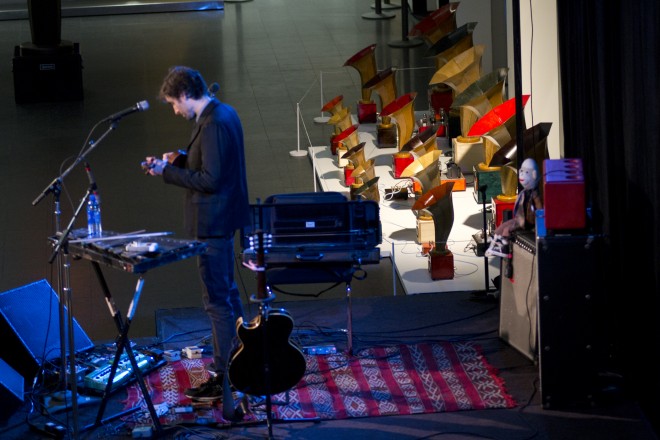 Andrew Bird and Ian Schneller took over the main floor of the Museum of Contemporary Art (MCA) for nearly the whole month of December. In small patches, meant to resemble a field of poppies or prairie flora, Schneller assembled collections of his iconic speakers. If you’ve ever seen Andrew Bird perform over the last decade or so, you probably noticed the large, colorful speakers shaped like old-time victrolas. It’s unlikely you missed the Janus Horn, the dual-horned piece that spins directly behind Bird at every performance.

Throughout December, visitors to the MCA could wander the Sonic Arboretum (as the exhibit is called) and follow site-specific music composed by Bird as it meandered through the speaker systems. In a special two-night engagement (December 21-22), Bird performed concerts on the MCA’s main floor. The museum has a perfectly lovely stage on its lower level that is traditionally host to theater events and concerts, but for the Bird/Schneller installation a small stage was built at the museum’s entrance — just barely raised above the ground and with it’s back to the floor-to-ceiling bank of windows. Bird, playing solo, took the stage and played a nearly two-hour long set to a rapt audience.

It’s difficult to imagine a more unique, or intimate setting to see Bird perform. Though the show was sold-out from its start, there couldn’t have been more than 200 attendees. Drinks were sold in the café and visitors were invited to stroll through the assembled speakers to gain the performance’s full effect. One could even, if you left your drink behind, peruse the museum’s collections on the main floor. Admiring a Dan Flavin light installation with Andrew Bird’s live music echoing around the museum is a truly unique art experience.

Bird played a quiet, subdued set, fitting the museum’s airy interior. He played a few familiar songs (“Measuring Cups”, “Skin”, “It’s Not Easy Being Green”) but gave them a deconstructed treatment. He plucked and bowed his violin, sending waves of sound bouncing from one speaker garden to another. He hummed and whistled prettily, and echoed those tones on guitar and glockenspiel. He wove a delicate and airy sonic web to the unanimous delight of the audience.

Bird is a charming performer. He never quite seems comfortable speaking in front of a crowd, often mumbling his quiet and amusing anecdotes. During this performance he remarked on his “nine-to-five job,” commuting to the museum to compose for the installation.  Yet when Bird is bowing his beloved violin, he seems transported. Suddenly he’s the only one in the room. His posture changes, his features soften and it’s easy to imagine him performing alone in his studio.

While Bird’s performance was what gathered the crowd, Ian Schneller’s speakers were and are a sight to behold. A sculptor, luthier and SAIC alumnus, Schneller has been producing unique guitars, tube amplifiers and audio horn speakers for more than 25 years out of the Chicago-based Specimen Products shop. The speakers are strikingly colored, bearing bold primary hues complemented by rich polished woodwork. He builds his speakers through a mysterious, alchemical process which utilizes compressed recycled newsprint and dryer lint. This fact alone is remarkable, but their status as some of the most prized and clear-toned speakers in the world is a true achievement.

Perhaps most interesting is the MCA’s role in the installation and performance. Tasked with being the most progressive arts institution in town, it seems that the museum’s curators have taken this charge to heart. The live performances booked at the downstairs theater have toed the line between populism and high art (like the WHY? show previously covered in F Newsmagazine). Bird and Schneller, both Chicago natives who bear a deep connection to their city, provide the MCA with a collaborative trump card against similarly-minded institutions. One can only hope more stunningly successful installations are in the works. 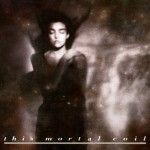