Brooklyn residents try to “turn the world inside out” with a public art project. 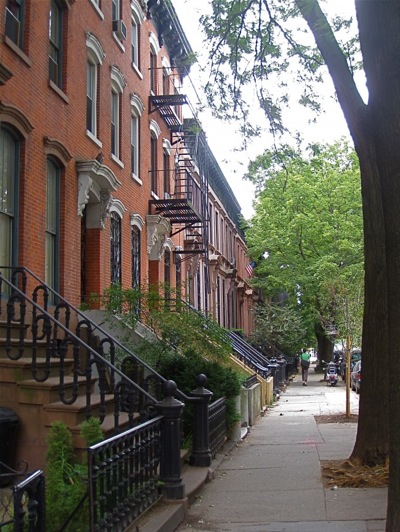 “I’m not an artist,” New Yorker Dana Eskelson disclaimed in July when describing her project in response to the Paris-based photo-graffiti artist JR’s global call to “stand up for what you care about.” JR is the 2011 recipient of the Technology, Entertainment, Design (TED) prize, which offers its winners the opportunity to make a wish to change the world with $100,000 and the support of the TED Community.

Accepting the prize in March, JR expressed his wish to “turn the world inside out” by inviting individuals and communities to take part in a global participatory art project. Stating, “what we see changes who we are, [and] when we act together, the whole thing is much more than the sum of the parts,” JR hoped that “together we’ll create something that the world will remember.” Called “Inside Out,” the project builds on the artistic process for which JR is known: close collaborations with communities to create large-scale photographic portraits of its members that are then affixed to the surfaces of public buildings. The images invite the public to seek out and speak with the individuals represented in the portraits.

“Inside Out” differs from JR’s past projects in that the role of the artist is turned over to the community members themselves. The project website, insideoutproject.net, provides the following simple instructions for participation: “Upload a portrait.  Receive a poster. Paste it for the world to see.” To date, over 9,000 photos have been uploaded to the project website in locations as wide-ranging as Cape Town, Oslo, Lima and Brooklyn.

Six months after the JR/TED team launched “Inside Out,” F Newsmagazine spoke with approximately 50 members of the Park Slope neighborhood of Brooklyn, New York, regarding the community’s implementation of one of the first “Inside Out” projects worldwide and the first in New York. Was this organically constructed project fulfilling JR’s wish to change the way members of a community see each other? 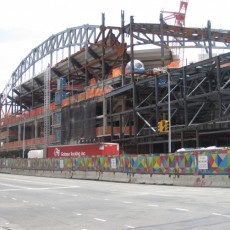 Park Slope is a culturally diverse area in the midst of gentrification, home to trendy new cafes, established corner bodegas and a contentious development project known as Atlantic Yards. According to its website, Atlantic Yards will consist of a public plaza, affordable housing, retail space and a new stadium for the New Jersey Nets basketball team.

Over the years, Atlantic Yards has been the subject of numerous protests. Many residents oppose the project, citing increased traffic and general disruption to the character of neighboring Brooklyn communities. Business owners in the area, however, generally express more complicated views of Atlantic Yards. Echoing the sentiments of most business owners interviewed, Pete Kocher, co-owner of Ride Brooklyn bike shop, stated, “Everyone will be impacted. It will be okay for business. For living…less so.”

Motivated by JR’s TED speech, Park Slope resident Dana Eskelson wanted to join “Inside Out” in making a difference but was unsure how to participate. She ultimately drew inspiration from the community she loved, the long-term shop owners who added texture and history to that community and her belief, shared by many residents, that “a lot of businesses can’t make it” because of Atlantic Yards.

Homeowner of a brownstone located on a leafy, moderately trafficked street approximately one block away from Atlantic Yards, the ten-year resident invited those of her neighbors whose houses possessed stoops, approximately 44 of the almost 60 houses located on her block, to participate in the art project. Eskelson wanted to recognize the local shop owners, “the vast majority [of which] are immigrants who have been here for years and are still here, despite the massive rent hikes and gentrification.” In a letter explaining the project’s purpose, she stated, “Will [the shop owners] be able to stay once the stadium is built? We have come to depend on them – and yet they all remain largely unknown, and somewhat unseen.  I’d like to change that. I’d like to show our appreciation and honor and thank them…I’d like them to be able to tell their story.” Seventeen residents representing 11 brownstones donated their stoops for the project. 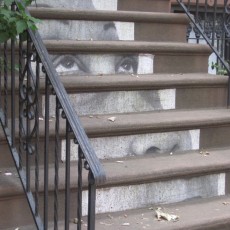 Detail of Inside Out Project Installation. Image courtesy Mina Matlon

“Everyone had an opinion,” Eskelson noted of the business owners neighbors wanted profiled on their stoops. She made the final selections, choosing 11 individuals, 10 of whom are immigrants, and, after a friend took the owner’s photographs, picked which photos would be turned into portraits. On May 9, Eskelson, her family, friends and several neighbors attached the portraits to the participating brownstone stoops.

When I toured the art installation several months later I was greeted by photographs intermittently spaced on both sides of the block in the form of 36 by 48 inch black and white head shots cut horizontally and pasted across the brownstones’ stairs. Some of the faces smiled directly at me, while others appeared stern, downcast or stared contemplatively into the distance; none of the images contained any identifying information. The photographs’ sheer size made them compelling, but their placement on the stoops distorted the faces, rendering several of them difficult to discern. The tired or concerned expression in so many of the portraits, combined with their distortion, created an overall impression of something lost.

The installation of this first “Inside Out” project in New York was followed by generally favorable press coverage in the New York Times, the Wall Street Journal, the Huffington Post and the Brooklyn Paper. But a closer review of the Park Slope project reveals striking differences from the participatory model existing in JR’s own projects and envisioned in JR’s TED wish.

When We Act Together

Eskelson’s belief that the project “brought my neighbors closer together,” was countered by a participating neighbor, who asked not to be named in this article due to concerns that the neighbor’s frankness would not be well-received by other neighbors:  “[It was] not a unifying project at all.” Rather, when the portraits went up, “my neighbor looked at mine, and I looked at theirs, and that’s it.” The resident further expressed dissatisfaction with the business-owner selection process, feeling no real connection with the individual ultimately featured on the resident’s stoop. 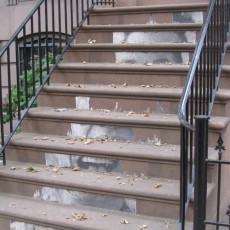 Detail of Inside Out Project Installation. Image courtesy Mina Matlon

Similarly, all six of the interviewed profiled business owners noted that their sole involvement in the project was having their photo taken. Echoing the experience related by most owners, Paul, the thirty-year owner of a fruit and vegetable store, had little knowledge of the resident on whose stoop his photo had been placed and was unable to identify many of the other owner participants. Regular customers had informed him that his photo had been pasted, and he had been to the block to see his photo. As Eskelson suspected, neither Paul nor any of the other owners had more than a vague understanding as to the purpose of the project.

Eskelson has not spoken with the owners regarding their experience with the project. As quoted by the Wall Street Journal, “I haven’t asked the business owners what they think. I don’t want to pressure them to thank me. I just wanted to do it and have people feel whatever they feel.” She was not alone: none of the residents interviewed for this article had asked their profiled business owners what they thought of the project. Reflecting on the experience, the resident who asked to remain anonymous felt strongly that the project would have had more of an impact with greater participation from the residents and better communication with the business owners: “What should have happened [is that] you … have to do a little more legwork, really talk to people.”

What We See Changes Who We Are

Interviews with Park Slope community members revealed that very few were aware of or understood the purpose of the Park Slope project. Many residents had walked directly past the portraits and failed to notice them. Those who had seen the project either did not recognize the profiled owners or incorrectly identified them. For example, told that all the photographs were of local vendors, a barista at a coffee shop a block away from the project insisted, “I’m pretty sure I saw some famous dead people, like Albert Einstein. You’re sure?” 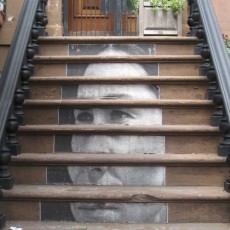 When informed that the primary purpose of the project was to provide local business owners who would be impacted by Atlantic Yards with recognition and support, there was unanimous support for the project by residents.

The profiled business owners, on the other hand, did not share the presumption inherent in the project’s purpose. Language difficulties made it hard to ascertain some of the owners’ full views on Atlantic Yards, but the participating owners generally shared the cautious view of the business community that Atlantic Yards could have a positive impact on business in the neighborhood. Residents’ misperception of the owners’ views clearly indicated that the profiled business owners remained unseen and unheard by residents.

“Inside Out” set out to change the world through a participatory art project but provided minimal guidance on how community collaborations should take place. In Park Slope, the project appears to have been lost in translation. Michelle, a profiled owner of a Mediterranean restaurant, summarized the Park Slope project: “I don’t know how much impact it has had.”

Arts & Culture, Uncategorized Looking Inside Out in Brooklyn
« Previous Story 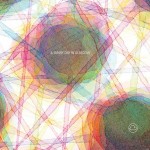 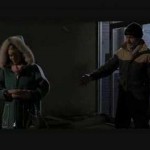