Putting Cairo in a Gallery: An Evening with Bas Princen at Townhouse Gallery All photos are by the author. Townhouse. A name and art space that has become familiar to Cairenes (and Egyptians in general) over the past couple of years. This gallery has become a hub for cultural activities across the region, known by …

Putting Cairo in a Gallery: An Evening with Bas Princen at Townhouse Gallery

All photos are by the author. 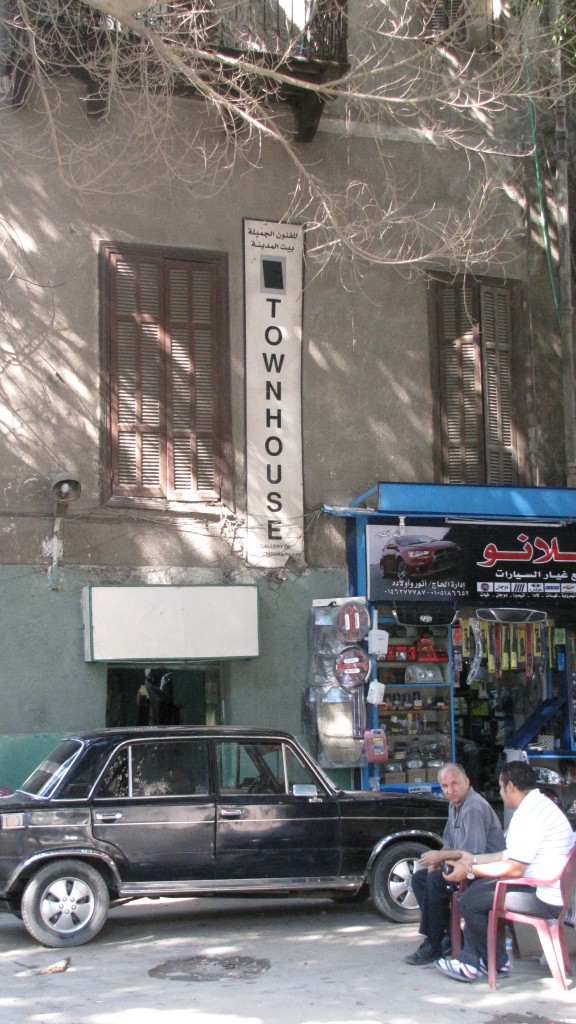 Townhouse. A name and art space that has become familiar to Cairenes (and Egyptians in general) over the past couple of years. This gallery has become a hub for cultural activities across the region, known by artists around the world. June 19 marked the opening of their last exhibition of the season. A series of photographs by Dutch artist Bas Princen attracted many viewers that day. The opening was followed by an artist talk in the middle of the gallery.

Townhouse Gallery is a space for independent art that  exhibits works by local, regional and international contemporary artists throughout the year. The institution encompasses exhibition spaces, classrooms, a library and studios. The gallery has expanded throughout the years to include programs of visual arts, music, theater and film, and runs a multitude of programs for  minority communities (including those with special needs; working children; and Iraqi and Sudanese refugees). The gallery was one of the first privately owned non-profit contemporary art spaces in Egypt, and today, Townhouse is also one of the largest private exhibition spaces in the Middle East

The gallery is located in the heart of Cairo, in the downtown (or wust el balad) neighborhood that was also the site of the liveliest demonstrations during the Revolution. Although it is adjacent to a big and well-known street in downtown Cairo, to reach Townhouse, you find yourself walking in a small alley, as if in a village somewhere else. This is Cairo. Beautiful and modern streets often hide much poorer neighborhoods. 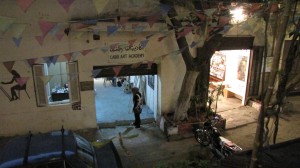 More of the Townhouse complex

At the end of the muddy alley, what looks like a very modest three-story building stands on its own. If it weren’t for the bold inscription “TOWNHOUSE” on the front, people wouldn’t have guessed that inside this structure is probably one of the most influential spaces in the region.

Surrounding the building is a popular street café, with lots of people sitting, drinking tea and smoking hookah. They seem to be used to seeing all sorts of people, from Egyptians to tourists, photographers and reporters. Unlike many popular cafés, this café is full of foreigners, artists and locals, all mingling together. 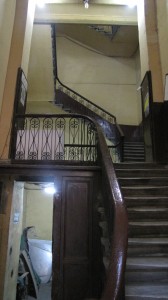 Inside the main building

The inside of the building appears a bit shabby. The staircase is rundown, and the marble is deteriorating.

The exhibition was on the first floor, spread among three rooms. Each one had about four to five photographs of rural and urban landscapes. Reading the explanation of the exhibition, entitled “Refuge – Five Cities Portfolio,” gave me a better understanding of what I saw. Dutch architecture photographer Bas Princen traveled to five cities that have witnessed dramatic changes in the past 50 years: Dubai (United Arab Emirates), Amman (Jordan), Istanbul (Turkey), Cairo (Egypt) and Beirut (Lebanon).

Going through the different pictures, I immediately recognized those taken in Cairo. The way the buildings were built, the red bricks used, the cars present in the scene, the rural landscapes; everything looked familiar. Some other pictures were somehow recognizable, but I couldn’t tell if they were taken in my hometown or somewhere else. I started looking for tiny elements, like a flag in the background or a license plate, to situate myself. I went around several times to try to get as much information as possible, because the photographs weren’t titled or labeled. Meanwhile, the photographer was standing in the middle of the gallery, chatting and talking about his work. 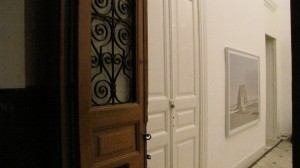 Many people were there that day. I immediately noticed a woman who seemed very knowledgeable about the artist’s work. I understood later that she worked with him at some point. She was surrounded by what looked like students, very eager to hear what she had to say and introduce them to Princen. A couple of women were taking notes, probably to write an architectural critique. We exchanged notes at the end of the night, but they never really told me what they were doing. They focused mainly on Princen’s process and his architectural background. Elderly people were also present, either taking a quick look at the work or staying longer for the talk. A couple of curious men came in at some point. They were probably walking in the neighborhood and decided to see what was going on. That is one of the strong points of Townhouse. Everybody (no matter what their background) feels comfortable coming in and taking a look. 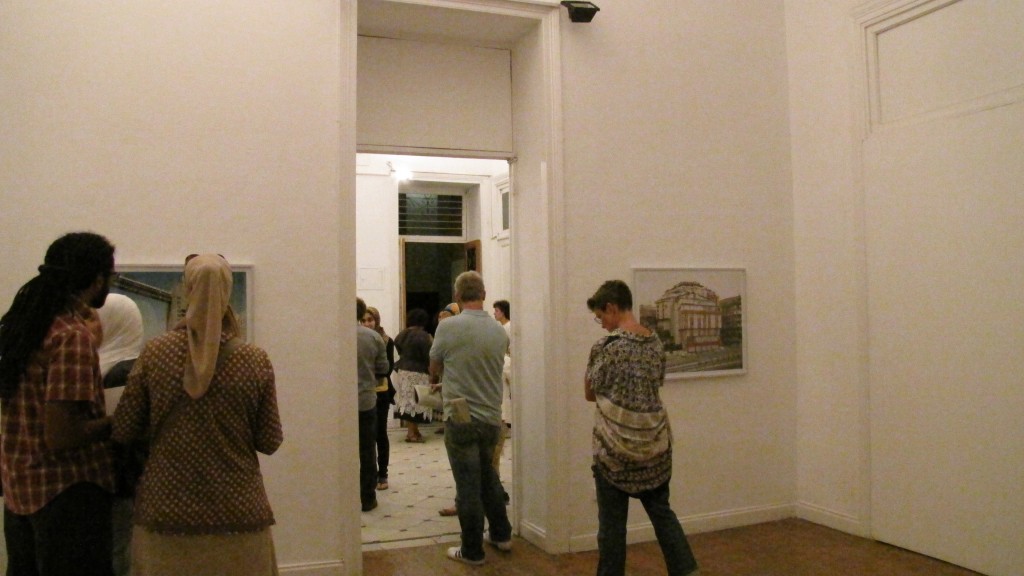 An hour later, Princen stood in the room with the photographs I believed were taken in Egypt and started explaining his process, how the idea for the exhibition came to be and how he took it from there. He explained he was trained as an architect but now works as a photographer. In 2009, a project entitled “Open City Team” in Rotterdam started it all. Princen was asked to examine the changes in the urban fabric of five cities. He focused on the edge of the cities, because he saw things that are similar in all of them. Princen chose those five specific cities due to the recent developments in each one of them. He explained he had never been to any one of them, and so was looking at them as a tourist. 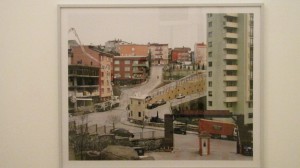 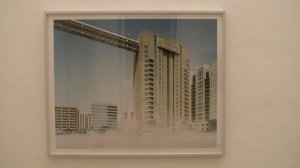 Princen wanted to “photograph the cities as a single one”;  he looked for the similarities between them, while still distinguishing the discrepancies. Cairo was the first city he photographed. “The first one is always the easiest, everything is still open,” he said. Later, he had to connect the others cities together.

The exhibit was shown at the International Architecture Biennale in 2009, and then at Istanbul’s European Capital of Culture events in 2010. It was just shown in Amman, before coming to Townhouse. 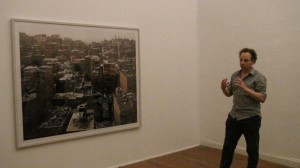 The artist discussing his work.

Princen revealed that in Istanbul and in Amman, people recognized their own cities, but didn’t connect to any of the other images. It was interesting to hear him talk about other people’s reactions to his work, because I had just experienced it in a similar way. He asked us what we thought about the pictures in the room we were standing in, pictures of Cairo: “I’m curious,” he said.

There were two main pictures. The first one was a picture of the outskirts of the city, a very poor neighborhood, with brick structures and lots of rubbish. In the background, the city was fading away. It was probably the most striking picture of the exhibition.

The second picture was of a rural landscape with a brick tower in the middle of practically nowhere. Princen thought it was funny; why have a tower in such a place?

Princen asked us how could a city develop this way, and if we found that normal. Someone replied, “It’s not normal, but it’s possible. We see it all the time here.” Another woman said that we are somehow disconnected from the pictures, because we live in the more developed part of the city — the part that is fading in the background of one of the pictures. 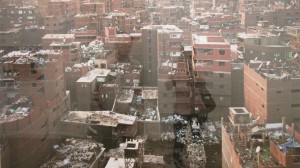 Although I did not find the photographs expressly artistic or meant to convey emotions, it was very insightful to see Princen’s view of Cairo, and even more so to hear about people’s experiences towards the images of the different cities. The artist talk was very valuable in understanding the process Princen went through, and made me realize he saw his work as an analysis, more than as a piece of art. The contrast between the rural areas and the desert versus the constructions and machines was riveting. 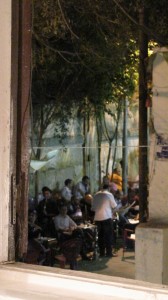 View of the street cafe from the gallery window

However, I do wonder about Princen’s view of Egypt. It seems very pessimistic and one-sided. Egypt has a multitude of facets, and it doesn’t seem fair to portray a city through only one of those facets. I understand that the artist was looking at the outskirts of those five cities, but I did not feel the exhibition gave a full image of the places. The Middle East is going through a lot of changes, and people are becoming more and more patriotic and attached to their countries. Princen’s outlook is that of a tourist, and does not encompass those new-found feelings. Perhaps this is because he took those photographs a while back, and also because he only visited each city for ten days — definitely not enough time to grasp a well-rounded idea of its people and landscape.

On the other hand, seeing these images in the white cube made me question them all over again, and see them from another perspective. In the end, I suppose this is the purpose of any successful exhibition: making the viewer cross-examine a part of life again and again. 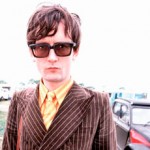 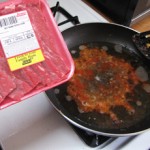 One Response to Tourist Pictures, or Critical Commentary?