A couple of days ago I looked into the Democracy Now portal and ran across something  I did not expect and that impressed me greatly. It was a video from an interview with the young Jewish artist Emily Henochowicz. She is a 22-year-old student at the Cooper Union art program in NYC, and a talented, bright, and outgoing girl. Her hair was covering half of her face, including one of her eyes. As I listened to the interview I learned that Emily had lost her eye when she was shot in the face by an Israeli tear gas canister as she was protesting for Palestinian rights at the border region, just after Israel attacked the humanitarian aid ship on its way to Gaza last year. Fortunately, Emily survived the incident, but the doctors couldn’t save her eye, and it is probably impossible to explain what that loss means for a visual artist. The Israeli government refused to pay for her medical expenses and Emily was left with large hospital bills, a terrible memory, and a different way of seeing to get used to.

In the interview she explained that her work hasn’t really been affected by the loss of her eye, and she even said that her limited depth perspective is sometimes helpful in translating what she sees into paper or canvas. She is not the same, though, she admits. Some of Emily’s work has always been political, but after that trip that changed her life she feels more committed than ever to speak up against injustice.  She is not afraid to go back to Palestine, and she is determined to do so to keep protesting in the name of peace. After what happened, and the attention her case got from the media, she has received letters of support from different parts of the world, but she has also received criticism from the Jewish community, as she is a Jew who fights for the rights of the Palestinians.

Emily’s level of maturity and eloquence are impressive. She doesn’t seem to be angry or resentful for what happened to her, and she even takes it with humor. She doodled on the left lens of her glasses and her looks have become a distinctive aspect of her personality. 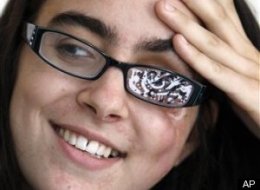 Her work goes from childish and funny, to dark, harsh. As most art students, she struggles to get funds for her projects and sells prints from her drawings to help with the mission. Emily is also a good writer; she has two blogs (Chloe’s Hideout and Thirsty Pixels)   were she shows her work and puts her thoughts into words. She writes about politics, art, and even the personal experience of having seen footage showing from different angles and perspectives the moment she got shot.

The interviewers from Democracy Now didn’t seem to be as much interested in her work as they were in what happened to her. In fact, I found it insensitive that they kept referencing the incident over and over, before and after every cut, as if that were the only interesting thing to say about her (although I well understand that is necessary in TV news for viewers who turn on their television after the interview starts.) They presented the interview in as the central story in their website, as a global broadcast story, and announce it with capital letters as an “EXCLUSIVE.” Most young artists would do anything for that exposure, but I wonder if the incident will end up helping her career or shadowing it.  Is the MEDIATIC always good for artist’s careers?

You can watch the interview here and tell me what you think.

From the Utopian to the Sinister 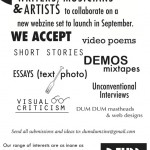