From the Utopian to the Sinister

A Review of “Public Works” at the Museum of Contemporary Photography

Pictures of Buildings and Infrastructure at the Museum of Contemporary Photography

In “Public Works,” hard infrastructure emerges as the main character amidst a diverse array of photographic projects that celebrate, question and examine the role of seemingly mundane aspects of the built environment. On view through July 17 at the Museum of Contemporary Photography, this collection (sometimes overwhelming in scope) approaches its subject matter from the twentieth century’s evolving perspectives on infrastructure as a utopian expression of progress, to its most sinister social and political potentialities. Curator Natasha Egan notes in her exhibition text the parallel and intersecting histories of large-scale building and contemporary photography due to the latter’s suitability in capturing “the grandeur of large public works.” In the lineage of popular culture studies, “Public Works” validates anyone who has ever paused to study the curvature of a highway exchange, or questioned the real reasons behind construction scaffolding. 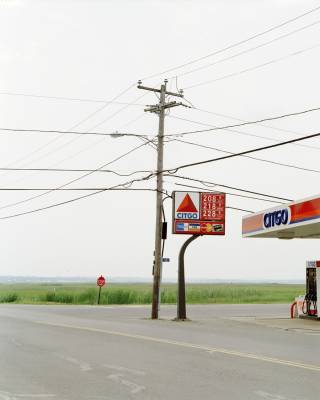 Berlin-based artist Armin Linke’s ambitiously scaled and visually exquisite works open the show. For Linke, infrastructure is symbolic of humanity’s intercessions on the natural landscape, as seen in the remains of the former USSR’s once famed spaceport, Cosmodrome (2001). Here, the concrete launch pad is portrayed as a physical scar in the barren Kazakh landscape, reminiscent of Michael Heizer’s Double Negative (1969), a seminal land artwork cut into a mesa in the Nevada desert.

In a quieter way, German photographer Frank Breuer’s documentation of jury-rigged, derelict, yet still vital above-ground power lines (taken during a 2004-2005 residency in Cambridge, Massachusetts) also speaks to issues of visual pollution and infrastructural debris in our contemporary environment. Their matter-of-fact, central framing against overcast skies makes these often visually forgotten structures strikingly visible once more through the eyes of an outside observer.

As an interesting counterpoint to these remnants of Cold War enthusiasm, works by contemporary Chinese photographers speak to the rapid pace of development in the name of modernization. Xu Jianrong reflects on his personal history, revisiting the Shanghai locations of childhood walks documented by his father, Xu Xixian, and finding expressways where amusement parks had been. Chinese-American Sze Tsung Leong questions larger urban issues of displacement as construction cranes loom over traditional terrace farms in the monumentally scaled exhibition standout from his History Images series (2004). 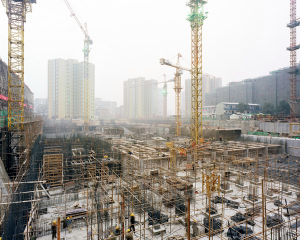 The show’s curators seem deeply engaged in historicizing these contemporary works in relationship to architectural and anthropological photography. What is curious from a pedagogical perspective, however, is their decision to dedicate the majority of space in the upstairs galleries to early American documentation projects, like the Farm Security Administration’s depictions of rural blight and O. Winston Linke’s Norfolk and Western railway series. References to mid-century pioneers in photographing the everyday built environment outside a specifically documentary context, like Robert Venturi and Denise Scott Brown’s iconic “A Significance for A&P Parking Lots, or Learning from Las Vegas” (1977) in academia, or Ed Ruscha’s “Every Building on the Sunset Strip” (1966) in fine art, are conspicuously absent despite their key conceptual influence.

Despite this seeming oversight, however, there is still a rich variety of photographic practice here to choose from, including nods to digital and video work that serve to expand the definition of documentation. Despite the presence of several pointedly critical works, the tone is not excessively political. The show instead prefers to meander, probe and occasionally pause upon the notion of infrastructure itself, gratifyingly refocusing the history of the genre through the lens of the roads and rails that have made it possible.

Arts & Culture, Uncategorized From the Utopian to the Sinister
« Previous Story 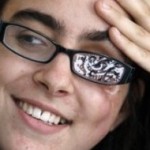