“The Cave of Forgotten Dreams” reveals a prehistoric cave in 3D, but still conceals secrets.

The growing trend of 3D in film seems to be a mere excuse to motivate consumers to pay for more expensive tickets without really enriching the stories they tell. 3D films are generally produced by big-budget studios that rarely generate anything transcendental in terms of art making.

Standing farthest away from the commercial tradition is 68 year-old filmmaker Werner Herzog. Before “Cave of Forgotten Dreams” came out last year, it would have been almost contradictory to imagine the director of movies like “Aguirre: The Wrath of God” (1972), “Fitzcarraldo” (1982), and the 2005 documentary “Grizzly Man,” to ever be working in 3D filmmaking. But if anyone has the power to vindicate what 3D can do for filmmaking, it’s Herzog. In fact, “Cave of Forgotten Dreams” was just named the highest-grossing independently released documentary of 2011.

In “Cave of Forgotten Dreams,” Herzog tells the story of the Chauvet-Pont-d’Arc Cave in the south of France, which housed a secret for over 32,000 years. Sealed shut after a major cave-in that blocked any access, even to light, the cave became a preservation site for ancient wall paintings and artifacts as fragile as bear footprints. The cave and its evidence of paleolithic life was discovered in 1994 by a group of three speleologists.

Herzog´s decision to use this technology was strongly justified by his commitment in staying true to the intentions and talent of Paleolithic artists who created the oldest art work known in human history. After this movie, though, Herzog told the LA Times that has no interest in ever working in 3-D again.

The director had unprecedented access to film inside the cave from the French Ministry of Culture, unlike many other filmmakers who requested permission as well. His success in gaining access to film inside the cave meant that millions of people could now see inside the walls of this magic time capsule. Entry into the cave is generally denied to people other than very few scientists, since the human breath has already caused mold to grow on the walls.

Accessing the cave was just the beginning of the challenge. The logistics once inside were extremely complicated. Because of concerns about toxic carbon dioxide accumulations, Herzog’s access was limited to four hours a day for six days. Once his four-person crew was inside the cave, they had to remain inside a narrow two-foot-wide walkway that was installed to preserve the damp floor of the cave. Herzog had to use lighting that didn’t emit any heat, and of course, there was the challenge of shooting it all in 3D. “We were shooting in three dimensions, but we could only move in one dimension, since you couldn’t step around anyone without leaving the walkway,” he explained to the NY Times in April this year.

For Herzog, shooting in such a space had to be done in 3D because of the very dramatic interior of the cave. Not only are there wonderful crystal shiny stalactites and stalagmites, but there are also very complex wall surfaces with bulges, niches and undulations that were utilized by the artists to generate certain effects in their paintings, and Herzog wanted to respect that intention.

What the movie shows is absolutely fascinating, and the brilliant handling of light when showing the paintings makes viewers appreciate them as those Paleolithic artists did with the limited light of their torches moving along the surfaces revealing parts of the paintings and darkening others.  The effect is breathtaking. The cave drawings, made largely with charcoal, are surprisingly modern.

The drawings of bison hug the contours of the cave, a bulge in the rock serving as the animal’s hump. Woolly mammoths are depicted in eight different phases, as if they were frames in an animated film. “There is something that touches us instantaneously, something that is completely awesome. What you are witnessing is the origin of the modern human soul and the beginning of figurative representation, ” he told the NY Times in April. The music adds up emotion to this exciting experience at the time the 3D technology lets us have a closer impression of what being inside such as space would be like.

The three dimensionality in the film does wonders showing the volume and formations of the cave, but it doesn’t work quite so well when people appear on screen. Some scenes show people inside the cave and the 3D effect makes the images momentarily blurry and sort of awkward, although that doesn’t really affect much the impact the movie has on viewers.

Especially when the documentary shows interviews with scientists and art historians, the film feels, for moments, like any other documentary. But in addition to the film’s magical images and cameo by the rare albino crocodile, “Cave of Forgotten Dreams” contains a true Herzogian quality that is both delightful and challenging for followers of his work.

Through this film, Herzog shares with us part of a mystical secret of immense value. Still, the film does not reveal some of the cave’s most hidden corners, where not even Herzog and his crew where able to look, and perhaps no one ever will. 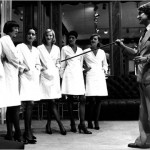