For-Profit Galleries in Zamalek All photos are by the author, unless otherwise noted.                           In the past decade, galleries in Cairo have made a huge effort to represent contemporary Egyptian artists, from those with established careers to younger, emerging ones. Some of these …

All photos are by the author, unless otherwise noted. 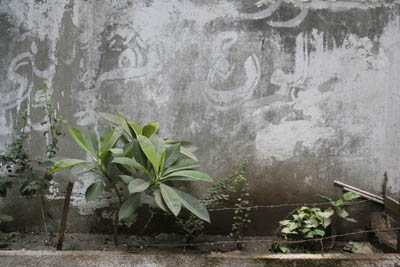 Barbara Armburster, "Green." From a current exhibition at the Safar Khan Gallery. Image courtesy of the gallery.

In the past decade, galleries in Cairo have made a huge effort to represent contemporary Egyptian artists, from those with established careers to younger, emerging ones. Some of these artists work with very oriental themes, while others prefer not to be confined to their culture and work in a more international aesthetic. Coming back home to Cairo, I thought that, no matter what the style, I would find an abundance of revolutionary art (or at least obviously Egypt-themed art) in our galleries.

To my surprise, the spaces I have visited so far are showing what they usually show. The Zamalek neighborhood (an upscale area in central Cairo, evocatively situated on an island in the Nile) is home to some of the most prominent art galleries in Cairo. In today’s column, I will give you some insight into three renowned galleries: the Zamalek Art Gallery, Picasso Gallery and Safar Khan. 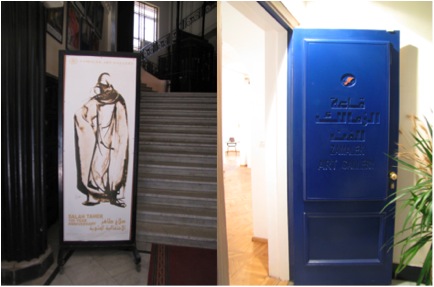 The Zamalek Art Gallery is celebrating its ten-year anniversary soon. Since its opening, the gallery has featured some of Egypt’s most recognized artists, including Gazbia Sirry, Mohamed Abla, former Minister of Culture Farouk Hosni, and Farghali Abdel Hafez, among many others. When I visited, the gallery was exhibiting 100 works by Salah Taher, commemorating the 100th anniversary of the artist’s birth.

Salah Taher (1911-2007) was an Egyptian artist who quickly became internationally recognized. He was appointed head of Cairo’s Museum of Modern Egyptian Art in the ’60s, and then head of the Opera. He was later hired by Al Ahram (Egypt’s governmentally–owned daily newspaper) to decorate the walls of their offices and work as an artistic consultant. He was a respected arts administrator, as well as a prolific artist. 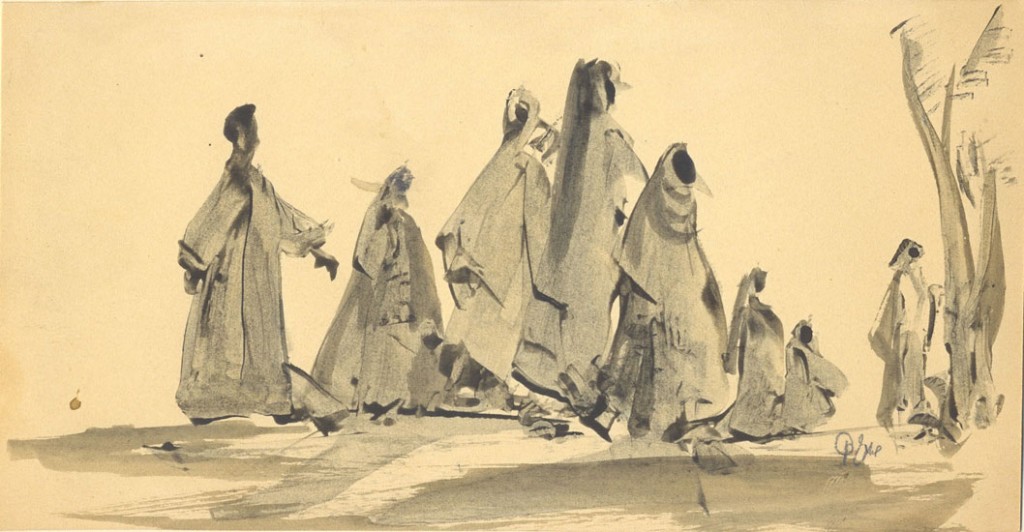 From realistic imagery to abstract forms, Taher’s work was highly varied, and the exhibition at Zamalek Gallery showcased that diversity. The 100 works in the six rooms of the gallery were perfectly hung. The show well illustrated the artist’s stylistic evolution, as well as similarities such as the bold colors and thick black lines that are present in both his watercolors and oil paintings. The crisp white walls of the space and its sleek hardwood floors ensured your total attention was on the artwork. 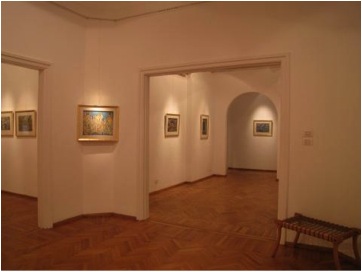 The gallery doesn’t allow photography, but in Egypt rules can be bent (either with a nice smile, or a couple of dollars – in this case, a smile was sufficient).

I had a very interesting conversation with Hani Yassin, the gallery attendant. He explained that he comes from a modest background, and didn’t know much about art before working in this gallery. He slowly started to appreciate the value of the paintings he was selling and understand the quality of the works. Yassin told me he doesn’t measure the success of an exhibition by the amount of sales. He sees the exhibition as a cultural event, and his and the gallery’s role as presenting art to the public.

We also talked about the revolution, of course. These days, we all talk about the revolution; it is the best ice-breaking topic and everybody has an opinion on the matter. Yassin acknowledged that the revolution was bound to happen as there were so many things going wrong in the country, but admits he would still rather elect someone he is familiar with, even if it means someone from the old regime. There is always this fear of the unknown, and we always say in Egypt, “what we know is better than what we don’t know.” This philosophy is what enabled Mubarak to rule for 30 years.

When I asked Yassin about art after the revolution, he stated that the gallery organized an exhibition entitled “Mother Egypt” right after Mubarak’s resignation. Several artists donated paintings, either older or fairly recent ones, and the gallery sold them at a 30% discount. The proceeds were put in an account called “Support the Egyptian Economy” created by the Central Bank. The exhibition opened on March 6 and was supposed to close at the end of the month, but lasted until late April. Only two of the 36 paintings were created after the revolution. One was an acrylic and charcoal on canvas, painted by Emad Ibrahim. The abstract painting represents several figures battling against some sort of violent airstream. Some are standing, others surrender and have fallen to the ground. The other piece was a photograph of Tahrir Square taking on a busy night by Boulos Ayoub Geday, the blurry orange streetlights strongly contrasting against the dark blue night.

After we were done talking politics, Yassin explained that the gallery is now working with the Kempinski, a five-star hotel that opened in Cairo in May 2010. Zamalek is organizing a monthly exhibition at the hotel, for what they call an art festival. This event will take place over the period of a year. At the moment, 35 paintings hang on the walls of the Kempinski to complement the Zamalek Art Gallery’s exhibition. 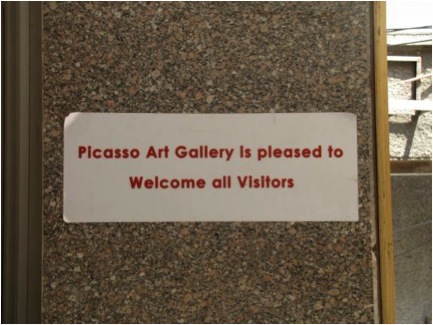 Sign that amused me at the entrance of the gallery (which you actually only see on your way out).

Picasso Art Gallery is another space in the neighborhood that always has interesting exhibitions. In early June, the gallery was showing works by Makram Henain (who, like Salah Taher, also worked at Al Ahram). Henain is lesser known than Taher, and in all honestly, I was not familiar with his work. The exhibition left me uninspired; I felt the work was naïve. I am not an art critic, but I want to share my impressions with you here. 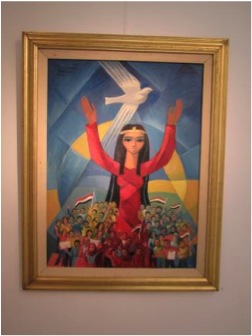 During my visit, the gallery director, Ibrahim Abd El-Rahman, gave me two photocopied papers, one written by the artist himself. The exhibition is entitled “Spirituality Between Reality and Imagination,” and in his essay, the artist tries to link the work to the revolution. The subject matter consists of Egyptian peasants, surrounded by symbols such as the sun that represent hope. The colors are primary and the forms are simple.

There was a space in the gallery specifically dedicated to the revolution. The simple sketches shown here also seemed child-like.

The gallery director was not very talkative, so the whole experience was quite speedy. Although I wasn’t excited about the art, I did like the space. Located in a small street, it felt homey. The gallery has a store right next to the main space, where you can find paintings by lesser-known artists. This area feels like a thrift store, and you can find amazing paintings at good prices if you look closely. The Picasso Gallery also work with artists and galleries to frame paintings. 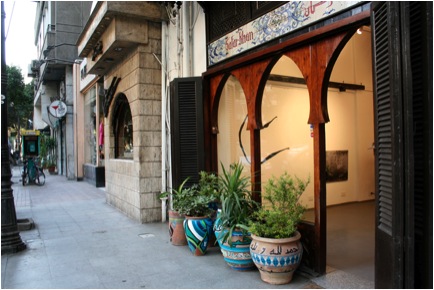 The last gallery I visited on my Zamalek gallery crawl was Safar Khan, which had an exhibition by Barbara Armbruster, a German artist who lives between her native country and Egypt. The exhibit was entitled “The Green, the Street and the Scent of Life,” and included mostly works on paper, along with some photographs.

Armbruster says she is “fascinated by the green alleys in the streets of Cairo, by the plants, little trees along or in front of buildings.” Her description of the greenery of Cairo took me by surprise because this is definitely not what I see in the streets here. Cairo for me is grey, sometimes brown. Looking at her drawings, featuring gigantic leaves, it wasn’t easy for me to link it to my hometown. 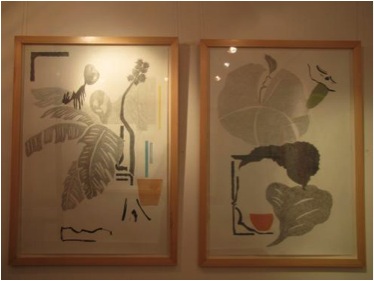 Her photographs, on the other hand, addressed my concern perfectly. Plants located here and there through the streets of Cairo are what obviously attract the artist’s attention. In the midst of the grey and brown, Armbruster manages to perceive green –a lot of it, for that matter.

Safar Khan itself seemed to be a perfect place for Armbruster’s work. The gallery’s wooden staircase takes up a huge amount of the space, but it also complemented the subject matter of this exhibition. There were also plants lined up against the space’s main entrance and windows, giving an additional dimension to the exhibition.

Studying arts administration for a year has changed the way I perceive galleries, and I found myself noticing small things, like the type of lighting, the font used on the labels, and also people’s interactions in a gallery. There is space for improvement in most of the galleries I know, which reassures me in a way. Labels are sometimes missing, or misspell artists’ names. The lighting is often not appropriate, and gallery attendants are not always very well trained. The catalogues need to be reworked on in most cases, as well. There is a need for professional arts administrators, or at least I hope so! 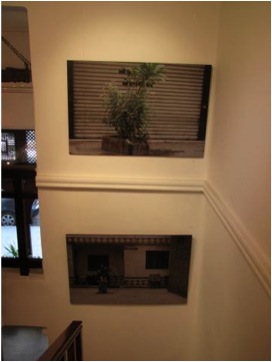 Two photographs located at the base of the staircas

Although the exhibitions were not what I had expected, I still enjoyed going through each and every one of them. I did not find revolutionary art, but this is perhaps because we are in June, already four months after the resignation of Mubarak. Galleries already organized their post-revolution exhibitions and are slowly, but surely, going back to their usual patterns.

It might also be too soon to notice the impact of the revolution on artists’ works in general. I am interested in the way the art market will react to those events in the long run. Some younger artists I know do not like to be defined as Egyptian artists, but rather as just artists. For this reason, they refuse to make revolutionary art, thinking it will limit them too much, or confine them to a certain category. In general, I believe that it is too early to determine how the revolution has impacted us, as Egyptians. Only time will tell how it will really manifest itself, in the art world and also in society as a whole.

Even if I didn’t find what I expected to, the exhibitions I saw were eye-opening in different ways. Leaving the last gallery, I started to notice the greenery of Cairo. I still don’t find it green per se, but I am starting to appreciate a small bush here and there.

Check out “Letters from Egypt” next week for more gallery visits and exhibition reviews. Mehri Khalil will also visit the Egyptian Museum, which was looted during the Revolution, and bring you an update on what’s happened to the Museum since then. 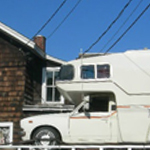 How to Book a D.I.Y Tour 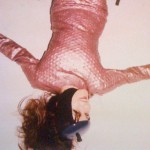