Prior to the “budget repair” bill’s passing in Wisconsin, a major protest took place at the Capitol on February 26. SAIC student Daryl Meador recounts her experience at the protest.

Photos and text by Daryl Meador

On February 26, 2010, an estimated 70,000 to 100,000 people marched at the capitol building in Madison, WI in protest of the “budget repair” bill  introduced on February 11 by Republican Governor Scott Walker. The bill, which was passed by Senate on March 10, proposes that state employees contribute 5.8% of their salaries to cover pension costs, contribute 12.6% towards their health care premiums. This bill would also weaken collective bargaining rights for most public employee union members. Walker has denied any attempt to compromise on the bill. As a form of protest, all 14 Democratic Senators of Wisconsin fled to Illinois the state in on February 17 to avoid voting on the bill. 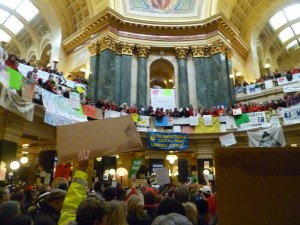 Despite freezing and snowy conditions on February 26, the protesters at the Capitol were jubilant and energetic as throngs of people circled the building. The protesters were young and old, male and female, and held a diverse array of signs from various unions and neighboring states showing solidarity. One woman’s sign read “These are dark times Harry… Bookworms against the Bill”. Another read “One dictator down, one to go” alongside a photo of overthrown Egyptian president Hosni Mubarak. Many signs alluded to Scott Walker’s ties to the Koch brothers, the owners of a controversial conglomerate that is rumored to fund the Tea Party.

A line to enter the Capitol reached around the side of the building and was kept organized by volunteers. The line moved quickly, and once inside the Capitol, visitors were welcomed by a small band playing in a hallway covered with posters. Inside the center rotunda of the Capitol, a large crowd gathered around an open mic, and in the levels above the rotunda, protestors gathered to listen and watch the goings-on below. Every wall of the building held signs and banners holding words protesting Walker’s bill. There was a first aid center and a general information center at which volunteers were waiting to help. Protestors who had been camping out in the Capitol lined the walls with sleeping bags and didn’t seem to worry about leaving personal belongings unattended. There was a charging station for cell phones and a center to leave and acquire literature and magazines for those who needed something to do while camping out overnight. 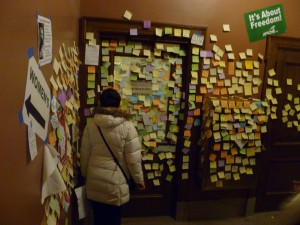 In the upper levels, people milled about and conversed with each other, comparing signs and trading stories. Below, union members and protestors voiced their opinions on the mic and were followed with energetic chants. Unions would periodically parade through to loud applause, including the firefighter’s union, who were exempt from the effects of the bill. A high school marching band from Milwaukee performed for ten minutes while people danced and jumped. The police stood somewhat awkwardly amidst the crowds as facilitators, but did not intervene with the protesters. It’s unlikely that anyone who was inside the Capitol Building on February 26 will soon forget the words chanted most often day: This is what democracy looks like. 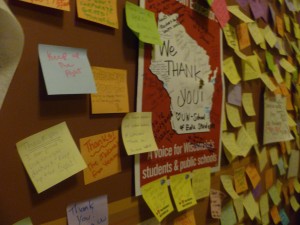 Since that day, an even larger protest took place on March 11, when an estimated 100,000 people stormed the Capitol to protest the March 10 passing of the bill. On March 19, a Wisconsin Judge placed a temporary hold on the bill to prevent its implementation until it could be proven that it did not violate state Open Meetings Laws. A full hearing is scheduled for March 29.

Uncategorized This Is What Democracy Looks Like: Madison, WI
« Previous Story 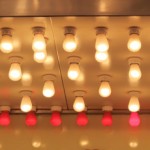