The Battle for the Unions: Walker Wins and We All Lose

Since Walker proposed this bill on February 14 and signed it into law on March 9, Madison has seen its largest protests since the Vietnam War, topping 100,000 people as of March 11.

“Kill the Bill!”
“Care about Teachers the way they care about your kids!”
“For Sale: One Governor. Cheap!”

These are only a few of the slogans written on signs at protests held over the last month in Madison, Wisconsin while rallying against Governor Scott Walker’s “Senate Bill 11.” The bill is designed to aid in the state’s budget deficit by dramatically increasing the health care and pension rates paid by government workers as well as almost completely eliminating collective bargaining in state trade unions.

Since Walker proposed this bill on February 14 and signed it into law on March 9, Madison has seen its largest protests since the Vietnam War, topping 100,000 people as of March 11. The capital rotunda has been a weeks-long campground for incensed union workers now stripped of their long-standing rights to collective bargaining, along with a much smaller number of Walker supporters holding a counter-protest.

Walker’s bill and the ensuing protests have become a national story, as 14 Democratic Senators fled to Illinois in an attempt to prevent a voting quorum in the state senate. Republican Senate Majority Leader Scott Fitzgerald called this move “cowardly” and “a vacation disguised as a political tactic.” One Republican supporter, David Licary of Milton, Wisconsin, stated, “Elected officials are elected and paid to show up to work. If I or anyone else in the private sector acted as the democratic state senators are acting, we would be fired and looking for a new job. The people that elected them should demand better representation of the people they voted for.” But many Walker opponents said the Democratic state senators were indeed representing their constituents by attempting to block the anti-union bill. 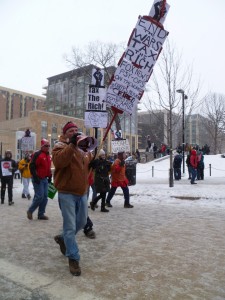 For thousands of Democrats and union workers statewide, the move was nothing short of heroic. “I feel it has been a brilliant move, I hope they stay away,” said Tricia Harris, a union member of 18 years. “This Governor has basically shown that he has no communication skills. The Democrats are doing the right thing showing the people that they will go to this great length to represent our rights.”

While Walker claimed union leaders and Democratic Senators refused to negotiate in order to reduce the budget deficit, in reality, as early as February 18, Democratic Senators had agreed to the financial stipulations of the bill, raising premiums for their health insurance from 6 to 12.6 percent and their pension rates to 5.8 percent from less than 1 percent.

It seemed as if the stalemate in the Senate would never end as of February 23, when a popular liberal blogger prank-called Walker claiming to be billionaire conservative David Koch. After the phone conversation was leaked to numerous news outlets and Walker’s plans to “crumble” the Democratic opposition became public knowledge, Walker seemed more determined then ever not to bend to the Democratic Senators’ wishes. State officers were tasked with finding the 14 Senators, whose paychecks were withheld and their parking spaces withdrawn. Walker released a statement warning that up to 1,500 layoffs were imminent within the week unless his bill was passed. However, the Senators return remained improbable.

On March 9, GOP Senators and Walker moved to pass the bill without Democratic input. After passing the motion through the state House on February 25—after 60 hours of debate before sleepless Democrats knew what was happening—Republican Senators pushed through some of their own changes to the labor law. They removed the need for a quorum on the proposed bill, which was then passed.

Governor Walker and Senate Majority Leader Fitzgerald stood behind their actions, publicly deeming their motivations as “getting the job we were elected to do, done.” Statements from Democrats differed greatly.

“In 30 minutes, 18 state Senators undid 50 years of civil rights in Wisconsin. Their disrespect for the people of Wisconsin and their rights is an outrage that will never be forgotten,” said Democratic Senate Minority Leader Mark Miller in a press release published after the bill’s passing on March 11.

Since the bill’s passage in the state Senate March 9, protesters have poured into the capital, demanding a recall next year, or even an impeachment for Governor Walker.

SAIC student and native Wisconsinite Alyssa Schaefer grew up in a state where paying taxes and public workers in order to ensure quality education, safe streets, and a worthy community was seen as admirable. Her parents have been public educators for 40 years, and union members for just as long. They’ve enjoyed fair and negotiable salaries, clean classrooms, reasonable class sizes, and funded schools. Schaefer said that “unions never gave public workers fancy cars, vacation homes or diamond jewelry, but they ensured a voice working for those people who were dedicated to the betterment of their community.” She believes that the potential elimination of collective bargaining rights “is truly a disgrace to working people” and that this battle is not just about losing money but about losing rights.

Uncategorized The Battle for the Unions: Walker Wins and We All Lose
« Previous Story 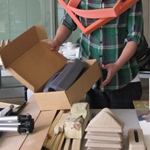 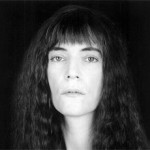