The happiest birthday to Seuss up in Heaven. If he were alive, he’d be a hundred and seven.

So what if he wasn’t really a doctor? His work contributed greatly to the intellectual development of children the world over. 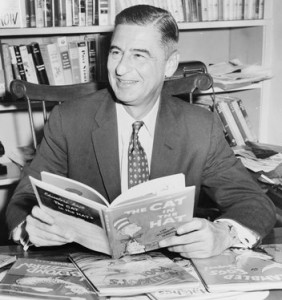 Today would have been Theodor “Dr. Seuss” Giesel’s 107th birthday.

The story goes that in the 1950’s, Time Magazine published an article about the illiteracy rate growing dramatically among children in the United States. Educators said that children weren’t stimulated by their books.

In response to the article, Random House publisher Bennet Cerf approached Giesel, and proposed a series of books that would serve as vocabulary builders. Each book has a restricted number of words, used repetitively, and printed with accompanying illustrations that would engage the child’s interest. Each book would add a few dozen words to the child’s vocabulary, and would nurture visual thinking by helping to forge connections in young minds between written text and imagery.

His work often had political undertones, and It’s interesting to look at the work Giesel was doing before he’d established himself as a children’s book author.

In celebration of National Reading Month, why not order a copy of Richard H. Minear’s Dr. Seuss Goes To War? It offers a collection of cartoons Giesel did for PM (a liberal magazine published in New York) at the height of World War II. Giesel was an early advocate for the U.S. becoming militarily involved in the conflict, and was an ardent critic of those in the United States who perpetuated anti-semitc sentiments. Perhaps the most disturbing cartoon from this period is one of Charles Lindbergh shovling dead cats onto the street from a giant litter box on wheels, the caption reading “Spreading the lovely Goebbles’ stuff.” 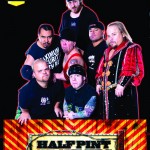