This month, we look at Noamme Elisha, a first-year student focusing on sound art. Prior to attending SAIC, Noamme wrote music and recorded with her band Nebulosa in Bucharest, Romania.

Brandon Kosters: So music. How did you get involved with it? 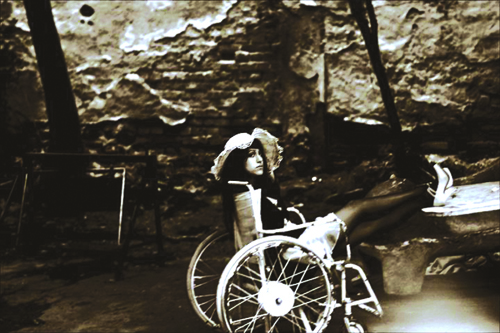 Noamme Elisha: I started taking piano lessons at the age of four, and I’m still going strong. When I was in fifth grade, rock and roll became pretty cool, so I took up the electric guitar. I got bored with it pretty quick, and I switched to the bass guitar. So on one side I had piano where I was playing classical music, and then I joined a jazz band with my bass guitar and that was all high school. When I was 16, I started to get involved with the Romanian music industry — all the bands that were happening, production that was happening — and I started looking for people to play with that were sort of outside my miserable music scene at the school. I started playing with some really good musicians. I mean, it’s a very small music scene, like 25 people or something like that. I started out playing with this guy as his side project from his big successful band.

BK: What was the name of the band?

NE: We were called Nebulosa. We were together for two years and then I came here. We gigged locally. We got some nice reviews in Europe, like in Sweden for some reason, and we released our EP this winter when I came to visit. And now I’m here, I guess.

BK: Are you from Romania originally?

NE: No. Originally I’m from Israel. I grew up in Romania. I moved there when I was four.

BK: How, in your experience, does the Chicago music scene differ from what you knew in Romania?

NE: Well, if you look at the grand scheme of things, Bucharest (where I grew up) is a pretty small city. I mean, the music there was just developing. It was all sort of post-communist, so everything was starting to come out. You have all this great art and music and the film industry is doing really well. But things were just starting out, where here it’s just been … [around] forever. It’s a lot more elitist here. It’s been hard to find good people to play with. Here, it’s also a lot less liberal, because I mean … you wanna go see a local show, you need to be 21. A couple weeks ago I wanted to go see a jazz show at five in the afternoon on a Sunday, and they wouldn’t let me in. I just wanted a lemonade, man. So that’s kind of different.

BK: What instruments do you play?

NE: Piano is sort of my main instrument, but in terms of gigging it’s definitely bass guitar. And vocals. I also sing.

BK: And so you’ve been taking elective courses in the sound department?

NE: Yes. I just started the Max MSP course [Max MSP is a digital music platform paired with a visualizer]. That’s pretty cool. I mean, coming here I sort of left my traditional music background, and started experimenting with a lot of electronics. A lot of “do-it-yourself” stuff. So that’s really fun. Like synthesis. These are all things that I didn’t have back home, so it’s nice to try them out over here. I’m trying to incorporate classical piano work with electro-trash kind of stuff.

BK: Do you produce visual work?

BK: I’m personally very interested in the way that visual art can be used to promote and enrich music. I also think it’s interesting to think about the history of something like music video, and different avenues and visual media that have been used as promotional vehicles. The whole thing of constructing and perpetuating some sort of image. What are your thoughts on any of that?

NE: I would rather focus on sound and music and doing everything I can just with the audio. And for sure, I’m gonna get bored of it at some point and be like “OK. I need to …” Or for example, I’d be playing with my band and I’d be like ‘OK. We need some visuals in the background.

Let’s put some weird Chinese movie in the background just to contrast [the sound] …’ Stuff like that. I mean, the visual is pretty important. Especially if you’re playing in a band, right? I think the audience remembers a lot more of what it sees than what it hears.

BK: Do you have any ideas about how you might want to integrate the visual element into your music in the future?

NE: Silver. Silver could be pretty. 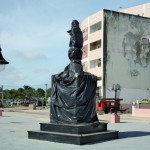 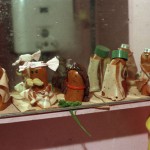