Thank goodness! Our advice gurus have decided to run for Mayor. But where do they stand on the REAL issues?

F’s advice gurus duke it out for Daley’s crown.

Citizens of Chicago: your prayers have been answered.

Team Baskauskas-Kosters has temporarily split and tossed competing hats in the ring for the coveted mayoral seat. With the fall of the Daley Dynasty, there are a lot of pertinent questions that Chicagoans need answered. What is to be done about the alligators that have been dumped into the Chicago River? Just as we were done mourning the loss of the Jerry Springer Show, we now must gear up for our last few months of Oprah. Can the combined team of Steve Wilkos and Judge Judy really fill that gap? And then, of course, there’s ambiguity about what this will mean in terms of local government funding for the arts. All pressing issues. Let’s elaborate on our platforms. 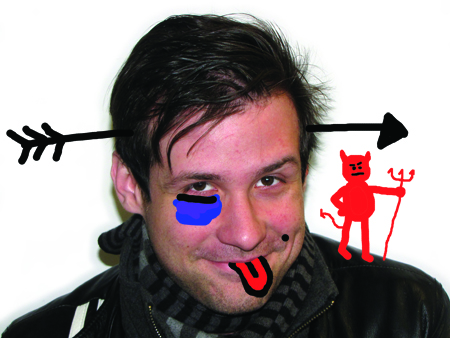 Unless the child of a gay couple was the product of an earlier failed heterosexual relationship, a gay parent is likely a parent who chose to adopt or bring in a surrogate. Meaning what? Gays don’t usually accidentally conceive children. A gay parent probably made a conscious decision to become a parent. The options were weighed, the social stigma was considered, and this hypothetical gay Chicagoan still said: “I need to love and nurture this child, no matter what.” And that is why, as Mayor, I will legally mandate that only gay couples may marry and have children.

The proof is in the pudding, Chicago: Nothing has damaged the institution of marriage or the nuclear family quite like heterosexuality.

“Less is more?” This was architect Mies van der Rohe’s justification for building skyscrapers that were little more than glass panes on a steel skeleton in Chicago. Practical and boring, like a rice cake.

Then after a while, architects got bored with looking at buildings that made them think of rice cakes, and designed buildings that proved that while “more is more,” “more” is not necessarily “better.”
The solution is simple.

We’ve got to level everything, and only erect buildings that look like dinosaurs.

Just Because You’re Endangered, That Doesn’t Mean You Have To Be Ugly

With the harshness of the Chicago winter, what can be done to expedite global warming in our favor? And how, you may ask, can we speed that process up without completely phasing the polar bear out of existence?

Well, I hate to be the one to break it to you, but the polar bear has been on his way out of for some time. Sure, there are those in the scientific community who might take offense. But hey: you guys have been studying the situation for decades, and what have you been able to tell us, other than that things are getting progressively worse each year? Step aside, pessimistic nerds. It’s time Mayor Kosters took over. What’s more productive? Waiting around for another 20 years for the scientific community to reveal that everything is the worst it’s ever been, or dedicating time and resources available now to making the polar bears look REALLY sexy as they dwindle into extinction?

As Mayor of Chicago, I pledge to divert 25-87% of all the money currently going to the public schools on the South Side to procuring 7,000 cans of Aqua-net, a stylist, and enough power generators and blow dryers to be flown to the Arctic Tundra to simultaneously deplete the Ozone layer, and give the polar bears amazing hairdos.

Let them go out in one last stylish blaze of glory.

A production crew will be sent out to document all of this, and this will yield a daytime reality television program, aired to help fill the void left in Oprah’s absence. 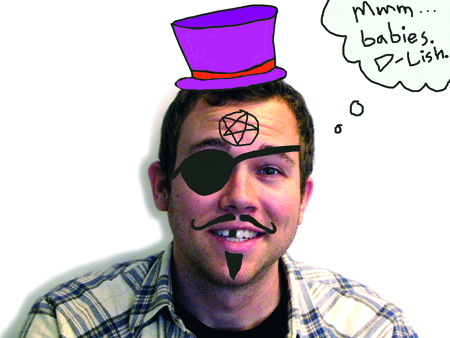 Early this year the EPA urged the nation’s public water systems to evaluate the presence of chromium-6, a toxin that’s been linked to stomach cancer. Lake Michigan, source of Chicago’s tap water, was reported to have dangerous levels (0.18 parts per billion) of this heavy metal. People seem to be concerned about its presence, but let’s be honest: DEATH TO FALSE METAL! Am I right, folks? 0.18 parts per billion?! It’s like drinking a Winger concert.

As mayor, I pledge to get that lake up to snuff. Bid farewell to your KISS tea set. Say goodbye to your POISON spray-tan. Nothing says “I rock hard” like rock-hard water. I’ll have this whole city playing air guitar to the sounds of upset stomachs in time for the inaugural [headbanger’s] ball, which will be catered by MUNICIPAL WASTE. With any luck, my tenure will be affectionately referred to as the “Reign in Blood” by the time I’m out of here. I’m talking pre-haircut METALLICA thrash here. I’ll throw ANTHRAX in the lake if I have to!

One of the hardest parts of being a benevolent dictator is striking that balance between tyranny and oppression. It’s important to consistently remind your subjects who’s in charge. My predecessor, Richard M. Daley, Mayor, knew this all too well. So well that his name is just about everywhere in this city. His moniker shows up in so many places, in fact, that it would be too much work to remove it when he finally leaves office.
I promise to legally change my name to “Richard M. Daley, Mayor” so nobody has to go around finding and changing all those signs and posters and other things which bear his (my) name. It will be a seamless transition into a new era of political presence. As a bonus, this will drastically cut down on the environmental impact of destroying a bunch of his stuff and then making a bunch of new stuff with my name on it. You heard it here first: I’m putting lazy opportunism back where it belongs — the Daley Center (say, that’s where the mayor’s office is, right?).

Perhaps the most important of my platforms is bettering the city’s relationship with artists. I know past rulers have been very “public” about the art we have here, but our artists are always just a bunch of know-nothing, high-profile out-of-towners, selected more for their status in snobby art circles than for their ability to actually produce art. They fly in, give us some trash, ask us to put it somewhere, and then they leave. Take Millennium Park’s sculpture by Anish Kapoor. He calls it “Cloud Gate.” Nice try, but everyone normal calls it “the bean” … an obvious failure, lost in translation between big-art government and the real people of this great country. Ceci n’est pas une “cloud gate.” Similarly, there’s a reason the Picasso sculpture in Daley Plaza is “Untitled”: it stinks! I won’t bore you with a list of the city’s other public art failures, lest this begin to resemble some kind of Yoko Ono performance.

No, enough with the past. The future is bright! For the first time in 15 years, spray-paint will again be available for purchase in Chicago. I will lift the citywide ban and fully encourage our youngsters to make their mark on our town. The streets are our canvas, and life is our paintbrush. Paint on, brothers and sisters!

In conjunction with the lifting of the spray-paint ban, I will be imposing a citywide ban on graffiti that doesn’t read “Richard M. Daley, Mayor.” Compromise, folks.

(Yoko Ono will not be asked to produce any work under this new plan.) 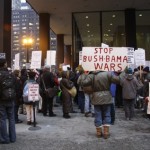 Chicago Protesters Rally Against the FBI on January 25th