Racist Vandalism at the Sullivan Galleries?! 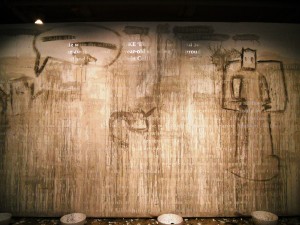 M.F.A. student Anida Yoeu Ali's 1700% Project after being vandalized in the Sullivan Galleries.

In the midst of last week madness and paper-writing, I haven’t been back to the Sullivan Galleries to check out the M.F.A. again since opening night. This afternoon, I was shocked to find out that yesterday, someone else found the time to do so, and while they were at it vandalized a displayed art work in what looks to be a racially motivated act, covering M.F.A. student Anida Yoeu Ali’s 1700% Project (a work about the depiction of Arabs and Muslims in the mass media) with graffiti, removing all the brochures and educational material, and highlighting the words “Kill All Arabs” with a text bubble. The artist’s performance at the gallery this Saturday, May 15th at 12:30, will address the vandalism.

I am deeply disturbed and disgusted that this could happen to any artwork on campus, regardless of its political or social content.

Despite Sullivan Galleries’ incredibly dense and complicated rules and safety regulations that you have to comply with to exhibit in the galleries, I have often remarked to myself that once the work is up, safety goes out the window. Apart from opening nights, when I’ve visited the galleries in the past, I have often found them completely unattended, sometimes with video or sound pieces turned off and no one around to ask to turn them back on. This, of course, is but a mere annoyance. The fact that someone could get into the gallery and commit such an act towards an artwork, on the other hand, is a serious problem.

Finally, the apparently racist motivations for the vandalism are deeply disturbing, especially if this was an act committed by another student, which would point to a very real problem at the heart of the School.

The press release is copied below. Check out Anida’s blog here to find more pictures of the vandalism.

On Tuesday May 11 at 12:30pm, Anida Yoeu Ali, a graduate student at the School of the Art Institute Chicago (SAIC) found her art installation defaced with large caricatures and a word bubble strategically highlighting the text “Kill all Arabs.” Across a wall space measuring 18 feet x 9 feet, the installation exhibits 100 lines of white vinyl text composed from actual hate crimes experienced by people perceived as Muslims and Arabs. As part of the live performance of her installation, the wall had been stained with ink drippings to make the seemingly invisible ‘hate crime’ text more visible. Ali’s installation is part of her larger ongoing series of work, the 1700% Project, a collaborative project that uses art as a form of response to hate crimes.

Ali comments, “This is not just an assault on me as an artist, this is an attack on multiple communities to which the work speaks for.”
The 1700% Project, Ali’s Graduate Thesis work, intervenes against the racial profiling and rise of violence and hate directed at Muslims in a post 9/11 era through poetry, video, audio recording, performances, and installation.

Dr. Nora Taylor, Department of Art History Graduate Director comments, “Students who put themselves at risk in presenting works and
expressing their deepest and most personal sentiments are in no way responsible for other people’s acts of bigotry or for other people’s political leanings. As a community, we should support personal expressions by students in the context of exhibitions and studio presentations, no matter what political or religious inclination they might project, but we should never support offense or violence by other students against their views. Anida Yoeu Ali has devoted her life to fighting prejudice and violence. I am saddened that such immature behavior was displayed on the part of those who vandalized her work.”

According to the police report filed, “The person(s) used the stains & materials left in the space for the defacement. There is no invitation for anyone to interact with the materials. The work has statements on the wall plate, takeaway brochure & the wall itself indicating the work is about ‘hate crimes’.” There are no suspects for the incident.

Sullivan Galleries, located at the 7th floor of one of SAIC’s administrative buildings, is open to the public with a sign-in sheet at the lobby that is easily bypassed by visitors. There are no security cameras inside the northeast gallery space where Ali’s work resides. Ali believes that the school’s decision to not comply with her initial request for the placement of the work to be in a more visible public area allowed this crime to happen in broad daylight.

SAIC Graduate Student in Sculpture Maya Isabella Mackrandilal comments, “Good art is always a risk, and as a community of artists, despite our differences, it is essential that we support our craft by respecting one another. Regardless of the level of malicious intent behind this act it is a violation of the basic respect that all artistic production deserves.”

No other art installations displayed at the Sullivan Galleries were vandalized.

Community activist Adriel Luis of iLL-Literacy comments, “During these moments when so many politics are involved, it can be hard to take time out to process the loss of a piece of artwork. At the same time, I think this is so telling of the times, and with the Times Square bombing attempt and all the fear-mongering, more than ever this is a good time to spread awareness.” The 1700% Project was featured on NPR’s Worldview last week as part of its latest focus on Islamic Reform and identity. Ali’s interview segment is about American Muslims using art as a vehicle for expression and social change. Since then, the 1700% Project has attracted attention and dialogue.

Mackrandilal adds, “Through mockery and defacement, this act of vandalism has silenced a call to be heard. This makes it an act of violence and I sincerely hope that the SAIC community treats this incident with the seriousness that it warrants.”

SAIC deans, Student Affairs and other faculty are meeting today to discuss the incident and Ali’s request for further investigation and action. Lisa Wainwright, Dean of Faculty, has stated that Ali will receive compensation for materials loss and the school will work with Ali to restore the art back to its original display. Ali will not allow this setback to silence or disrupt her goals to perform in front of the installation space on Saturday May 15.

“Based on this recent incident, I am responding by modifying my Saturday performance to include a facilitated dialogue with faculty, students, the public and the communities to which these acts of hate and bias crimes address.” During her performance Ali will ask the public to join her in the staining process. Ali further states, “We must work to transform the marks of vandalism and hate into public acts of collective healing and reclamation. This is a call to action to respond as a community within and beyond the borders of School of the Art Institute Chicago!”

To view images of the defaced artwork click here:
http://1700percentproject.wordpress.com/2010/05/09/documentation-of-1700-project-iterations/

The public performance for the “1700% Project:Otherance” is scheduled for Saturday, May 15th at 12:30pm in Sullivan Galleries at the wall installation. A final closing performance is also scheduled for Friday, May 21st at 4:30pm. All events are open to the public and free of charge. The exhibition at Sullivan Galleries (33 S. State, 7th Floor) runs from April 30 – May 21, 2010. Gallery hours are from Tu-Sa 11am-6pm. 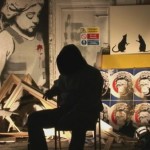 “Exit Through the Gift Shop”