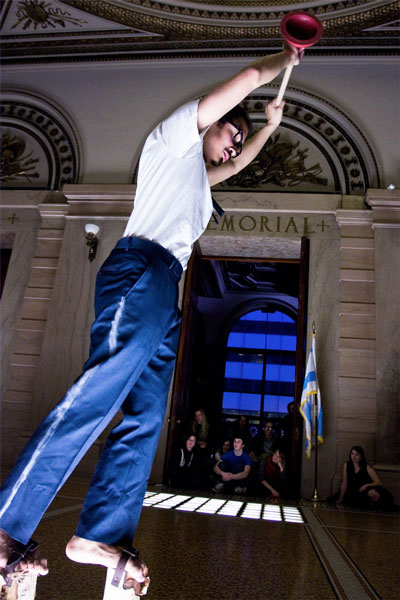 The world of performance art is not widely experienced by those outside of the performance community. In an effort to change that, the Chicago Department of Cultural Affairs and the School of the Art Institute Chicago’s (SAIC) Performance Department teamed up to present their second iteration of IN>TIME, a weekend-long performance series which ran March 26-27, uniting local, national and international artists in an exploration of new performance practices through a variety of media.

The project was spearheaded by SAIC Performance Department faculty member Mark Jeffrey, and SAIC alum Sara Schnadt, currently a webmaster for Chicago Artists Resource. “Sara Schnadt and I came together in 2006 feeling disappointed with the performance scene as a whole here in Chicago. We were interested in bringing a visual arts, movement-based mission to the work that we wanted to be seen here in the city. So in 2008 we began the first iteration of IN>TIME,” explained Jeffrey in an interview with F.

Having already begun a collaborative dialogue with Claire Sutton, the Director of Theatre at the Department of Cultural Affairs in 2006, their combined discourse and shared concerns led to the eventual conceptualization of IN>TIME.

More than just a chance for others to see them perform, it was important for Jeffrey that the series expose the Chicago performance community to emerging and established work by national and international artists, as well as give burgeoning performance artists a post-school opportunity to see their work develop professionally.

“As we know, or, as I certainly remember, one of the biggest challenges about being a student is to make work post-school. How do you do it? And how the hell do you get the support?” Jeffrey said. This is something that he has continued to explore throughout his career.

“The other thing that has affected my career in performance, even after 16 years, is how I continue it,” Jeffrey commented. “What I’ve begun to realize, especially being in the United States of America as compared to being in Europe, is that one has to sort of multiply oneself in order to sustain oneself.”

To help mentor the transition from student to working artist, Jeffrey and Schnadt developed an incubation program that functions within the IN>TIME series. Interested students can submit their portfolio to an advisory board called the Chicago Performance Network (CPN), also founded by Jeffrey and Schnadt, and if chosen, have the opportunity to develop a piece with the support of Jeffrey and the CPN while utilizing free studio space provided by the Chicago Cultural Center.

SAIC alum Justin Cabrillos (MFA ’09) was lucky enough to score one of those spots. “One of the best things was having the space at the Cultural Center. I was working in the studio theatre and in the dance studio, because my piece involves movement and voice and various tasks and actions and so forth,” he explained.

“There were different meetings throughout the fall with the CPN … and that was really helpful for me because in the past I’ve struggled with describing my research and making sure that I’m being held accountable to what I’m saying. Figuring out different ways to present my information and how it compares with my practice was really helpful,” Cabrillos continued. Columbia student Jessica Hannah was the other student chosen to participate in this year’s incubation period, and she also presented at IN>TIME.

The weekend kicked off with a free symposium on Friday, March 26 from 1 p.m. – 5:30 p.m. at the Chicago Cultural Center. IN>TIME artists and curators gathered together with special guests, including Sara Jane Bailes, Julie Laffin, Nick Lowe, Trevor Martin, Abina Manning, and Tricia Van Eck to discuss strategies for creating and sustaining a performance art practice.

Examining questions of how one keeps a performance practice alive and moving, as well as what a self-created performance practice looks like were among other important discussion topics during the symposium. Cabrillo’s piece explored this notion: “I want to see how different contexts can have a dialogue, and how my work can have a dialogue within these different contexts — how they can be mutually transformative.”

Hoping to reach out to individuals beyond just the performance community, Jeffrey anticipated a positive discussion, “What I love about being here in Chicago is that you feel like there are a lot of people working very hard with very few resources to make things happen. I like that about the school as well. There’s definitely an entrepreneurial spirit.”

The performances on March 27 from 6 p.m. – 9 p.m. — which included national performance artist Angela Ellsworth, and local performance group Every House has A Door — were not tied by a specific thematic framework, but rather, came together to stimulate and expose new and local performance work, as well as to introduce the Chicago community to national and international performance practices. “One of the things that I’m concerned with, as an artist and as a person in the world, is where is one’s attention? Where is our attention? I think that all the artists within IN>TIME are looking at that,” explained Jeffrey.

In response to the question of what audience members would come away with after seeing his piece, Cabrillos said, “I know this may sound like a cop-out, but I don’t really have a set package that I feel the audience is supposed to get out of it, per se. I don’t mean to say that I want people to take whatever they want from it, but I don’t feel as controlling about what that needs to look like. I like the proliferation of a vast field of responses.”

So how do viewers less familiar with performance art process what they’re seeing? Jeffrey said, “I always ask people to step back. It’s okay to not know what’s going on. Something may be happening that you’ve never seen before, or the artists may be framing something in the context of a performance that is familiar, but the way that they’re working with it becomes slightly awry.”

He continued, “In this constant state of updates, we tend to produce immediate responses. I like something where I’m having to process something over time, and it may not be something that I can respond to immediately. As a culture, we’re always hungry for the money shot.” 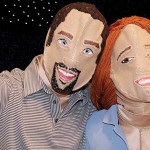