Four SAIC artists whose creative impulses propel them towards producing both sound and imagery.

By Brandon Kosters and Molly Shea

Music and visual art are like youth and acne, or Laurel and Hardy, or maybe even Cap’n Crunch and that roughed-up feeling on the roof of your mouth. For some, they are inseparable.
This is the first installment of Audiophiles. Every month, we will look at four different SAIC artists whose creative impulses propel them towards producing both sound and imagery. If you, or someone you care about at SAIC, is an audiophile, write to BrandonKosters@gmail.com and tell us about it. 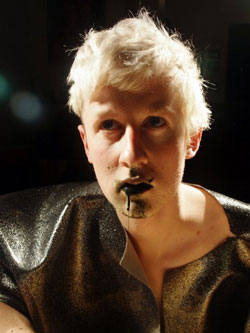 Photograph courtesy of Colin Self

Using a collection of small keyboards and synthesizers, Self began making recordings in his bedroom in Portland as a teenager. Over the years he has developed his love of music and performance art into flamboyant, gender-blending diva disco.
“I was raised in a very musical and artistic family,” Self said. “My sisters and I grew up playing instruments and reading music, so by my teen years, I had a lot of self-realization through playing music. Once I started going out to see shows in Portland, I came to understand that you could make really good pop music with minimal equipment. I discovered the politics of independent music scenes and lo-fi production, and really got going with that.”
Self’s practices as a musican and a performance artist are deeply intertwined. “It’s hard for me to imagine one without the other in my practice,” he said.
Self is highly influenced by feminine performers in the Pacific Northwest. “They made pop music embellished with feminist critique that you could really dance to,” he said. “Three specific girls, Susan Ploetz, Anna Huff, and Khaela Maricich, all taught me about combining spectacle with queer subjectivity.”
http://vimeo.com/user2378756 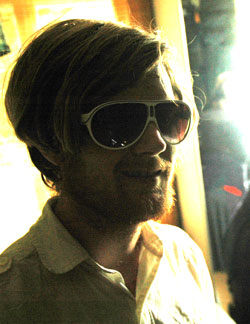 Henriksen, the Norwegian born undergraduate, is thankfully with us at SAIC once again after nearly being deported.

Having his passport stolen raised issues with immigration officials regarding what he refers to as his “trouble with the Norwegian police in 2007 after a violent emotional outburst with my closest friend in a taxi on a drunken Christmas night.” He found himself right in the middle of a struggle between “the personal and the political,” a recuring theme in his work.

Henriksen has been working for several years with the BorderClinic, a collective, that produces, performs and hosts live art and activism.

Aside from his ongoing band White Electric, and his Mp3’ing alter ego “The North,” Henriksen said that he is “dreaming of putting together a guerilla mourning choir. What that would imply is not easy to say at the present moment, other that it does follow the lines of border crossings and will address issues of “terrorism and the war on terror.”
[audio:https://images.fnewsmagazine.com/2010/03/swim.mp3] 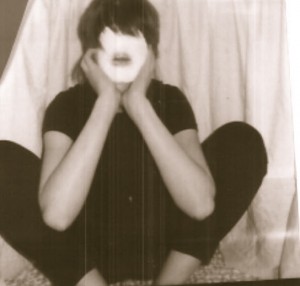 Photograph courtesy of the Jenna Caravello

This SAIC undergraduate and multimedia artist is very eclectic in her taste.

In addition to collecting instruments, Caravello has built a few ukuleles and some lyres (a stringed instrument common in Ancient Greece) and is also an accomplished vocalist. “In my songs I tend to leave out instruments altogether and just layer my voice because it’s the easiest thing to do,” she said.

Though she’s been playing autoharp and mandolin at shows with SAIC alum Patrick McGuan lately, she says that one day she’ll have “a loud band” in the vein of her favorite 90s rock groups that her father introduced her to, such as My Bloody Valentine, Pavement, and Slowdive. 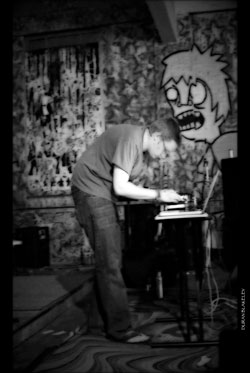 Evans is a sound/video artist and performer whose emphasis is in sound synthesis, electronic instrument creation and computer interfacing.

His work “commonly explores such themes as the combination of modern and obsolete technologies.” For example, Evans plays an electronically modified didgeridoo (a traditional Australian wind instrument). He explains that his intention is to experiment in combining didgeridoo with computer programming and sound synthesis. “I built a didgeridoo with externally mounted control modules that allow a performer to manipulate the sound of the didgeridoo in real-time,” he said.

Evans has also built synthesizers, performance-based computer interfaces and real-time audio/video instruments. He worked in video and film before becoming interested in sound. “The school greatly encouraged my decision to shift my focus,” he said.
[audio:https://images.fnewsmagazine.com/2010/03/kyle-evans-auto-matrix-excerpt.mp3] http://www.vimeo.com/8507332
http://www.youtube.com/user/yakthekyle
http://yaktronix.com/ 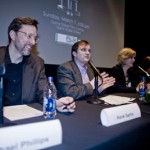 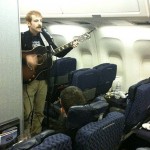