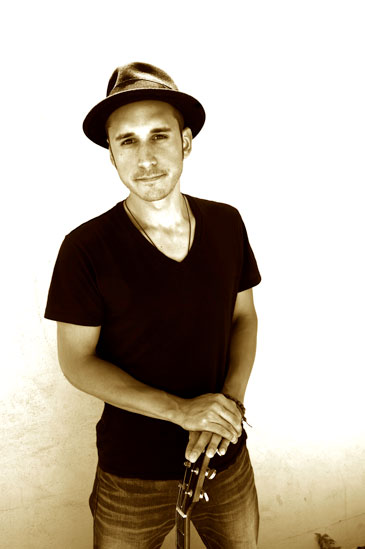 Brandon Kosters: You’ve got your EP coming out December 4. How long have you been working on this material?

Matthew Santos: Well this material has been a work in progress since last summer. It was meant to be released last November, actually, but it got pushed back due to political reasons. Finding out “what label is going to go under?” and all that jazz. So we finally got all our stuff together,

BK: What label is it going to be released under?

MS: My own label. I’m starting my own independent label.

BK: You went on the road while you were playing with Lupe Fiasco. You guys were opening up on this tour for Kanye West. what was it like going on the road with Kanye?

MS: It was a flashy, bangy, 30,000 people a night stadium crazy light show. It was intense. It was a very valuable experience for me cause I got to see the top of success. It was eye-opening, because I learned a lot about what I didn’t want to become as an artist. And set my goals in a more realistic light.

BK: Does this mean you want to play more intimate venues at a smaller scale?

MS: Well, yeah. There’s something to be said about the 30,000 person stadium . The energy can’t be compared to anything. There’s always something to be said about playing to a crowd of 50 or 75 and having that intimacy really…that quiet intimacy becomes part of the performance as well, and that makes for such a deeper experience…And with everything I’m doing now, with the label…I’m trying to focus on cultivating that intimacy.

I also learned a lot about energy. Using the energy to sort of feed the crowd, and have them feed the performance even more…

BK: So the reception with the 30,000 people a night. How was it?Where the crowds receptive to you?

MS: Yeah, absolutely! It was so loud, I couldn’t even hear myself singing at times…I never felt anything like it. We played festivals on the tour. Glastonburg in the UK was like 100,000 people…and Lollapalooza, we went on right before Rage Against the Machine, and that was like at least 70,000 people. So just an ocean of hands. Incredible.

BK: And you came out to Chicago for school?

MS: Yeah, generally. I went to Columbia College for music composition. Then [my career] started picking up.

BK: Who would you credit as your influences?

MS: Main influences would be Jeff Buckeley, some early Ben Harper, Bjork, Radiohead. The Frames are in there too somewhere. David Gray. There are so
many.

BK: If you could be anywhere five years time, geographically and in terms of your career, where would you be?

MS: I would love to be touring the world. I would love for my label to still be up and running, maybe have another artist or two signed under it. Have myself be sustained and succesful.

BK: I was hoping you could say a word or two about the name of the EP.

MS: The EP will be called The Stones Throw, sort of surrounding the notion that sometimes you get thrown a bone but other times, what’s thrown is a stone.*

Tickets for the preview party are $20, and includes a copy of Santos’ EP. For more information, visit www.lincolnhallchicago.com

One Response to Interview with musician Matthew Santos