Just before midnight on January 4, 2006, 50 year-old Isai Medina was walking his bike down the sidewalk near Western Avenue and Cortez when a drunk driver swerved and hit him. Medina, an avid participant in Chicago Critical Mass, was… 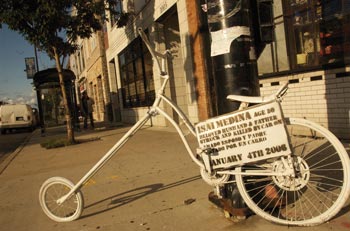 Just before midnight on January 4, 2006, 50 year-old Isai Medina was walking his bike down the sidewalk near Western Avenue and Cortez when a drunk driver swerved and hit him. Medina, an avid participant in Chicago Critical Mass, was known for his hand-built, flashy, custom bikes known as “choppers.” A one-of-a-kind, chopper-style ghost bike rests near the area where the accident occurred.

Ghost bikes covered in white paint and chained to street posts are quiet memorials that mark scenes of fatal bicycle accidents. Made of donated scrap bike parts and stripped of functioning material, ghost bikes in Chicago are built independently by family and friends of cyclists killed by cars or traffic accidents.

Chicago’s first ghost bike, for Medina, was installed during a January 2006 Critical Mass ride. In order to prevent the fresh coat of white paint from wearing off, the ghost bike was towed through the streets, behind another bicycle. Around 400 riders cycled in procession, stopping for a moment of silence at the scene of the accident to light candles and watch as the ghost bike was installed.

Ghost bikes do not represent every person that is killed in a bicycle accident; it is up to the family and friends of the victims to install a ghost bike. They shouldn’t discourage cyclists from the form of alternative transportation either- they are reminders to be safe, aware, and to share the road respectfully. 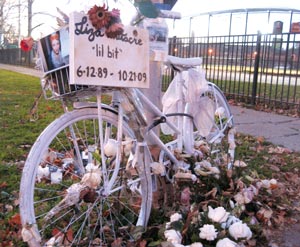 Since Medina’s death, the Chicago bike community now mostly installs ghost bikes during the Chicago Ride of Silence, a ten-mile ride that ends at the location of Isai Medina’s ghost bike. The ride is solemn. It echoes a funeral procession, honors slain cyclists, and raises awareness for cyclists and drivers.

“It’s estimated the number of cyclists on the road in the Chicago area has increased ten times in the last eight years, even more recently with [the increase in] gas prices. There are new laws to protect cyclists, but even with new legislation drivers are urged to use caution for their sake and the safety of others on the road,” according to Leah Hope on WLS-TV News.

Matthew Manger-Lynch, 29, came from a family of mountain bikers, and began road biking in Paris, France, where he lived for five years in order to attend culinary school.

The “Tour Da Chicago” Alleycat street race began in the early morning hours of February 2, 2008. When Manger-Lynch crossed the red-lighted intersection of Lincoln and Irving Park Avenues to pull ahead of a group of about 40 riders, that day’s race ended the Chicago Tribune reported. He was struck and killed by an SUV (that had a green light at the time) at 9:15 am. The popular race, a cyclist’s battle of speed and skill, has little regard for traffic laws. Manger-Lynch was a serious cyclist with intentions to participate in future official cycling competitions. 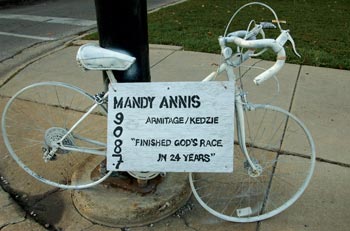 22-year-old Tyler Fabeck of Logan Square worked at the Chicago Apple Store as a visual merchandising manager and studied film and photography at Columbia College of Chicago. According to the Star Tribune, he was a Critical Mass participant and a dedicated cyclist. On April 20th of 2008 at about 1:15 a.m., Fabeck was struck and killed at the intersection of Western Avenue and Logan Boulevard.

Graphic designer Clinton Miceli’s bike was his primary mode of transportation. On June 9 of 2008, Miceli was killed on his bicycle when an SUV door suddenly opened in front of him, ejecting him into traffic. He was on his way home from work when the accident happened in the River North neighborhood at the 900 block of North La Salle Street.

Ryan Boudreau, 27, was a bike messenger for the city of Chicago. Boudreau raced through traffic, dealing with snarky drivers and pedestrians on a daily basis in order to make a living. He enjoyed every second of it. The Sun-Times reported that on August 13, 2007, Boudreau was on a personal errand, hustling to return to work around 3:15 p.m. when he was hit by an oncoming truck near the intersection of Clark and 18th Street.

Reverend Pavlo Hayda, 42, joined the priesthood in 1982 and attended St. Basil’s College Seminary in Stamford, Connecticut. In 1986, he received a master’s degree from the Catholic Theological Union in Hyde Park. He was ordained at St. George Cathedral, Ukraine in 1992. He was the priest at St. Joseph’s Ukrainian Byzantine Catholic Church in Des Plaines, IL and became the pastor in July of 2005. Hayda was hit by an SUV that was exiting the driveway of an apartment complex at the 1900 block of East Oak Street in Des Plaines on September 4, 2007.

At the intersection of Diversey and Pulaski Avenue on June 26, 2006, George Chavez, 42, was killed in a hit-and-run accident.

Wicker Park resident Alicia Frantz had “a finely tuned sensitivity to the beauty and music most of us hear and ignore every day,” according to her memorial on the ghostbikes.org website. She began archiving every-day sounds in 2002. Frantz fell under the wheels of a truck on Division Street near the Kennedy Expressway, on the day of her 32nd birthday, June 6, 2005 .

A cyclist named Chris was struck at the 4600 block of West Madison Street on January 28, 2006. His family and friends requested that only his first name be used in the memorial.

Liza Whitacre, 20, was as passionate about coffee and French as she was about life. The Loyola University junior had been an employee and official trainer at Chicago’s Metropolis Coffee. On October 21, 2009, as she rode with her roommate south on Damen Avenue at Wellington, she attempted to bike between a CTA bus and a truck as the intersection’s light turned green. Whitacre fell from her bike, landing underneath the truck, unbeknownst to the truck’s driver.

Logan Square resident Blanca Ocasio, 19, was a sophomore at Northeastern University who was interested in becoming a pharmacist. She was riding her bike eastbound on Armitage around 4 p.m. when she was struck by a garbage truck driving in the same direction, according to WLS-TV News. This past September marked the two-year anniversary of her death. Colorful flowers and small stuffed animals adorn the child-sized ghost bike that memorializes the crash site at the intersection of Armitage and Kedzie Avenues.

Mandy Annis, 24, another Logan Square resident, was a fifth grade teacher at Chicago’s Humbolt Community Christian School. She moved to Chicago from Romania, where she spent most of her childhood, to attend Moody Bible Institute. She sold her car when she realized that she could bike everywhere. Annis was riding west on Armitage Avenue when she was hit by a car and killed on May 2, 2008, at the same intersection as Ocasio (although her ghost bike was moved a block east to the intersection of Armitage and Humbolt, out of respect for Ocasio’s ghost bike installed later that year). According to the Chicago Tribune, Annis’s boyfriend was about to propose to her that weekend.

For more information check out bikechicago.info/ghostbikes. 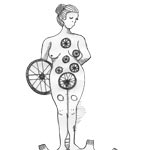