…Daniel Quiles and Kymberly Pinder took a group of students to see two significant artworks in Detroit: Diego Rivera’s mural Detroit Industry in the Detroit Institute of Arts, and The Heidelberg Project by Tyree Guyton…

Text and photos by Brandon Kosters

Daniel Quiles, who teaches the course “Latin America: The Last Avant Garde” said, “My initial impulse for going to see [“Detroit Institute”] the [Diego] Rivera murals was as part of a course that I am currently teaching on avant-garde art in Latin America. The Mexican muralists felt that the answer to the question of how to merge art and life would be to create a publicly-situated art with clear messages.”

“This happened to coincide with the interests of a class that Kymberly Pinder was teaching [“The History of Mural Painting”]; she knew about the Heidelberg Project [by Tyree Guyton]. In retrospect I think the two works go quite nicely together in a whistle-stop jaunt through Detroit, as testimonies to the optimism of our past and the daunting challenges of our present.”

Produced 1932-33, Diego Rivera’s Detroit Industry consists of twenty seven frescoes paintings that fill the walls of the inner court of the Detroit Institute of the Arts. Workers in the auto industry are depicted working in the factory for The Ford Motor Company. The workers toil while bourgeois citizens are depicted spectating their activity from a safe distance. The upper panels of the mural feature references to religion and technology.

Quiles said, “The key difference between Rivera and Guyton is the whole structuring condition of the commission. Rivera comes to Detroit and can only execute his work with the permission of the ruling elite of the city, industrialists like Henry Ford, and the director of the Detroit Institute of Arts, William Valentiner, who are pictured together in the bottom right of one of the largest murals.”

“Guyton Represents the diametric opposite of this situation,” Quiles said. “His work is borne of the post-industrial moment and its abandonment of vast urban spaces and populations. Here we must consider the fact that the city of Detroit has partially demolished the work twice and has not ruled out doing so again in the future.”

Pinder said, “A link that can be made [between the two works] would be that both are types of public art that addresses the theme of labor and a disenfranchised sector of society. The Heidelberg Project is an expression of this sector taking back their autonomy and creating something out of nothing to stand as a very visible symbol of perseverance and the power of art making.” 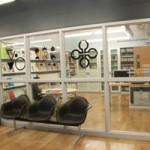 A View To Learn 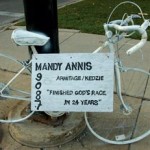