Rob Divito has found a way to balance economics and creativity 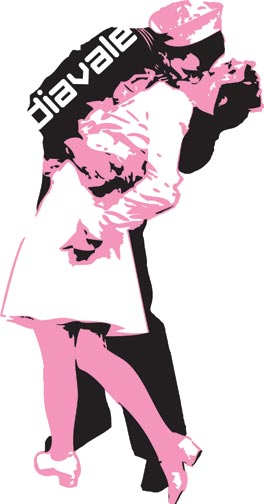 Artists can find it difficult to balance economics and creativity, but Rob Divito, who runs two businesses with his older brother, Anthony, may have found a way.

“You have to not give a shit what other people think, but that’s the hardest part, when you want your art to be marketable,” says Rob.

His artistic freedom is not independent of what the customer wants. “Some people think that you have to wear a suit and tie to make any money,” he says. “I’ll sacrifice the money in order to do what I want with my life.” However, he does have expectations. To him, “starving artists” is just a cliché.

Together Rob and Anthony make up Diamond Avenue Graphics and Diavale, a clothing line that features Rob’s limited screen-prints and apparel. “DAG is our main source of income,” Rob says. “The printing business opens up opportunities for Diavale.” DAG prints on a customer-need basis. In addition to t-shirts they can print just about anything—stickers to vinyl car wraps. The customer provides the designs or they can leave it up to Rob, but it’s going to cost them. “I’m an expensive kid.”

When it comes to Diavale, he is his own boss. Rob says the city is a source of inspiration, but he says his creative side comes at night. “That is when my brain functions the best.”

He makes about 15 t-shirts for each design.“I want the shirt to be limited and done right. I didn’t want to walk down the street and see the same shirt on someone else. I hate that.” This also gives him more time to come up with new designs. The stock is always changing. That’s what keeps ´em coming,” he says.

Diamond Avenue Graphics is based in Naperville and is currently run from Anthony Divito’s home, but the brothers bought an industrial space nearby to fit their ever-growing collection of equipment.

“My brother searches Craigslist everyday, all day, in every state,” Rob says. The brothers drove to Wisconsin for a shirt dryer and a free printing press. Anthony also found a film printer in Minnesota at a business closeout sale.

“All of our equipment is old school, heavy-duty, block steel,” Rob says. Anthony asked a friend living in Minnesota if he would bring the film printer down to Chicago in his truck. The cost: a case of beer.

Anthony quit his job at a private equity firm downtown to work with his brother. “Initially, it was a nominal cost to invest in his idea. As it grew, I started to believe there was potential to build two successful enterprises.” Rob is glad that Antony works the financial aspects of the companies while he sticks to the creative side of things.

“We understand our differences and are able to work with them,” Anthony says. “I also saw it as a way to venture into a new industry. I gave up a lot to do this, but I have always believed that I can accomplish any goals I set for myself.”

In 2006, Rob attended SAIC as an undergraduate pursuing a degree in Graphic Design, but he was never a great student. “I think I started drawing because I didn’t want to do school work. I would just doodle.”

At SAIC he says he was ahead of the class, but that did not exempt him from taking prerequisite courses. He began to question if continuing at SAIC was right for him.

“I gave him the same advice I give everyone,” Anthony says. “Figure out what you believe is the best path to take.” Rob chose to discontinue his studies. His new goal was to pursue his art full-time. Anthony supported his decision. He offered Rob $10,000 to start his own business if he could be co-owner. They shook hands and haven’t looked back.

When Rob sees his designs walking down the street he says, “Its one of the better feelings in life.” 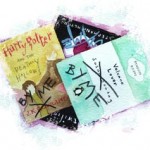 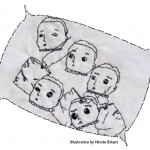 Stop working, go to bed and sleep for eight...