“Cutting the emulsion of the photograph is always something that I’ve found rather traumatic,” said British artist John Stezaker. “It’s something I’d like to get over very quickly, because—in a way—it’s very much like cutting the surface of the eye.” … 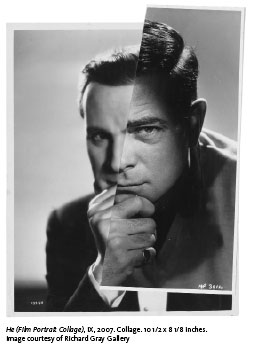 “Cutting the emulsion of the photograph is always something that I’ve found rather traumatic,” said British artist John Stezaker. “It’s something I’d like to get over very quickly, because—in a way—it’s very much like cutting the surface of the eye.”

Ironically, cutting and incising is the leading process defining Stezaker’s work as a photocollagist and a leading figure of the British Conceptual Art group.
On September 9, Stezaker gave a public lecture and a brief view of his oeuvre at the School of the Art Institute of Chicago’s Columbus Auditorium. This lecture event initiated the commencement of the 2009-2010 Parlor Room visiting artist/curator’s lecture series hosted by the SAIC Photography Department. It also preceded the opening of his first exhibition in Chicago at the Richard Gray Gallery on September 11.

Stezaker’s self-titled exhibition at the Richard Gray Gallery includes 18 of his recent photocollages. Combining found images—such as vintage photographs, old Hollywood film stills, and travel postcards—Stezaker described that by working with such an immense collection of vintage images he has positioned himself as a consumer rather then a creator of images.

In Blind III (2006), two anonymous men stand outside of a house, one extending an arm towards the other. The image is likely one pulled from a film; it is instantly narrative and ambiguous, potent in its suggestion, yet absence of referents. But to contemplate the setting and the characters, the viewer must overlook the most striking feature. Spanning from the top left corner of the photographs frame to the back of one of the men’s eye is a harsh white triangle disrupting part of the photograph. It appears as a bright light, either coming from the man’s eye, like some superman laser eye beam power—or reaching down from the heavens to blind the man’s eyes out, like a misdirected Byzantine image of the stigmata. Stezaker’s precision and careful treatment
of materials reveals that both interpretations are flawed though. The triangle has been sliced away from the photograph’s substance. The white of the paper behind the photograph provides the impression of light. Stezaker described alterations such as this as “interrupting the images’ legibility.”

Four collages from his He/She series are included in the Richard Gray exhibition. Each of these collages includes two different actors’ or actresses’ faces cut and “fused” together to create a new profile and “pictorial trompe.” Also included is one work from his Marriage series that combines the face of a man and a woman into one profile. As features line up wisely or are left fractured and disfigured, the results of these pictorial fusions are at times doubly handsome, at others schizophrenic, and in a few nearly grotesque. The series also seems to initiate readings surrounding gender theories and the construction of identities, both as original images constructed for films and as revisited imagery selected by Stezaker.

By working with the material of vintage photographs, Stezaker accentuates the raw edges of the photographs in ways that would be difficult to simulate digitally. The direct process emphasizes the intervention of his own hand into the works. In this way, the actions integral in his process become a subject of the photographs as well. He described this inclusion as “a kind of inscription of my presence, within the realm of choice.” John Stezaker at Richard Gray Gallery, October 24, Monday through Friday, 10:00 a.m. – 5:30 p.m., Saturdays. 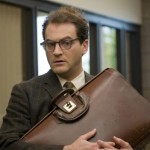 SAIC Chapter of IDSA Up and Running