Tiffany Holmes wants you to think about renewable energy. She has built a career out of creating interactive artwork, and through her classes at SAIC she encourages interventions into traditional methods of cohabitating with our environment. 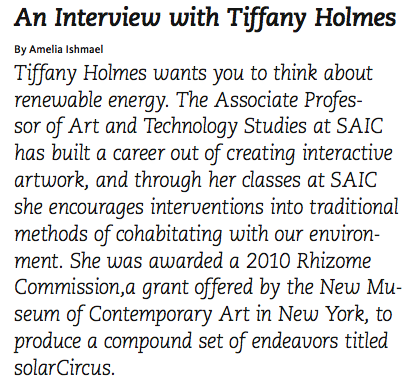 Amelia Ishmael: What is the solarCircus project?

Tiffany Holmes: solarCircus is not one project, but it’s really a constellation of three or four platforms of which to work. The aim of the solarCircus project is to create a kind of fun, informative venue for people to initiate a dialogue about the potentials of solar energy. So, with that aim in mind, solarCircus could be a participatory workshop where 14 to 15 people sit down with a solar toy kit, put the kit together and then hack it to create a series of one of a kind solar sculptures. …solarCircus is also a stand-alone sculpture that could be deployed in a public space, such as a lawn or patio, where I set up a constellation of anywhere between 15 and 40 small sculptures that together suggest what a city of the future might look like that ran on renewable energy entirely. And then finally, the solarCircus project also encompasses a series of performances that I am broadcasting on the web. Right now we really are only on the test phase where we have a stage on which performers—meaning myself and some assistants holding umbrellas— enable these solar powered characters to interact on the stages based on their sort of limited abilities to move and twitch and move through space using power generated by the sun.

AI: Where can we find these performances online?

AI: How is the Rhizome Commission award going to help you advance this project?

TH: The great thing about the Rhizome Commission is that I immediately got a decent amount of funding to buy supplies, purchase umbrellas, and—most importantly—purchase a small polycarbonate dome. I have been approached by a few museums that are interested in displaying solarCircus for a period of time between three and five months, so I need a way to protect the small solar sculptures from the elements. The polycarbonate dome is currently being tested in my backyard to see if it will hold up and allow the sculptures to work, but also protect them from the elements.

AI: What are the some of the major things that you’re excited to test out that you weren’t able to before you were granted the commission?

TH: Well, the primary thing is that I was able to purchase a ton of kits. I purchased every single solar toy kit there is available online: everything from the “Peppy Orangutan Kit,” to the “Attacking Solar Inch Worm Kit,” to the “Solar Robot Kit.” … My interest, especially in the workshops, is giving people these relatively easy kits to assemble, but then allowing time to disassemble them, and use the parts in some more original form of construction. The Rhizome Commission has really enabled another workshop scheduled for [next] spring, and another for [next] fall.

AI: Do you think that there will be equal parts of the process and workshop aspect of solarCircus as there will be on a type of large performative piece?

TH: I often do workshops as part of my practice because they actually inform my own construction of some of the solar elements. I learn a lot from my students. That’s one of the great things about teaching at SAIC, is that when I’m running a classroom, especially in the media arts, there are a number of individuals who bring proficiency in a whole number of skills. It’s really a hands-on, sharing, learning classroom where I may be presenting a do-it-yourself workshop in solar sculptures, but there might be an engineer in the room who really has a great idea on how to use a pinion gear to do something else rather then what it was featured for. I love all of those surprises that come up in the workshops.
The workshops sort of fuel interest in the project and enable people, who are maybe not installation artists, to kind of get a sense of what that practice is about.
I see the big project, the sort of culminating project, as a sculpture sitting under a dome that would be in a public space for anywhere between one to five months in the summertime.… One of the interesting things about the project is that the sculptures only become kinetic when there is sunlight. I’m going to have a couple of elements that work on solar powered batteries—so that there would be lights on the sculptures at night hitting the dome. But those lights would only be on while the battery is charged… so it would vary each night depending on what kind of weather had happened that day. And I am very intrigued by the fact that, aesthetically, I think that the dome sculpture would be interesting to look at in a static mode—in early morning, late afternoon, dusk, twilight, time. But it would be a huge surprise, I think, for people walking by it, if they walk by it at the moment where the sun hits it, or the moment when the clouds move and direct sun hits the dome. The thing really comes alive and there is a really beautiful sonic element with all of the clicking and clacking and spinning of the toys that I very much want to be part of this sort of unique visual and auditory surprise.

AI: Do you think that the workshops fuel the dialogue about how our society relates to ecological issues?

TH: Definitely. I feel that the great thing about the workshop format is that I have a captive audience of 15 for three hours and that really enables me to establish the kind of dialogue I want about where we are going with renewable energy in this country, what kinds of examples can we look to in the world and what you can do at home to reduce your own ecological footprint to some extent. I find the workshops are really great at enabling a not extremely in-your-face kind of way to establishing a dialogue about those sorts of issues. You can imagine everybody’s got their solar stuff everywhere, and they’re working… but conversation naturally happens over the worktable. 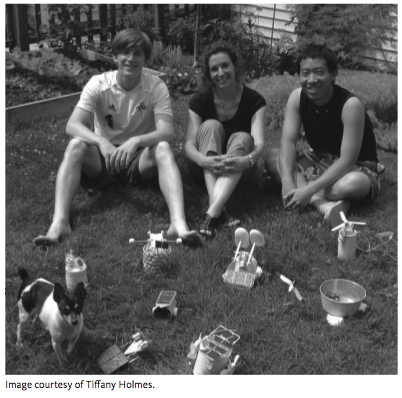 AI: In re-appropriating and recycling electronics, and the open-source nature of your projects, there seems to be a social activist agenda throughout your work. Would you agree?

TH: I would say that most of my work, the primary goal—which definitely has a social agenda—is to build creative projects that help establish a dialogue with viewers about environmental issues….
Going back to this other question of open-ness… there is a huge tradition and practice among media artists to make your practice transparent, to make your code transparent. This is all part of what I would call the “open-source movement.” I am a big fan of the DIY website instuctables.com where I have taught myself, for example, how to solder together a series of recycled solar cells. And that is an activity that I am going to directly put into my new Fall 2010 class “DIY Ecotech: Using Art and Design to Promote Sustainability.” That’s something that’s probably not on the books yet, but it’s something that I’m hoping to teach in the fall.

AI: There seems to be a bow to Alexander Calder’s Circus project within solarCircus. Are there other additional notable influences that you hope to reference with this project?

TH: I picked the title solarCircus as an homage to Calder’s Circus projects. If you look at those videos [on YouTube.com], one of the most exciting things to see is his ability to create whimsical, tension-filled performances with virtually nothing: with recycled coat hangers and other kinds of scrap… and this was in the 20s. I love the complexity that he was able to generate out of very simple media, and that’s the primary influence on this work.… What I’m doing [with solarCircus] is staging a dramatic performance using very simple variables: sunlight, or no sunlight, through the shifting of an umbrella. Calder is a springing off… but I would say that art historians, like Grant Kester, who talk of dialogical practice are also something that very much influences this work—because the main goal is to open a conversation with viewers about the potentials for solar energy. If you imagine strolling down Michigan Avenue and seeing 40-some whirring, spinning, solar powered orangutans or monkeys spinning around, it’s going to cause you to at least slow down your pace. And that’s the point that I hope to engage and get people interested in

AI: Because you are having workshops teaching people how to create solar sculptures, are you hoping to inspire a movement of people creating these types of toys and hacks on their own? There seems to be this sort of graffiti aspect to how small and self contained [the hacked toys], that you could just free them…like all over Millennium Park.

TH: I don’t know if I would use the term “urban graffiti.” I see the project of having much more of an interventionist bent…meaning that people who walk the same path to go to lunch everyday might one day find the sidewalk covered with 300 solar powered orangutans. I think that would be hilarious and really get at the point that I want to make in a sort of humorous fashion—that is also in your face—that talks about “what are you doing about the potentials for solar energy?” and “why don’t you consider it today on your way to lunch?”

Eat this, Don't eat that