Beth Capper, a graduate student at SAIC who programmed this screening, said “We thought a good way of piggybacking the audiences for both would be to have the UGFVF on the first day of CUFF. We hope that students who attend the fest will stay on for the CUFF screenings and that some of CUFF’s audience will come a little earlier in the day to see the UGFVF program.” 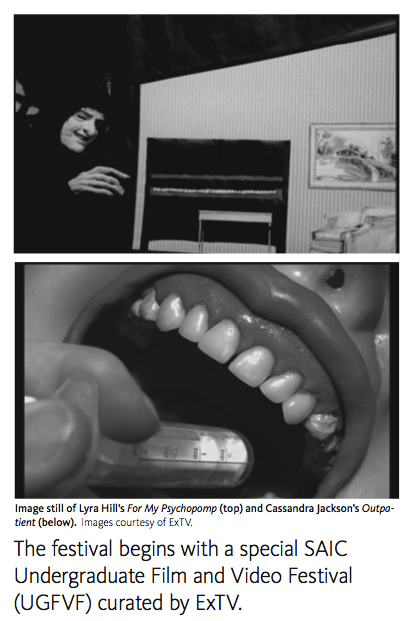 This showcasing of student work will differ from screenings held previously. “I think the fact that it is at the Siskel has meant that we’ve had to be more selective this year than previous years,” Capper said. “We have a smaller slot of time so we’ve really had to be strict with submissions.”

“I watch everything that gets submitted and make my decisions after watching all of it,” Capper went on to say. “Generally, I am looking for works that show promise as well as just really great works. This year I would say we got a real mixture of work—some of it really stands out and shows the makers to be quite ahead of their peers… others show promise as students build their artistic practice.”

The Undergraduate Film and Video Festival was started by SAIC alumnus Kali Heitholt. “I started the UGFVF because I went to a screening of student work at Columbia College and was extremely jealous of what I was seeing,” Heiholt said. “Studying film at SAIC I never really had an opportunity to screen my work. It didn’t fit in a gallery or in the curated shows around school. I went and talked to a few people about screening opportunities at SAIC and at the time there was just the Eye & Ear Clinic (a grad student group), Conversations at the Edge (not really for student work) and ExTV.”

Eager to show her work before the BFA/MFA screening, Heitholt “got together with Lori Felker (student media coordinator) and Craig Downs (director of media services) and we discussed how we could create a way to allow students working in time arts exhibit to finally screen/exhibit their work. So we created the UGFVF and latched it on to ExTV, by the second festival, when I became ExTV Outreach Coordinator, and ExTV has vowed to continue the festival.”

Among the works to look out for at UGFVF are Cassandra Jackson’s Outpatient, Emily Wang’s Kazi Kazi and Lyra Hill’s For My Pyschopomp.
Jackson’s piece is a multimedia animation that incorporates pixilation and puppet animation. It replicates the experience one has at a dentist’s office and undergoing surgery. Jackson is highly successful at exploiting the charm that is exclusive to the medium of animation while handling a discomforting subject.

Wang’s work is an exploration of the parallels between fiber and memory. Animated with footage shot in real time and accompanied by a narration about her childhood, the piece is a self-contained gem that manages to be introspective and deeply personal without feeling like nostalgic sentimentality.

Hill’s For My Pyschopomp evokes the likes of F.W. Murnau and Robert Wiene with a more contemporary sensibility. Shot in super 8 and 16mm film, the piece offers a beautiful marriage of sound and imagery that is thought provoking, if not abysmal. Hill has woven pieces of her writing, sets she designed and performance into her own lush and sometimes disturbing narrative.

Bryan Wendorf, programmer and artistic director of CUFF, says that the festival “exists to showcase the defiantly independent filmmaker. Our mission is to promote films and videos that dissent radically in form, technique or content from the ‘indie’ mainstream, and to present adventurous works that challenge and transcend commercial and audience expectation.”

The festival boasts quite an impressive roster, including such works as Deliver, Nice Bombs and the documentary The Weather Underground, which was nominated for an Academy Award.

What else can we expect from ExTv this year? “I am introducing online exhibitions this coming semester,” Capper said. “Also, we are working on the ExTV archive, which will be made available to the students to view. It goes back to 1997 or so, I think. There is also our DVD exchange program where we send a curated DVD of work out to other schools in return for their work, as well as our regular programming on CAN TV.”

Capper is confident that for many of the artists whose work is being shown, these shorts could be evidence of good things to come. She said, “For a class last semester I programmed a show of first films which included films and videos by Jem Cohen, Miranda July and Stan Brakhage… and it was amazing to see how brilliant these filmmakers’ first films were. I think early explorations with creating in a particular medium can yield unique results actually, and who knows where some of these film and video makers will be in ten years… perhaps they will be our generation of Brakhages or Miranda July’s.”

In addition to being Outreach Coordinator for ExTV, Beth Capper is Art Criticism Editor for F Newsmagazine.