“Olafur Eliasson: Take Your Time” at the Museum of Contemporary Art

By Emily Baumann May 1, 2009 Uncategorized

Last June, while visiting my family in New York City, I took the opportunity to see the massive exhibition of Olafur Eliasson’s work, spread out between MoMA and its Queens corollary, the P.S.1 Center for Contemporary Art. While strolling through the galleries in Long Island City, I happened upon a friendly Chicago face: the MCA’s curator Tricia Van Eck. The two of us excitedly talked about the impressiveness of the artist’s work and how fantastic it was that this exhibition was going to be  coming to Chicago.

Well, that time has come. After a stop in Dallas and another in San Francisco, the exhibition has finally come to land in Chicago. From May 1 through September 13, “Olafur Eliasson: Take Your Time” will be on display at the MCA. This breathtaking installation work by the Danish-Icelandic artist, of eerily beautiful environments reminiscent of his Scandinavian homeland, will bring a breath of fresh air to the stifling heat of this coming summer in the city.

A master at recreating phenomenological experience, Eliasson’s art makes the gallery space into a natural terrain filled with light, color, atmosphere and wonder. Viewers of his work surrender their spectatorly role for an immersive one, in a world where water and hosing create rainbows in dark rooms, moss grows wild upon whitewashed plaster walls and a whirring fan face swings teasingly and threateningly from a string hooked to a high ceiling, propelled by only its own centripetal force. The mechanics of his practice are always straightforwardly presented—honestly displaying their own instruments as they dishonestly recreate the aura of the natural world. Spotlights, motors, screens, monitors and armatures lie exposed within the glowing spaces one enters to become encased in phantasms of climate and ambiance, as in 360˚ room for all colours (2002), where you see the constructed round pavilion of white screens with matte backing, held up by metal brackets, but experience the temporal flow from glowing yellows and oranges to penetrating amethysts, emeralds and azures of the aurora borealis that emanate from the fluorescent lights and projection foil within the walls.

I was able to pick up my conversation with Van Eck again recently, concerning the contrasts and parallels between the work of Eliasson and of Buckminster Fuller—simultaneously on display in the upstairs galleries. Both trippy, eco-interested and brilliant, Eliasson and Fuller use geometry,  nature and industrial materials to create spaces and forms that are outside of our societal expectations, yet intrinsically familiar to the natural world that we sometimes feel so separated from. “I think they share a similar appreciation in desiring to understand and depict, in both simple and grandly complex ways, the inherent operating principles of the natural world,” said Van Eck. “Each of their model rooms illustrate this because they help them to understand and engage with these systems and principles.

However Fuller’s models delve more into the principles of engineering, while Eliasson’s seem to delve more into phenomenology and subjective perception to discover how one perceives, sees, and comprehends light and space.”

While Eliasson’s work can sometimes be more disturbing than awe-inspiring—walking through a hall lit in a blinding yellow that makes everyone around you look like they came from beyond the grave, is neither pleasant nor particularly enlightening—they all make you aware of how you encounter space and the materials of your everyday. Even when broken down to their most functional and undignified forms, Eliasson makes the basic appliances we rely on reveal their mystical potentials.

While I don’t know how the work will be installed in the odd first floor galleries of the MCA—since they rely on the space they inhabit as much as they transform that space—and I have seen his projects fail (the waterfalls in New York City’s rivers this past summer were humorously disappointing), I can feel pretty confident that the MCA’s version of “Take Your Time” will be an exhibition worth seeing. Eliasson’s world has the chance to change your world, so why not try?

Uncategorized Atmosphere is in the air
« Previous Story 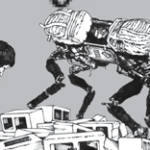