F Newsmagazine sits down with John Kricfalusi, creator of “Ren and Stimpy” and founder of Spumco.

Creator of “Ren and Stimpy” and founder of Spumco

Brandon Kosters: The acting in your animated films clearly references iconic film actors from older Hollywood films. I am wondering if you can tell me about some of the exercises you’ve had Spumco artists do to replicate facial and gestural actions of famous actors?

John Kricfalusi: Well, first of all cartoon characters have much simpler faces than real people. Most animation uses very simplified expressions of broad general emotions. Happy, sad, mad, surprised, etc. But real humans and good actors are capable of much more intricate and layered emotions that they portray with their facial expressions and gestures.

One exercise we did was to draw Elmer Fudd making actual human expressions. We would freeze frame Kirk Douglas, Robert Ryan, Jackie Gleason and others and try to capture their expressions and wrap them around Elmer’s head shape. This is not an easy task!

I think of every character as a totally different being; each with his or her own ways of expressing themselves visually. I don’t analyze any of my characters, I just feel them as I draw them. George Liquor doesn’t make the same sorts of expressions as Ren, and Ren doesn’t behave like Stimpy.

They each have an infinite amount of individual expressions and poses that are dictated by the story, mood and scene. This is a very different approach than most cartoons where a handful of preset expressions are drawn on the model sheets and you can never vary them.

I draw some expressions that are sort of “realistic” – very specific, but also some that are purely cartoony or impossible, and many that are in between the 2 extremes. I believe in using a wide palette.

BK: Disney’s “The Frog Princess” will be the studios first film with an African-American protagonist since “Song of the South.” This will also be the first hand drawn animation from Disney in some time.

JK:Except the characters don’t look remotely black. I’m sure they won’t act it either. They are just stock Disney characters painted slightly darker, but no different in design than Belle or the Little Mermaid.

BK: My mind goes straight to a film like Bob Clampett’s “Coal Black and de Sebben Dwarfs”, a sophisticated film artistically, however offensive it’s content may be to a contemporary audience.

It seems that ultimately animated films serve as fascinating historical documents. Is there any value in preventing works like this from being seen today?

JK: I can’t see any value in not showing one of the best cartoons ever made. They show Gone With The Wind and many other classic live action films that have what are now assumed to be “offensive” stereotypes, but won’t show the cartoons from the same period. We are too politically correct.

BK: How long after your work with Ralph Bakshi did you form Spumco?

BK: How do you feel about computer driven animation?

JK: I think it has potential. It’s been mostly pretty boring and robotic so far. It doesn’t seem worth the cost and effort, when it is so much faster and easier to just draw what you can imagine, but maybe someday it will get more artist-friendly.

BK: One of the things that made the first two seasons of “Ren and Stimpy” so great was the fact that you pushed it as far as anyone conceivably could on a major children’s network. How did you feel about working on the “Adult Party Cartoons”, where you were basically given license to be as crass as you wanted?

JK: I wasn’t “given license”, I was kind of forced to. I just wanted to make it the way I always did. The stories even came from the first 2 seasons of the show, but we added stuff hat the executives thought would be more like South Park. There are a few scenes that I would take out if I had my own way. And I never try to be merely “crass” – certainly no where near as crass as modern prime time cartoons.

BK: How do you think the animation industry today differs from the industry when you first entered into it? What advice do you have for students and novices entering into the business?

JK: It differs on the surface. The styles are more flat today, less “realistic” than the 80s. It’s still not run creatively by artists, although there was a short period in the early 90s where we had a lot more creative say in the cartoons we made. Now they are mostly executive-driven and formulaic.

My advice to everyone is to learn to draw as well as you can and don’t get caught up in “style”. The more skill you have, the more creative choices you can make. Everyone thinks they have a magical unique style, but in reality, most artists don’t. There is a lot of cloning in our business.

BK: Do you remember the moment when you realized that, stylistically, you were being emulated by many other studios?

JK: Yeah, the very next cartoons that came out after Ren and Stimpy- even at the studios who had turned down Ren and Stimpy when I pitched it to them. Actually even before that, some studios were copying what we did on Bakshi’s Mighty mouse.

BK: Is the “Mighty Mouse” series you directed under Ralph Bakshi going to be available for DVD any time soon?

BK: What projects are you currently working on?

JK: George Liquor and some cartoons for my own Youtube Network.

BK: Going to a fine art school, there are still some people who insist on making the distinction between “high art” and “low art”. Similarly, in animation, it seems like there are many who wish to make the distinction between studio animators and independent animators. Is this decision necessary, and wouldn’t an artist be putting themselves in a disadvantaged position if they didn’t embrace both sensibilities?

JK: Well I admire high skill and creativity no matter what the medium. Does “fine art” even mean anything anymore? And I never heard of “high art”. Tell me what it is so I can make fun of it. If fine art means diving into a vat of elephant dung and rolling around on a canvas then you can have it. I’ll take [Bob Clampett’s] “The Great Piggy Bank Robbery”. 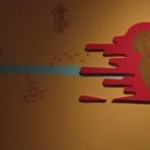 One Response to 10 Questions with John Kricfalusi