Eric Garcia’s recent mixed media installation at LG Space, “Cultural Conflicts,” showed that his satirical caricatures lend themselves not only to cartoons, but to fine art as well.

As part of a team of talented political cartoonists at the School of the Art Institute of Chicago, readers of F Newsmagazine will instantly recognize Eric J. Garcia’s work. His signature style and sharp critiques of American politics have earned him recognition and awards. Garcia’s recent mixed media installation at LG Space, “Cultural Conflicts,” showed that his satirical caricatures lend themselves not only to cartoons, but to fine art as well.

The installation seamlessly wove together images of Aztec ritual sacrifice, Spanish conquest, the rise of the Mexican state, and American imperialism in the Middle East and Latin America. “This show,” Garcia explained at a SUGs discussion panel in Late February, “is the culmination of about a year and a half of work. I was trying to organize them all into some kind of cohesive body. I was trying to figure out how to connect them all into the network of one show. So I came up with the idea of a timeline, this ribbon that runs around the gallery space.”

Bands of different colors ran between the displayed images, representing different political eras in Mexican and American history. The timeline took viewers on a journey between three different empires and occupations: the Aztecs and their subjugation of the other natives, the Spanish conquistadors, and America’s war with Mexico and the current conflict in Iraq. “[The pieces are] also placed as some kind of historical reference.  Mexico went on to conquer the Native Americans, and it goes all the way to the United States in the present day. It almost comes full circle in the idea of colonization and conquest. They all have to do with some kind of military aspect. Even the indigenous people were conquering other indigenous groups.” He described the theme of the work as “an unbroken chain of conquest and colonization.”

The work itself communicated Garcia’s intent well, using bold colors and his signature style of illustration in a variety of media to depict Aztec sacrifice, the horrors committed during Spanish colonization, the massacre that occurred at the Alamo and the current atrocities in Iraq. In a particularly powerful image that seemed to tie together the different periods and themes of the installation, we see depicted the Mexican-American “G.I. Jose: always treated like an foreigner, until we need you to kill other foreigners.”

“[One] of the challenges I’ve been dealing with is that I want to tell a story,” Garcia said. “I want people to come in here and be able to understand it. But I also want to make it interesting for an art critic to look at. It’s a balancing act.” Garcia’s art might just be the perfect vehicle for the story he wants to tell. The art is reminiscent of graphic novels or comic strips, even when using media and approaches more traditionally associated with the “fine art” world, which has often had a difficult time accepting cartoons and comics as legitimate art forms. It lends a distinctive aura to the installation, making it seem less of an impersonal exhibit and more of an narrative, a story inviting the viewer to explore and participate. 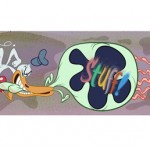