Is a movement toward a less puritanical America on its way? Fashion designers seem to think so as evidenced by the sheer fabrics that were all the rage in New York during Spring 2009 Fashion Week.

Is a movement toward a less puritanical America on its way? Fashion designers seem to think so. Sheer fabrics were all the rage at New York fashion shows during Spring 2009 Fashion Week. An unusual and unprecedented number of models stomped the catwalk in see-through tops, exposing their breasts to hundreds of shutterbugs.

Can designers be sensing a cultural shift? Historically, fashion has always reflected the times. In the 1920’s, as the flapper style became popular, Victorian and Edwardian sensibilities were cast away, life came at a faster pace, and jazz influenced silhouettes captivated the youth. As women were “liberated” from their corsets, cut off their hair, and wore shorter dresses the Nineteenth Amendment was passed, which finally gave women the right to vote.

Women’s dress was practical and utilitarian during the Second World War, when women were asked to enter the work force and fill in for men over seas. As Rosie the Riveter announced “We Can Do It,” garments echoed the sentiment with stronger silhouettes that emphasized the shoulders and shortened hemlines.

After the war, when American society asked women to leave those jobs and return to the home, Christian Dior and many others designers introduced the “New Look” of 1947. That look, what we now think of as the “housewife” image of the 1950s, included cinched waists, curved shoulders, and impractically heavy, long skirts sewn with yards upon yards of fabric.

Over the next decade, hemlines shot up, coinciding with an extremely liberal and free thinking era for America. The Hippies had their own distinct fashion for both men and women, reflecting the music and experimentation of the times. Later, the 70’s and 80’s was a time of power dressing, reflecting women joining the workforce in large numbers. In the 90’s men’s wardrobes diversified on a large scale, with loose fitting clothing reflecting the inclusion of hip-hop culture. Can the sheer fabrics and exposed breasts reflect the de-puritanization of America?

“A display of breasts is a display of power,” explains Bambi Breakstone, Fashion Department faculty at the School of the Art Institute of Chicago. The woman wearing those designs is “showing that she is confident, comfortable, and powerful.” Breakstone related the sheer fabric trend to the images of Etruscan women, who were portrayed bare breasted, and were “equal to men in culture.”

We are a country with the highest legal drinking age, an army of casserole baking soccer moms, beer drinking Joe-the-plumbers, and a thought constricting Bible belt. A few years ago the media covered the appearance of Janet Jackson’s nipple as if the world was ending. Fashion wise, one only has to compare American beaches with European ones to see the relative degree of our conservative nature.

However, there are signs of awakening liberal mindedness. The Green movement is catching on, Barack Obama won the oval office, and his idealism is spreading to many Americans. Could it be that this awakening is reflected in or even predicted by fashion?

This powerful attitude may encourage people to be more expressive of their ideas and to get their voices heard. It is especially critical for young people, because a combination of attitude, idealism, and truthful, unbiased information is often a recipe for significant social change. 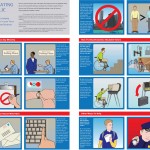