SAIC Student and Faculty Speak Up for Barack Obama

Just weeks before the presidential election, a group of writers, including several members of the SAIC community, got together at the Chopin Theatre to speak, read and raise money for Barack Obama.

On October 15, just weeks before the presidential election, a group of writers, including several members of the SAIC community, got together at the Chopin Theatre to speak, read and raise money for presidential candidate Barack Obama.

The event, Writers for Obama, was organized by author Sandi Wisenberg but featured fifteen other authors, both local and visiting, who each gave a five minute reading. Rosellen Brown, James McManus and Kevin Coval, all faculty at the School of the Art Institute of Chicago, read at the event as well as SAIC MFAW student Kristiana Rae Colón. Writers for Obama featured a silent book auction as well as a live auction of political cartoons and comics donated by local artists.

“We’re under pressure from the fundamental religious right,” explained featured author Stuart Dybek. He spoke about how he felt the country had fallen into disrepair in the last eight years and added, “it’s good to see this kind of solidarity.” Dybek called this presidential election a critical political juncture.

James McManus shared Dybek’s sentiment calling this election “the most important election of my lifetime.” McManus went on to say that he believed that Obama would not only help restore American honor domestically, but also abroad. “[Obama] is earning people’s trust,” said McManus.

McManus teaches Obama’s memoir Dreams of My Father at SAIC because he feels it is one of the best books ever written. When contacted by Wisenberg, McManus said he was enthusiastic about being part of Writers for Obama. “I’m honored to participate in anything to help [Obama] win,” said McManus.

“It’s really marvelous,” Rosellen Brown said about the event. Brown said that she advertised the event in her classes. She added that one of the aspects she loves about SAIC “is that faculty and students were allowed to talk about politics.”

Brown remembers meeting Obama twice, once in Hyde Park and again at a convention in New Hampshire. Brown said that Obama remembered her and her husband, despite only meeting them briefly months prior. “He has such focus,” Brown said. “He remembers everybody he’s met. That takes such skill.”

Brown’s graduate student Kristiana Rae Colón also read at the event. “I’m honored to be part of an event for Obama,” said Colón. “Everybody had a phenomenal performance, and raised a lot of valid concerns and issues.” Colón read two poems, one of which she wrote about Governor Sarah Palin’s moose hunting.

Moose hunting was also the subject of a performance by author and editor Sara Paretsky. Paretsky claimed to be one of the very first Obama supporters adding that she donated money to him “two years before” he began his US Senate campaign. “I think he’s great and will be another Lincoln,” said Paretsky.

Wisenberg said she first got the idea for Writers for Obama from her friend, who organized a similar event in Massachusetts. She characterized the many events being held by writers in support of Obama as a “national movement.”

Wisenberg’s target goal was to raise $5,000 for the Obama campaign. By the day of the event advanced ticket sales had already raised $4,300 and she estimated that another $200 dollars was collected at the door. 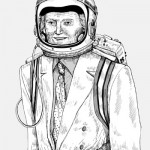