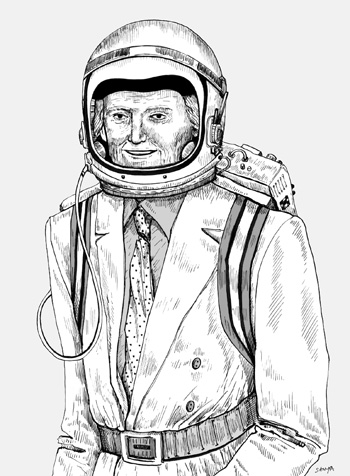 Author Tom Wolfe, best known for his books The Electric Kool-Aid Acid Test and The Bonfire of the Vanities, was honored by the Chicago Public Library this month. Tom Wolfe was a writer at the forefront of the 1960’s movement known as “New Journalism.” Wolfe’s journalistic approach applied literary strategies typically used by fiction writers to non-fictional works, relieving him of any pretense of objectivity.

Wolfe spoke the evening of October 16th at the Harold Washington Public Library. Wolfe accepted the Carl Sandburg Literary Award Tuesday evening for at his novel The Right Stuff.

Following a book signing, Wolfe, clad in his trademark white suit, sat down for a discussion with Chicago based television personality Carol Marin before a large crowd of Chicagoans.

Wolfe shared that he used journalism and non-fiction as a tool to write. He explained, “I found that I could not write a novel using my imagination. I don’t have that much. Nobody does. There is no way to equal this bizarre movement that is happening in world history. It certainly is bizarre.”

When asked if there were any choices he had made professionally that he regretted, Wolfe spoke about an incident that occurred while he was writing The Electric Kool-Aid Acid Test. “There was something I saw with the Hells Angels…What we knew then as a ‘gang bang.’ I knew [the woman and the husband] involved. Knew their names. It was a horrible thing. I decided that I couldn’t write about it. After the book was [initially] released, Ken Kesey didn’t say a word about it. When asked about the book years later in an interview, Kesey said, ‘Wolfe got most of it right, except he tried to be nice.’”

Wolfe went on to elaborate on his belief that it is a journalists’ duty to report what he/she sees. “When I see a writer bending their principles for political reasons, I look upon that person as a worm. [They] are reduced to a PR person.” His comment was met with an uproar of applause from the audience.

When asked about his trademark white suit, Wolfe spoke about writing for a Nascar driver in North Carolina in the 1960’s. Wolfe decided that, “since this [was] Nascar, I should dress casual.” He opted for a green tweed suit. One day, the driver that Wolfe was covering approached Wolfe and said, “Tom, people keep saying to me, whose that little green man following you around?” This inspired a change of wardrobe that was a little more pleasing to the eye, but peculiar nevertheless. He adopted the white suit, to establish himself as outsider among his subjects – what he calls the “Man from Mars approach.” Wolfe said, “I was covering rock and roll, demolition derby’s…I was just a nice boy from Virginia.” He wanted an outfit that said, “I don’t know what on earth you’re doing. I’m very different from you. Tell me what’s going on.”

When asked about a recent visit to the Art Institute of Chicago, Wolfe expressed his distaste for modern art, citing its “imagination without skill.” Wolfe went on to say, “If you look at the shear level of skill in the 19th Century French artists…Something terrible happened today [in modern art]…[and] supposedly, this is the age of progress.”

He went on to proclaim a dislike for Picasso’s work, citing Picasso’s incomprehension of perspective and his inability to draw hands. “If I didn’t have those skills, I hope that I would have the brains to dream up cubism.”

He also stated his distaste for three contemporary authors whom he refers to as his “Three Stooges”: John Updike, Norman Mailer, and John Irving. He did praise the work of Richard Price and Carl Hiaasen, and stated that he considers Hiaasen’s Strip Tease to be among the most significant books written in the past 25 years.

When asked if he ever blogs, texts, or twitters, Wolfe stated, “I don’t do any of those things, I don’t even know what ‘twitter’ is.” Wolfe says his process as a writer has “been reduced to” writing with a word processor, but that he stuck to his type-writer for many years after they became technologically obsolete. As a result of a broken finger, Wolfe wrote his novel I am Charlotte Simmons with a ballpoint pen. He is using a word processor for his current project, Back to Blood. “It’s not wet blood,” said Wolfe, “it’s bloodline. It’s essentially about immigration.”

The book is about the Cuban immigrant population in Miami, which, according to Wolfe, consists of “more than 50% recent immigrants in the past 50 years,” and explores how,“ they came to dominate the city through the ballot box. Only in this country, could people from a different country, a different language…come into power through the ballot box.”

Back to Blood is scheduled to hit shelves in 2009.

SAIC Student and Faculty Speak Up for Barack Obama

One Response to Tom Wolfe on Electric Kool-Aid, Gang Bangs, and Nascar