Each week when Marco Ken gets his paycheck, he usually deposit some of it in the bank and then assertively blow most of it at a few choice dollar stores in his neighborhood.

I recently got a job where I make more money than I ever have before. To most people my wages are not exceptional, but it’s at the point where I told my little sister about how much money I make and she said it was “big people money.” And although my job is laden with responsibility and is aggressively paced (like action sports), I still do not feel like a big person.

One precipitating factor in my inability to fully mature is unstable budgeting. I have decided that no matter how big my paychecks are, I will not save any money. Each week when I get my paycheck, I usually deposit some of it in the bank and then assertively blow most of it at a few choice dollar stores in my neighborhood.

The more money I make, the more cheap crap I buy. Like a renewable energy source, my paychecks cause the stockpile of beach towels, rip-it sodas, plastic belts, non-working umbrellas and lion tapestries to grow, while I am continually wondering what I spent $80 on again. With that in mind, I, your concierge of class, will accompany you on my typical Saturday afternoon Dollar-Store Marathon.

I went into Dollar Mark alongside my buddy Tim with the intent of convincing him to buy some tank tops. Like most pre-tankers at the beginning of the summer, he was reluctant, so I pressed him. “Tank tops are the new black.” And, “You’re going to be an innovator in the Gurnee clothing scene, my man!” And, “You’ll be a fashionista, dude, babes love fashionistas!” I was unrelenting.

Eventually all my prodding helped him to understand the excitement a person can have when their shoulders are exposed to the glorious rays of the midsummer sun while still being fully clothed. Dollar mark is often the first stop on my tour and typically the most fruitful. Most clothing items here are priced sub-$4 and this hot spot has bottle rockets all year round if you prove yourself to be the right clientele.
**Hot Items**
Chanel Rings $1.99
THE HUNTER Briefs $3.99 for a three-pack

Fairly often I take my 36 passenger public limo here (the Broadway bus). It’s my go-to spot. The housewares section of this dollar store is impeccable. Pots and pans, a whiffle ball set—all sorts of fancy items for adults and children. More interesting than the store, though, is the Burger Delight on Wilson and Sheridan.

At work I am a dedicated snacker. On a typical day, I clean out the cabinet labeled “Ho-Hos,” and now I’ve become so committed that the Ho-Ho restocking lady from Warsaw is speaking better English because of my increasingly frequent visits. I’ve developed a system: First, Ho-hos as a breakfast item, as their consistency resembles a donut. Then I pre-game lunch with some Slim Jims, and cap off my afternoon by moseying down string cheese alley before riding the Broadway bus home. When a normal session is over, I feel sluggish and I desire some sort of caffeine-based reprieve. This aid does not come from the palmless hands of S&L Dollar Plus.

S&L Dollar Plus is “Plus” as in price, not “Plus” in value. This dollar store is the most outstandingly unimpressive crap emporium I have yet visited. I saw a few pairs of Air Force Ones outside, and a Tupac shirt that I planned on purchasing because of the $4.99 price tag, but as I went inside, I realized the price was a myth. I said “$4.99” and they looked at me like I was taking crazy pills. I might as well have asked to purchase a mystic dragon-riding kit, or a wholesale catapult, because neither S nor L would discuss T shirt prices less than $9.99 with me. $9.99? This is a dollar store but the L here stands for luxury. Markedly unimpressive.
**Hot Items**
None

My father has a shark tooth necklace. My father has leopard print bed sheets. My father has a bearskin rug. It is real bearskin. I have trouble with these items also: I remember being sixteen years old, and I had just begun to live with him after not speaking for over a year, and shortly after he got comfortable with my presence, he started having girls over again. I would be attempting to perform some sort of school-related task and he would go into his room with his latest ‘lady’ and turn on Rod Stewart or Credence loud enough that I wouldn’t be able to hear the lock click on his bedroom door.

Eventually we came to an accord, and he would give me twenty dollars and tell me to go stay the night at a friend’s house whenever he was going to have a date. It was amazing. My friend’s parents were awed at my father’s continual and often bi-weekly euro-prowess, while I just didn’t want to think about it and spent the money on pizza. “Papi’s boning some chick again” was the response I typically gave when people asked me why I was wanted to spend the night at their house on a Tuesday.

As I passed The Arizona Dollar Plus and the two Virile Lion Tapestries that hung in its front windows, I was reminded of my father and his brilliant Euro trash decor. I’m sure if he were making these dollar store rounds with me he would say in his Swiss accent, “You know, I think these rugs things are kind of cool, you know?” Albeit the Arizona Dollar Plus is “kind of cool,” it doesn’t have a wide selection of goods. But it’s not about the size of the selection, it’s about the presentation, right?
**Hot Items**
Lion Rug, $36
Chicago Touring bag $2.99 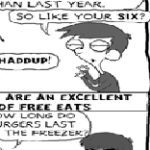