A lesson in ruining masterpieces: art vandalism in recent times.

In the few seconds it took the security guard to cross the museum gallery, an unidentified German woman pulled a knife from her handbag and made mincemeat of a Lichtenstein painting in western Austria in early September.
Roy Lichtenstein: Classic of the New, a three-month exhibition of the American pop artist’s work at the Kunsthaus Bregenz, was as uneventful as any retrospective when, on the final day of the show, the 35-year-old woman attacked Nude in Mirror.

Four 12-inch-long slashes now mar the surface of the painting, which was fortunately insured for $6 million by the owner, The Rush Family Collection in New York. Police spokesman Thomas Prodinger reported that the vandal was held down by the security guard and another visitor (who knew a museum visit could be that exciting?!) until police arrived on scene.

She is reportedly undergoing psychiatric treatment and faces charges for grave property damage, and for attacking two police officers during questioning, scratching one on the face and biting another in the leg. Interestingly enough, her purse also contained a screwdriver and a can of red spray paint. So why slash the American pop master’s painting? She evidently thought it was a fake.

Art vandalism is nothing new. In fact, Medieval Greeks were the first to develop a term to define those who attack sacred images by combining words meaning “likeness” with “breaker or to break.” During the 8th and 9th centuries, countless Christian paintings and sculpture were destroyed throughout the Byzantine Empire during the original Iconoclast Period. During the Protestant Reformation, much Catholic art—stained glass windows, mosaics, church interiors, altarpieces, and statues—fell under the iconoclast’s tools of destruction. In the Islamic religion, because of the prohibition against figural decoration, some Muslim groups have on occasion damaged devotional images, one of the more recent examples being the destruction of frescoes and the statues of Buddha in the Bamiyan province of Afghanistan by the Taliban in 2001.

Many of today’s art attackers, like the Nude in the Mirror slasher, are more vandals than iconoclasts. True iconoclasts seek to weaken religious or political institutions by attacking the dogmas and conventions central to the institution’s authority. This is why Byzantine Emperor Leo III ordered all icons of Jesus, the Virgin Mary, and the saints destroyed in the 8th century, or why John Calvin, a leader of the Protestant Reformation, supported the removal of Catholic art in existing churches to be adapted for Protestant worship. Rather than opposing any particular policy or action, iconoclasts, in the true sense of the word, resist the entire institution itself.

Look up “iconoclast” in the online version of Roget’s New Millennium Thesaurus and the search returns words like “beatnik,” “hippie,” “nonconformist,” “rebel,” “weirdo,” and my personal favorite, “wave maker”. Sometimes the vandal attacks as a reaction to popular culture or ideals. Take for example Mary Richardson, a militant suffragette, who in 1914 meat-cleavered Velaquez’s The Rokeby Venus in the National Gallery of London in protest of the arrest of Emmeline Pankhurst, the leader of Britain’s suffragette movement. In a statement released after her arrest, Richardson explained, “I have tried to destroy the picture of the most beautiful woman in mythological history as a protest against the government” for its role in “the destruction of Mrs. Pankhurst and other beautiful living women.”

In 1989, there was the man who entered the Dordrechts Museum and slashed ten Dutch works in less than two minutes in protest of workers from foreign countries living in the city. He justified his actions stating, “By letting all those foreigners live in our country, we are throwing away our Dutch culture—thus, there’s no need for those paintings anymore.”

More frequently, the modern art vandal lashes out selfishly and independently to draw attention to himself (the vandal is most often a man, and commonly a frustrated artist). Usually the vandal waits patiently near the damaged work to be caught and to deliver a statement of explanation. Sometimes UFOs make him do it. Other times, he thinks the work is overrated. Occasionally, he wants to call attention to his own artistic production. More often than not, though, the vandal simply doesn’t like the work.

You be the judge

1972 A mentally disturbed geologist, Laszlo Toth, enters Saint Peter’s Basilica and, approaching Michelangelo’s Pietà, pulls a hammer from his clothing, pummeling the famous sculpture while shouting, “I am Jesus Christ!” Toth explained, “Today is my 33rd birthday, the day when Christ died. For that reason, I smashed the Pietà today. I did it because the mother of God does not exist. I am Christ. I am Michelangelo. I have reached the age of Christ and now I can die.” Awaiting trial, Toth disappears. In 1975, he resurfaces in an Italian hospital and is deported.

Ruth van Herpen kisses a white monochrome painting by artist Jo Baer in the Oxford Museum of Modern Art, smearing her lipstick across it. In her trial hearing, she explains, “[The work] looked so cold. I only kissed it to cheer it up.”

1986 Ellis Nelson walks into Minneapolis’s Black Forest Inn, pulls a pistol from his coat pocket and, while patrons dive for cover, fires on a large Richard Avedon photograph. The two figures of the photograph, women attending a Daughters of the American Revolution convention, were both pierced by bullets. “That photo always bugged the hell out of me,” Nelson is reported saying.

1991 Failed Italian painter, Pietro Cannata lops off the second toe of the left foot of Michelangelo’s David. Oddly enough, restoration of the toe led scholars to the origins of Michelangelo’s marble. Years later, Cannata’s record of art vandalism also includes an attack on a Pollock painting, indelible ink scribbles on a statue in the Florence museum, and painting a monument to war dead in Prato black.

1996 Jubal Brown eats blue cake icing and blue Jell-O in order to projectile vomit blue onto Piet Mondrian’s Composition in Red, White, and Blue hanging in the MOMA. “I found its lifelessness threatening and it made me sick,” the twenty-two year old art student said, as quoted in Toronto Globe and Mail. Six months earlier, he vomited red on Raoul Dufy’s Harbour at le Havre in the Art Gallery in Ontario. “It was just so boring it needed some color.”

1998 Nudist activist Vincent Bethell paints a large dollar sign in yellow paint over Rembrandt’s Self Portrait at the Age of 63 in London’s National Gallery. Wearing a woman’s dress, he attached the tubes of paint to his thighs with rubber bands and waited over fifteen minutes in front of the work before disrobing and marring the painting. In a 2002 letter addressed to Damien Frost, Bethell writes, “I was attempting to highlight the injustice of criminalising public nakedness. It was a naked protest that attempted to gain the right to be naked in public.” 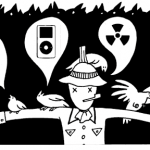 Birds have the sniffles, and we’re fresh out of...