While race and class in the United States are being discussed in the midst of the Hurricane Katrina catastrophe, an exhibit at the Chicago Historical Society shows us a part of history that graphically brings up many of the same issues. Without Sanctuary: Lynching Photography in America, up through December 4 at the Chicago Historical Society, is a haunting look at lynching in America.

A circular platform with a smoky, watery light shines down onto written text by author Lois McMaster Bujold: “The dead cannot cry out for justice; it is a duty of the living to do so for them.” The names of numerous lynching victims are spread across the adjacent wall.

When I attended the Without Sanctuary exhibition, I was the only person in the exhibit space. This exhibition, which consists of photographs collected by James Allen and John Littlefield, allows viewers the opportunity to acknowledge and remember a disturbing period in American history. Although it is hard to believe, participants and onlookers used the photographs as souvenirs—to document, record, and remember the ritualistic and fetishistic act of lynching.
Without Sanctuary is an explicit reminder that oppression and fear continued for African Americans decades after slavery ended. In addition to photographs, viewers see vivid reminders of this culture of fear through the display of a Ku Klux Klan robe and mask from 1868, as well as a hand-carved whip showing an intricately-carved, screaming face of an African American man.

Between 1882 and 1968, an estimated 5000 African Americans were murdered, many as victims of lynching, although many more deaths probably went unreported. Although it peaked in the1890s, documented lynching went well into the 20th century. Lynching includes burnings, hangings, shootings, and fatal beatings. People were lynched based on race, ethnicity, and beliefs. The practice was not limited to blacks, although they were the most targeted race. In 1891, eleven Italian immigrants were murdered in New Orleans, in the largest mass-lynching in American history.

The stories and images that viewers see are extremely disturbing: burnings, torture, mutilations, and castrations. The perpetrators rationalized their actions by accusing the victims of crimes that were most likely not committed–often murders or alleged rapes of white women. Those acting believed that their actions were ordained by God. When seeing the violent images of corpses burnt and hanging from trees, we have to keep reminding ourselves that the photos exist because people wanted to document and remember their acts of ritualistic violence. These acts were often public spectacle, with entire communities turning out to watch. This exhibit is about those who enacted the violence as much as it is about the victims, and the stories and images are terrifying.

On November 9, 1909, William James, alleged rapist and murderer, was lynched in Cairo, Illinois. A white mob abducted him from law enforcement and hung him on a still arch with electric lights. They severed his head and placed it on a pole and then removed his organs for souvenirs, finally setting his body on fire after riddling it with bullets. On January 12, 1916, 200 men dragged John Richards from his cell in Goldsboro, North Carolina and shot him. In October of 1916, Anthony Crawford, a wealthy farmer of Abbesville, South Carolina was lynched after asserting himself in an argument with a store clerk about the price of cotton.

The lynching photographs are items of material culture, which illuminate horrific acts in American history. The Without Sanctuary exhibition makes the viewer confront and accept the realities of racism, fear, and the lynchmob mentality.The final portion of this exhibition shows the history of anti-lynching activism and reform by such leaders as journalist Ida B. Wells-Barnett, the black press, the NAACP, The Commission on Interracial Cooperation, and the Association of Women to Prevent Lynching. Courtroom sketches from the Emmett Till trial, where the men accused were promptly acquitted by an all-white jury, are the last part of the exhibition.

Without Sanctuary provides a startling reminder of issues of racism today—which have been the subject of much discussion in the wake of the Hurricane Katrina catastrophe both in news coverage and in government response. The captions of two similar newswire photographs show us just how ingrained racism is into our culture. A recent Associated Press article included a photograph showing an African American man carrying a garbage bag of food through chest-deep floodwaters, and was described in the caption as “looting.” A nearly identical photograph from Agence France-Presse, shows white people wading the floodwaters with bags of food and refers to them as “finding” food.

In June 2005, the Senate offered an official apology to the descendents of victims for never enacting federal legislation banning lynching. According to the June 23, 2005 Atlanta-Journal Constitution, the Without Sanctuary exhibition inspired Sen. Mary Landrieu (D-Louisiana.) to introduce this official apology.
As I left the exhibition, I took a small card, which said, “I will remember William James, lynched 1909, Cairo, Illinois.” Although the exhibition space was empty when I entered, when I left the room was full—full of ghosts who have finally returned to speak to the living. 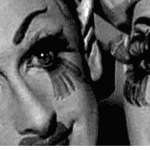 One Response to Without Sanctuary