The New York Underground Video World of Tom Rubnitz is a gem of the Video Data Bank that you probably won’t see in any of your classes this semester.

The New York Underground Video World of Tom Rubnitz is a gem of the Video Data Bank that you probably won’t see in any of your classes this semester. An expert in genre manipulation and campy hilarity, Rubnitz’s films could only have come from the eccentric East Village during the ‘80s New York art scene. Having grown up in a generation of television junkies as opposed to museum-goers, Rubnitz felt compelled to appropriate more from the mass media than the art world. He mixed drag queens with cooking shows, saluted motherhood with Frieda, the wholesomely creepy “living” doll, and consistantly offered us a portal into unique and comical escapism.

Rubnitz worked with many talented musicians and artists in his films and videos, including the late John Sex, Happi Phace, the B-52s, Lipsynchia, Ann Magnuson, Quentin Crisp, Michael Clark, and Lady Bunny. Viewers will surly be enthralled by John Sex’s unique musical talent and sock stuffed crotch as he performs with the Bodacious Ta-Ta’s in two music videos and is uncovered in a rockumentary called John Sex: The TrueStory. Rubnitz loved Drag Queens, which many of his films are a testament to. Wigstock: The Movie documentsLady Bunny’s annual event, “storywig-in,” a parody of Woodstock (particularly noteworthy is the rendition of Janis Joplin). And in the Drag Queen Marathon participants are pitted against each other to see who can endure relentless photo opportunities.

These glitzy, hallucinogenic shorts paint a loving portrait of the East Village, a regular of nightlife hot spots like Club 57 and the Pyramid Club. Since we live in an equally politically bleak time, Rubnitz’s films may feel strangely contemporary to us as they offer a glimpse into the repressed underground hedonism of the New York underground scene during the Reagan era. Alternative artist spaces, which were characteristic of the East Village, weren’t simply stepping-stones to becoming commercial galleries. They fostered a genuine alternative to the dominant culture of the time, of which ‘Sexy, Wiggy, Desserty’ is an obvious testament. As Rubnitz stated, “I wanted to make things beautiful, funny and positive – escapes that you could just get into and laugh through. That was really important to me. I felt like good could triumph over evil.” 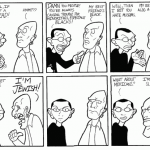