As part of the SAIC Katrina Student Relief Fund, Assistant Director of Student Affairs Ingrid Messer organized donation tables in the three main SAIC lobbies from September 19-23. The tables accepted monetary donations to assist new and existing SAIC students and families affected by the Katrina disaster, as well as displaced elementary school students in Chicago. Providing incentive to the less empathetic amongst us, the Flaxman Library and the Media Center both offered to forgive fines and late fees in exchange for donations to the fund, and on Friday, the collection tables held a bake sale.

According to Messer, the money collected had reached about $2000 by midday Friday the 23rd (the most recent data available when this issue went into production). The Student Government has pledged to match the portion of the donation directly benefiting SAIC students. Student Affairs will assess the needs of the students and families, and direct the money as needed. They are also planning to hold another fundraiser later in the semester, as the specific needs of the situation are identified.

The Gene Siskel Film Center held its own Katrina relief benefit on September 25, with a preview screening of the new Johnny Cash biopic Walk The Line. Roger Ebert and Richard Roeper hosted the $100-per-ticket event, with proceeds going to the American Red Cross.

Hurricane Katrina has affected 46 colleges in Mississippi, Alabama and Louisiana. Some have withstood millions of dollars in damages, like Pearl River Community College in Poplarville, Mississippi, whose repairs are estimated to cost $15-25 million. Most have had to deal with locating students, faculty and staff who were forced to evacuate the area. Websites for area colleges document efforts by scattered administrations to return to full operation as quickly as possible, seeking students who might be available to return by midterm. For schools that were affected by the hurricane but able to resume their fall schedule, classes are being held online, in portable classrooms or in other buildings and campuses. But at least 14 campuses in Louisiana and Mississippi will not reopen until the spring semester, or are closed “indefinitely.”

To alleviate the problems of an interrupted education, SAIC has been rapidly interviewing and enrolling students from the Gulf area. The school has announced that it will provide free tuition and housing for the fall semester to affected students on a limited, case-by-case basis. As of September 23, SAIC had accepted four new graduate and 11 new undergraduate students. Three current students from the affected area are also receiving assistance. Admissions representative Scott Ramon said, “We’ve been meeting with students every day; trying to act as quickly as possible.”

Some of the new students are looking for a school to tide them over for a semester until their school reopens, while others may choose to transfer permanently into the school. “We are trying to tailor schedules for them,” said Ramon, to provide classes that conform to their ongoing art school experience.
It is a frightening and disturbing time. “One [prospective student] we were talking to we haven’t been able to get in touch with since it [Katrina] hit,” said Ramon. Admissions had a cell phone contact number which seemed to have been affected by the hurricane: “I don’t think I’ve ever heard a busy signal on a cell phone.”

Ramon described how, during the interview process, “we’re listening to the stories of their experiences; how do you gauge such large amounts of loss?” One student had collected her paintings since the age of four. She was studying health care in college, but when she discovered that her paintings had been destroyed, she realized that her true passion lay in art. Ramon described the situation as trying to achieve a kind of alchemy: “Whatever poison has happened, we’re turning it into something positive.” 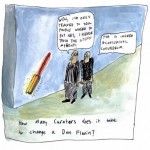