Excerpts from the diary of an American photographer in Japan: a photo essay

Story and photography by Drury Brennan

I am five minutes away from the steel jungle of Roppongi in a friend’s house. We threw away plans to have another raucous night at a bar or four.
Instead we make a steak curry.

Today I had a “photo shoot” to work on the indescribably strange. We met the clients at a coffee shop, which wasn’t like any other kind of coffee shop I’ve been to.

In a subtle, anonymous side street of Roppongi, in one of those anonymous cramped apartment buildings that only those who’ve known Japan know about, we entered a room. There was a naked mannequin, strikingly outdated and sporting fur patches on her scalp from where her black wig had been torn off in late 1992.

Two beds in the back of the studio apartment were layered with child-themed bedding and stuffed animals from the 100-yen shop. They put a dress on the mannequin and wanted me to light and photograph it. I had a microphone stand, two clamp-on lights with 100w light bulbs (a recipe for photo disaster) and a generic beige wallpaper background with prominent black insulation strips near the mannequin’s feet.

What was so tasty about this interaction was the fact that because it was established that I was a ‘professional’ I was magically going to make everything look gorgeous and like a 20-page Vogue spread.
All the gaijin girls are ugly out here, with the exception of the really hot model girls… oh, who knows? I feel like a neutered moose. No one would even give me the time of day if I asked.

Today was marvelous beautiful until the ride home from Mt. Takao. My friend got tired and told me, “I have to sleep for 10 minutes. Let me rest.” So he puts on his hazard lights on a five-lane highway route, pulls halfway into the shoulder and begins instantly snoozing. Like mucus played through a didgeridoo kinda snoring. Everything is cool, but after half an hour, I kind of want to go home and take a shower and get my shit together. So I say, “Hey it’s been half an hour. You’re also running low on gas (the car was idling for this entire time). Knowing full well that I have nothing to do in the car and nowhere to go on a five-lane route through anonymous 20-unit apartment complexes, he says “Couple more minutes. Why don’t you sleep too,” and starts snoring. We have just run 30km up a fucking mountain. I am covered in sweat and mud. I am wearing small purple spandex shorts, which bring out my crabdot legs. I want to go the fuck back to where my shit is and take a shower. So at 45 minutes I say, “Hey, its been 45 now,” and he rolls over and goes back to sleep, ignoring me. And so I just say with just the slightest edge, “Can we please go? We can rest when we get back,” and ever since then it’s on edge with him. I cooked and washed dishes for us every night I’ve been here to no thank-you’s whatsoever. I go out of my way to try and work around my inherent gaijin miseries, and in return I receive this attitude of “I’m offended, how dare you?” And we were on a goddamn highway, for God sakes.
And now the guy who was over for dinner is sleeping on my friend’s couch. He was asleep when I got back from the market at 9:30, sprawled out for the night. And my friend is asleep downstairs, making a polyphonic mucus chorale of a snore. It is obvious I don’t understand about Japanese people and their need to sleep wherever they are. I need to make some different friends here, NOW.

Uncategorized Excerpts from the diary of an American photographer in Japan: a photo essay
« Previous Story 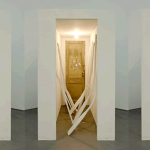 Terror at the MCA